Shadow in the Cloud Is a Worthy Power Fantasy
An Anarchists Guide to Being a Design Student
Technology February 9, 2021
Share

Over the holidays, I was lucky enough to get my hands on the Oculus Quest 2, which is the perfect way to pacify teenage nephews and terrifying toddler nieces. The Facebook produced VR headset currently stands as the best in class for standalone VR use. It’s almost shockingly easy to pick up and play compared to its wired counterparts.

The process of setting up only requires you to download the Oculus app to your phone, sign in to your Facebook account and pair to your headset. That’s pretty much it! When you put the headset on, it’s comfortable with various straps you can adjust to take the pressure off the front of your face. I might still need to adjust it though, since once or twice in a particularly strenuous game of Pistol Whip I lurched and the headset slipped down my face, resulting in me getting instantly filled with imaginary bullets.

The lenses can be snapped into three preset positions to account for how far apart your eyes are and two buttons on the headset itself control volume and power. Although the power button wasn’t something I ever needed to really use, putting it down and walking away would put it into sleep mode, while bumping it or picking it back up would make it happily chime and wake up. Battery life is solid for VR, around 3 hours, which is decent enough for a session length. A simple USB-C cable is used to keep it juiced up. 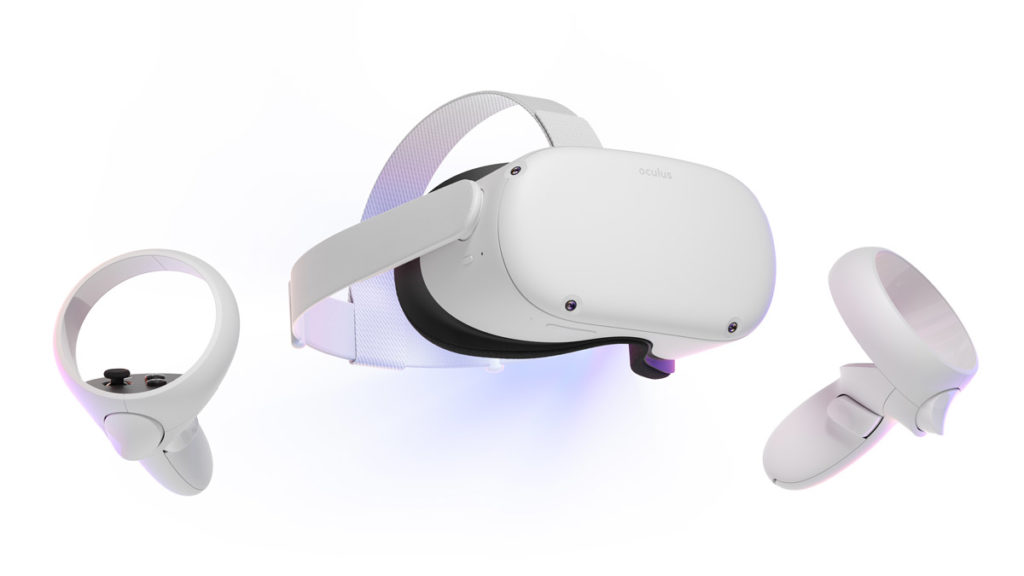 In the weeks I’ve used it, controller life hasn’t had to be addressed once. I had trouble mirroring what was happening in my headset with the app or PC, so guiding newbies through menus required a certain level of memory training and visualising where they might be, but the kids figured it out quite quickly anyway.

The resolution is great, 1832×1920px per eye, which is enough to mitigate the screendoor effect the last gen of headsets had. It’s FoV is nothing to write home about, and will change depending on your IPD (interpupillary distance (how far apart the centre of your eyeballs are)).

The experience of how the speakers work is as seamless as putting on the headset itself, as it’s able to pump sound to your ears without the need for headphones. Sound leakage can only really be picked up by people immediately beside you when the room is quiet.

Honestly the Quest 2 firmly stands in the realm of the next generation of VR headsets, and its pricepoint and ease of use makes it perfect for people wanting to jump into VR without the fuss of owning and wrestling with a gaming PC.

You get maximum bang for buck, and to get better you’d have to splash out at least double the price. This is an easy recommendation for anyone looking to get into VR.

16 Thoughts on Hands on with the Oculus Quest 2