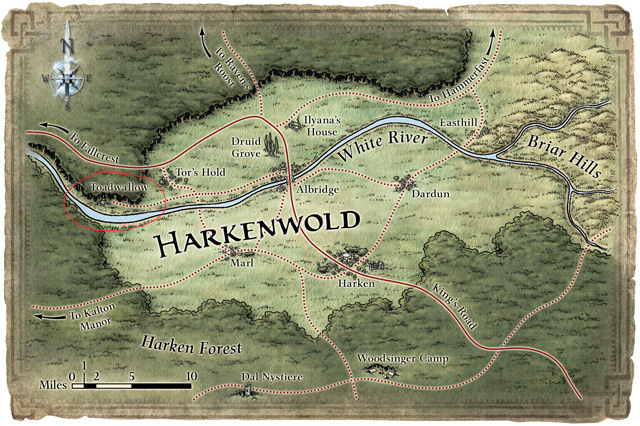 Arriving back from their last escapade to Dar Gremath, the leader of the rebellion against the Iron Circle, Greek & Puddle were offered some Healing Bracers. Gremath said something about not needing them anymore, since he wasn’t getting his owns hands dirty these days, and figured his pair of insurgents would need them more than him.
Their next goal in freeing up the rebellion around Harkenwold meant going to the western corner and freeing up Tor’s Hold from a pack of Bullywugs that had formed some sort of pact with the Iron Circle. They had free reign on terrorizing all the locals in the area.
Greek & Puddle set off along the edges of the White River. On the southern bank they spotted a windmill with people wandering around it. Greek swore that there was a pile of dirt or something outside the mill. But Puddle said it was a bear. The people shood the bear into the mill and disappeared out of sight. Whatever, continuing on they saw a small settlement of Halflings, living out their life on the edges of the White River. They all smiled and waved and for a moment they managed to forget that they were on a mission of extermination.

A small stream fed into the river and the two heros followed it to its source, a small waterfall coming out of a cave. All seemed quiet so Puddle gave Greek a boost and then clambered up the waterfall himself. Puddle spotted some sweet Fungi which he knew all sorts of things about. He rushed into the cave to grab ’em. Alas! A trap. The Bullywugs had been hiding in the shadows of the cave, right next to the fungi. A protest about how high his passive perception was flared up for a moment, but a DM won’t be held down by anything like lippy players and rules. Roll for initiative! The bullywugs barreled forward, hoping to lay their enemies prone and poke ’em with their spears. Unfortunatly they ended up getting turned inside out by the newly leveled heros. During the fray Puddle almost stepped backwards into a pool of water. Glancing upwards he saw a brood of Stirges hanging from the ceiling. They were stiring slightly. Last time our hero’s came across Stirges Puddle got covered with them and almost met his demise. Greek tried shushing the Bullywugs from being so noisy, the unthoughtful little bastards, do they want the heros to die or something?
To no avail, they stirges stirred and chased Puddle around while Greek dealt with another set of Bullywugs. They met up again after killing their respective obstacles, Puddle still holding his mushrooms firmly in one hand, Greek covered in slimy frog blood.

They snuck around the cave, avoiding the main hall as much as possible. Greek got excited when she thought she saw more mushrooms and rushed in, freaking out another pair of Bullywugs who had been waiting for her to come from the other direction. Puddle bustled to try and keep up without looking where he was going, much like you would when your friends start crossing the road unexpectedly and the fear of being left on the wrong side of the road and facing social shame and rejection overrides the usual common sense of looking where you’re going.

Sure enough another encounter ensued. Two slimes slid out a pit, ready to melt some delicious organic substance. More Bullywugs came hopping over to back up their friends. These were the least of the heros worries. Cutting through them to stay the hell away from the slimes, who knows what they can do!

Greek let off a bolt at one of the slimes, the arrow went through and broke on the rock behind it. Eventually Puddle sent enough spells into them to dry them up into the ground.

Through all this they could hear a mighty croaking sound coming from the main “hall” of the cave. As they entered they noted a large dragon skull sitting in the middle of the cave, with another pool of water behind it. This cave definitely suits a marsh dwelling species. Greek spotted a pair of eyes looking out of the skull. She went gooey, “Maybe it’s a baby!” and went over to it. She stuck her face at the eye socket of the skull and got a good view of a crossbow pointed at her. Immediatly a blast of fire poured from the eye sockets and out any cracks that were in the skull. Greek was instantly bloodied. She shoved her dagger through the skull eye socket at the Bullywug inside and then made a hasty retreat to lick her wounds.

Puddle hiffed spells at what turned out to be the chief bullywug, who could weave magic with each croak he made. It didn’t work well in his favour, suddenly deciding that his life was important, the Bullywug broke into speaking croaky common. He pleaded that they should let him go, and in return he’ll tell them where the treasure was. Puddle and Greek thought about it for a bit, “Could we just find it ourselves?” Turns out they could have.

Behind the dragon skull was a ditch of water, filled to the brim with eggs.
“Can we raise them to fight for us do you think?”
The chieftain angrily responded “They’l grow up to want to kill you.”
“Fine.” said Puddle, boiling the water with a fireball.
While he took care of that Greek dragged the Chieftain to the mouth of the cave with a dagger at his throat. In the distance she saw a Bullywug raiding party returning. They had a prize with them, a halfling child. Hopping along beside them were two giant frogs, not humanoid like the Bullywugs, but just massive frogs.

Greek doesn’t like to remember this next part.
She proudly held onto the chief and turned everything into a hostage situation. The leader of the raiding party proclaimed he was the champion of the Bullywugs.
“Give us the child and we’ll give you back your chief!”
“Why would I want a chief who can’t even protect his own tribe. I am Uggloor! Champion!”
“What if we boiled all your young?”
“You boiled our eggs??”
“What? no I-“
Uggloor slit the boys throat and dropped him into the stream, he floated away, blood pouring into the crystalline water.
“Puddle, what do I do now?”
“I guess slit the chiefs throat.”
“Yeah I guess” ssshhink.

The inevitable fight came. Puddle got swallowed and then spat out by one of the Giant frogs. The combatants one by one fell.
Afterwards they went downstream till they found the little body. They picked it up and carried it back to the Halfling village they saw earlier in the day. The mother wept and the father attempted to keep a stoic face.

Greek brooded to herself about the death of someone so young. If she had done things different could she have saved the kid? Would she stand to let it happen again?