So I’ve been going nuts buying random junk from the App store on my new iPad 2. Sunk fourty bucks into the short time I’ve owned it so far and have hardly anything to show for it.
Random Heroes is one of those games. At least, one of those games that I actually have something to show for. (If that’s a sentence that was ever meant to exist)
Random Heroes is a platformer who’s “catch” is that as you play you slowly earn money to buy new characters and weapons, who all have different stats. There are three worlds which you have to battle through, each ending in a boss fight. You collect coins scattered throughout the world (and in baddies). If you die you start at the beginning of the level, keeping all the coins you earnt. This helps when you keep mucking up the same level over and over, you still feel like you’re achieving something. And if you suck hard enough you’l still eventually get a better gun which will help you along.

It’s made by Woblyware, a game company I suddenly realize I quite like. I’ve sunk many hours into Chubby Ninja, a game they released a while ago on Newgrounds. They just have a way of making platformers addictive, as well as sexy looking. You can play a lot of their games on their site, so go check ’em out. Actions speak louder than reviews. Don’t let the free version of Random Heroes fool you though. The iPad version has been smoothed out, movement feels a lot nicer. Also they’ve dropped the item part of the game and replaced it with more characters and weapons to buy and upgrade along the way. Monsters are now worthwhile killing as well, since they hiff all their spare change everywhere once they die. 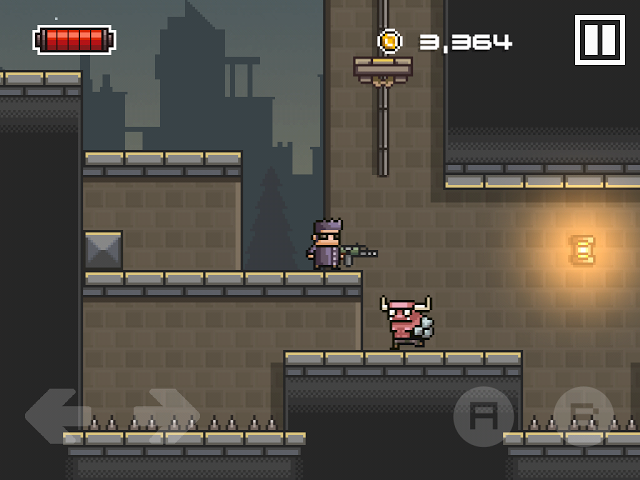 I was apprehensive at first about buying a platformer. I wasn’t sure how nice it would play on a touch device. But after playing this it has really given me hope for the genre. I didn’t feel clumsy or retarded at all as I run and jumped my way around the game. I’m considering getting League of Evil now, another game they have in the app store.
Random Heroes can be clocked in a couple sittings, but the replay-ability is quite high, since you can keep running through till you have all the guns and characters.
It could benefit from a speed run setting. But I guess I’ll just have to settle for the “Don’t die in the entire campaign” achievement.