Well I did manage to do something with my night yesterday. I spilt V in my Keyboard earlier in the day. Which super sucks! Nothing went wrong for a while, but later on while on MSN I discovered my keystrokes were registering more than one key. It got particularly bad when pressing A, S, & D would zoom me to the bottom of what ever I was doing. Not good times. But anyway, I opened the old sheela up and gave her insides a good scrub down, and eventually fixed her up good. I’m like a nerdy mechanic! Be proud of me Dad!! Or not. Heh heh, nah he loves me. Even if he thinks computers are for SISSIES.

“And as he dealt with his upper class problems, with his head hunched over bits of square plastic, on the other side of the world thousands of people were being wiped away by floods and mud slides. But he knew as long as he concentrated on important things like what his latest bands were doing or how Steve Jobs Reality Distortion field works, he would never have to worry about things like fighting for survival. But unkown to him new neighbours were moving in next door with their adorable pet “Hank, The life lesson teaching Weasel”.” 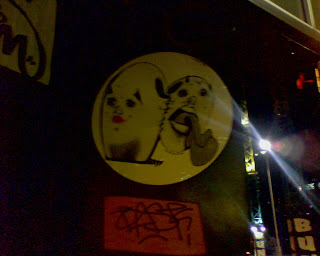