We woke up at about 8 or 9 or maybe 10 exactly. The night before we had a non meaty meal ’cause of Hanna’s unfortunate vegetarianism. It wasn’t that bad actually. But this morning we had bacon and chicken periods. Then we went over what we would be doing for the day for possibly the millionth time. And then we shot out for a huge day of doing whatever we wanted.
We decended upon Huka falls, and while checking out the map of the area we managed to watch some random back into another random in the carpark. “You were in a total blind spot!” cried the person that had artistically rearranged the back corner of Random #2’s bumper.
Here’s a picture of Huka Falls from my perspective. 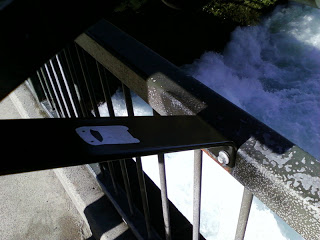 After pretending to be tourists who loved the local fauna we went to “Craters Of The Moon” as it’s lovingly called. Pretty much Taupos answer to Rotorua. It’s this spit of land which has all these vents and steamy holes from all the volcanic activity around there. In the distance we could see a cloud factory. It’s powered by Sea Lions (Hanna says that Walruses wouldn’t do as good a job), but we have to free them for some reason. Bad wages or some such nonsense a well put together union could deal with. Keir also got her kiwi here. Which made kiwi sounds funnily enough. I guess it makes more sense than the kiwi which made haka sounds. 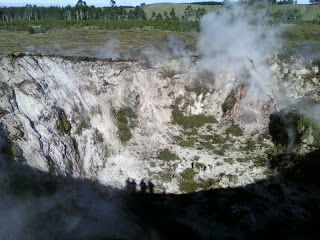 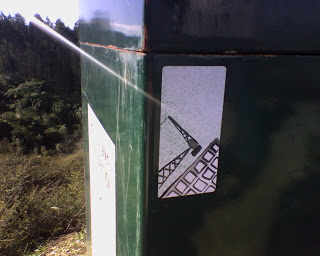 But yeah anyway, steam! Walkways! People who don’t read signs or like walkways! That was a real Lol moment actually. At one point I decided to jump in a bush, came out with a pretty sweet scratch. It took my mind off my insane itchiness though. We were pretty wasted by the time we got to the car. We got to the museum and ran around taking photos there as well. Keir didn’t know about the no taking pictures sign. Oops. Probably should have said something when I saw it. If you go down there you might still find my sweet drawing I left on the wall in the primary school corner thing.
Afterwards we treated Hanna to the playground. Thinking about it now I realize that we promised the girls they could go on the miniature train later. Looks like later is going to be longer than they expected.
Then we drove to Burger Fuel (which was walking distance away). If anyone reads this and is in either NZ, Saudi Arabia or Australia, and you haven’t had burger fuel, then you SUCK.. Wow that’s a weird place for the franchise to go, Saudi Arabia? Seriously? Oh anyway, I had a list of challenges for the trip. One of which was to get 10 numbers. Hanna was the only one to get a number, but she’s got the whole upper hand of being a pretty girl. Damn your prettiness! A guy working at burger fuel looked like some famous person and Hanna was gonna leave her number on one of the doofers for him to find. She was kinda freaking out till Matt whipped it off her and gave it to him. His name turned out to be Elliot (and not “nips” as the receipt said). He texted her back. 1 point to Hanna!
Ok what happened after that.. We went to the amazing maze and slide. So we ran around that and got bruised up by the slide that slide you out of the maze. it was pretty cool. The girls liked the slide. Matt liked figuring out the maze.
Then we knocked golf balls into the lake. That was pretty fun actually. There was a pontoon out there that if you got a ball onto (two sand hole things and a regular hole) you get some stuff or 10,000 bucks. Matt got the closest pretty much hitting the side of the pontoon.
Then we went home and chilled out watching movies and using the spa. Good end to the day. (Although my night lasted a lot longer than everyone elses, going out for a walk into town and checking out the nightlife from a distance. Saw a buncha stickers around town by their resident sticker artist. Quite colourful. No decent shots though since my camera sucks at night.) 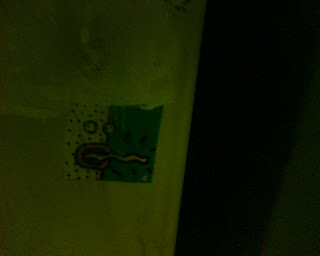