I came back from my late night walk at about 2am or so. So not really to late I guess. Anyway, I’m sneaking into me and Hanna’s room, and I’m sitting down on the bed and Hanna in the other bed suddenly gasps as if she just saw me. Scared the crap outa me. She was asleep probably having one of her freaky dreams.

I wake up at about 8 or so, Keir and Matt are moving around in the lounge getting packed up and eating breakfast. I couldn’t bring myself to get out of bed till Matt came in and we had a “HEEeeeey” off. (Say a prolonged “hey” like Tila Tequila or a male hair dresser and you’l know what it sounds like.)
Keir and Hanna Nicked a bunch of the Shampoo dispenser stuff. Lol.
We get out of the motel by 10 and went to the glass blowing place. I hadn’t really thought about glass blowing and molding as an art form before, just because it never really fit into the scope of what I have been studying etc (And it’s being a little bit of an obscure niche market). So that was a cool experience. Opened my eyes a little to the wonders of it all. Watched a guy stick his rod of iron glass into a million degrees hot glory hole. Yeah. It was called a glory hole. Go ahead giggle, this ones free, its on me. No one will judge you for being immature. Not in the comfort of your own home in front of the computer anyway.
Next stop Mickey D’s with the Aeroplane. One thing I noticed on this trip was how hungus I have been lately. I eat and eat, get full, but about an hour later I’m famished again. Hopefully this means I’m on my last growth spurt which will see me soaring at a staggering 7 feet tall. That would be cool. Being 7 foot tall. The horizon will be that little bit further away than for everyone shorter than me. 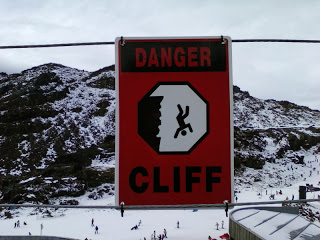 Now for my favourite part, we went to the snow. Woot! Keir hadn’t seen nice looking snow before. Just that crappy brown slush, and ice out of fridges. Hanna wanted to get up the mountain, since anyone who’s read her blog will know she’s wanted to conquer Mt. Everest. Mt. Ruapehu is a good place to start I think. You know. I can’t recall Matt’s opinion on pretty much everything. I’m pretty sure most of the time his opinion was that he was gonna drive. 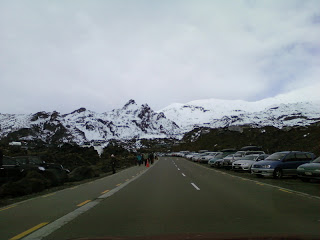 We got half way up the mountain to the lodge. Where we took a quick poo poo break. Hanna wanted to get a pic of the place so she ran down in front of it to get a good angle of it with the mountain. Then she comes running back. She was out of breath. She asked me whether I thought the air was thinner where we were. I told her she had just been running. True story.
We found a park higher up the mountain and got onto the snow. It was wicked cool. Totally nailed Hanna with those snowballs. Hanna, You’re just gonna have to be sneaky if you’re gonna want to ice me. 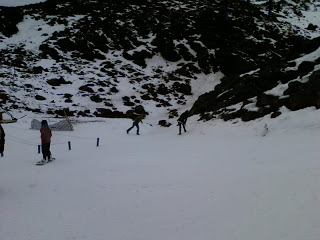 I got my sweet as Beany there! We spent more time in the store than we did on the snow. -_-, But yeah. Beany. It’s gonna have a hard time competing with my Headspace hat (Which used to be black but is now a grey). I guess in the winter it’s gonna win out.
Then it was the long slog home. The mountain was in the opposite direction of where that was, so it took us a little while more to get to Hamilton.
We got to Te Awamutu and decided to go see a movie at the cute little cinema they have there. I went there with headspace to see the Lion Witch and the Wardrobe. The theatre was about our living room x 2 size. So it’s really cozy. And half way through it had an intermission. Which was handy since everyone was dying to take a piss.
Unfortunatly it had no showings of anything we wanted to see. So we went to the Tron for the movie instead. Walking through the mall Matt reminded me that I still hadn’t asked for any numbers. I realized he was right, and fortunatly there was a bucket load of girls walking past as he mentioned it, so I picked the closest one and just straight up asked her for her number, then added as a subnote that I “Lost mine or something like that… you know.” She just sorta stopped dead in her tracks and didn’t say anything, just staring at me doing an “O” face (Not that sorta O face you creep). I think she was recapturing her motor skills cause I could see her face start to move in the negative, and her friends were pushing her along. I totally didn’t even want her number anyway… Maybe a little… sniff.

Me & Matt Watched Karate Kid while Hanna & Keir watched Knight & Day. We all came out of our respective movies pleased with our choices. Jackie Chan, come on, he’s awesome, admit it. So is Cruise, you just need to leave your gossip magazine info at the door when you see him is all.
We dropped Hanna off in the carpark of her uni. It was dark and rainy, so no one could see the tears. Then we went home, freaking out at signs that looked like shadowy strangers on the side of the road. I slept in my own bed, and it was epic.
Unfortunatly I had missed an entire week of uni, So I started the semester a week behind.
It was worth it.