Earning money online (Is it possible?)
TTAM SI 12 | 21 IS MATT
Uncategorised February 7, 2010
Share
It has been drawn to my attention dear reader that I have been neglecting you. So I shall embark upon enlightening you on what I have been Up to in the past MONTH. Or more specifically KIDS CAMP. The most hallowed and revered camps I ever go to as a leader (And consequently the only one I go to these days).
As tradition holds I generally waste myself the day before the kids come. I need to get a head start on the limping etc. Insteading of owning a kid with a set of tires, I this time unceremoniously jumped off a chicken coop, landed on the slope wrong, and twisted my ankle. At this present moment I still limp when I start walking. Peaves me off. Usually takes a little more than that. But I guess that what comes with age *drops false teeth in a frothy cup of water to disinfect them*.
The entire camp was Filled with the one quote “Ah GUUuD wone!” (Say it in an indian accent).
It was rather odd. My team seemed to own up at every team sport we took part in. Not so bad for 10 year olds versing older ones. *Is proud*
But the sad thing is, near the end we were leading by so much that for an entire day they didn’t give us any points (without telling us of course) and then forgot to put our points back on later so same lame team won anyway. Eh. “PARAAMEDICS!!!” is all I have to say to that (Our team name)
One of the team activities was to run up and down the beach finding leaders and getting bits of a memory verse of them. They were disguised, and sometimes obscured. To find out if the person was someone who was part of the game the kid had to run up to them and ask them if there was “Something that you like” and the leader would reply “Yes. Jesus.” In retrospect this probably wasn’t the best code phrase to use. Imagine your some chick sunbathing at the beach and half a dozen preteens charge you and then demanding whether there was something that you like.
With all that said and done, here are some pictures that will leave more questions than answers. 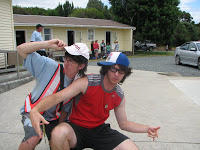 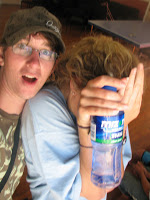 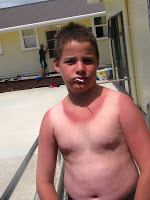 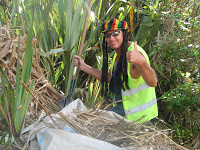 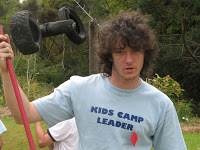