The Ball
final study block and beyond
Uncategorised June 14, 2008
Share

So I have been putting off writing this since I have had a lot of fun messing around on newgrounds and a billion other websites which I find a lot more interesting than this blog. I think thats a good thing because it means I don’t find accomplishment in reading about myself.

So lets start with wednesday(or some day) last week. Things went extreme at our host families. Pranks were flying everywhere. Alarm clocks woke people. Gloves failed to explode on exhaust pipes, condoms were strategically placed in peoples wallets and YES. I did find that one in my CD wallet thankyou Steven. It went to good use protecting Peakies Wallet, Phone and Ipod.

Cerelia took us around town on a random adventure. If you want to see what she did to our room (Which we were MEANT to have tidied up that night have a look here) and if you wanna know a little bit about the random adventure have a looksy here.

Saves me the trouble of having to write it myself =D.

Thanks a lot family, you rocked our cotton socks.

We then moved to camp Sladin. Its freezing, but thankfully we have our own Spa, which is massive, and more specifically I have my own private skate park to ride around on. I got a new deck specialy for it. it looks niiice. No more Warehouse junk for me. Man, Im far to lax with this blog entry, its bordering on commercialised mediocreness. I better tell a story quickly. So I’m at the skate ramps right. And the boys come down to check me out. Really they came just to see me fall over. Which they got. J’s videos of me flipping over made even me lol. Eddies like “Flash, Drop in off the big ones!” knowing this would be the surest way of making me cane myself. Especially since I cant even ride up and down one yet without falling over (While people are looking.)
So I Give him a swift “Neoow! screw you. I can’t even drop in off the little ones. see… Ok. So I could drop in off that. But I can’t drop off this slightly bigger one….. Alright so I just prooved myself wrong again. But this one for sure I wont be able to do…. Well I did it but that doesn’t mean I’ll do the huge one I’ll kill myself.” I clambered up and put my board on the edge. Freaking out at the height I am above the concrete. And if you know me I don’t usually freak out at stuff like that, because Im generally hurling myself down it.
There are two videos of the even which follows. One shows me saying “NO I CAN”T DO THIS.” Then immediatly leaning forwards and skating down…. then go plowing straight into the concrete which was so patiently awaiting my palm, face, and predominantly my knee. Which was giving me hell for three days. The second is a high shot of me rolling after impact, then continueing to rive in pain saying “I told you! I told you I would kill myself.

Oh yea, I came home on thrusday. Surprise. While at home I got a new Video camera to. Yay, Now I can get down to making my own version of Lord of the Rings, since they missed a bit last time it was made. Peter, you fool. Kidding. XD

So to sum up. I have finished work. Got enough money for overseas, and in general everythings turning out nicely. Now were going onto our next learning block! Time to get back into that bible. 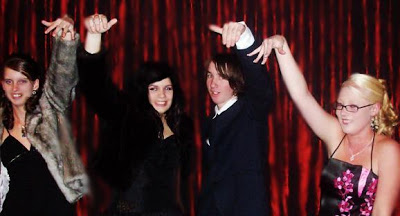