Skate Or Die
Didn't get a haircut & got a real job
Uncategorised June 1, 2008
Share

I have been putting off all week posting about this since Its been difficult getting photos off girls.

Itsa me and Lianna!

But I went with Brialee right, some of you may remember her from HM Rage from last year. Oh yea, sorry I couldn’t come, far to expensive, even though Headspace is apparently a sponser of rage. Ah well. Have fun guys.
So I was talking to Brialee via MSN a while back and she was like, dude, you should come to the ball. Later on I found out Lianna was going to it as well with a bunch of her friends. YES! A free ride there and back. lol.
So we left work early so I could sit around waiting for Mum(Lianna) to get ready. During the week I scored Dads old suit. My host brothers shirt, and Jasons shoes and Tie. It was a complete throw together. It look rather decent though, apart from the shoes not fitting with the time period at ALL.
It was groovy seeing Brialee again after all this time.
So we went to the ball. I’m going to assume that balls are pretty much the boring bit before the afterball. So I’m just gonna say we danced around to a lot of Oldschool stuff from the rock ‘n roll 50s and then a whole lot of mainstream yuck stuff.
We went back, got changed into regular clothes then headed to the afterparty, everyone had to meet outside the Popo station, where we would get picked up by a bus. We only just missed the first (Out of three) buses by like 6 people. So we were content to wait for the second, by the time it came the bulk of the munters had arrived. So theres a mad paniced rush for the doors, beers in hand. Everyone got smooshed together, I was pinned in the middle somewhere. None of our crew made it on so we decided to wait for the LAST bus. Jeeze.
We made it on thank goodness. The Afterparty was aight, it doesnt matter how you dance when there strobes going, ANYTHING looks cool. just wave your hand in front of your face and youl be amused for ages till you either have a sezure or just get tired. Once again not much to say other than drunk people are fun to spin. “its like a rollercoaster… But not..”
We got home at 4:30 and crashed. I was out like a bad batsman.
On another note, I lost my wallet, Im assuming it got stolen along with Both Hannas phones and other misc items of value at the packhouse. We have a thief in our midst. =(
Fortunatly other than my Eftpos card the only thing of value in my wallet was the little picture of me on my ID. lol. Hopefully they wont go to henderson, check out all the books in the library with my card and then dump them in the Creek. I would NOT want to be responsible for that.
Nice little sticker done by Noodle. 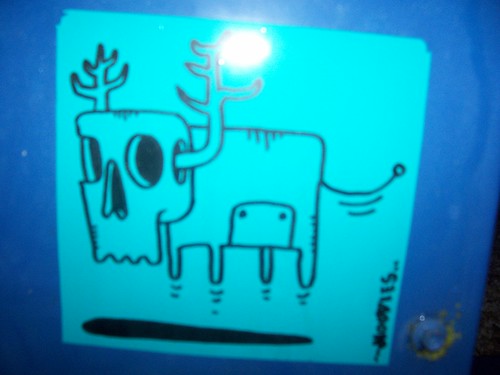 Like The Background? The Queen was designed by Component of the Cut Collective. and I have smashed my NZ Music month circles into the mix.
HAPPY BIRTHDAY JESS. and rock on our monarch!

22 Thoughts on The Ball