Woohoo. It is awesome as. 5 guys 10 gals. Having trouble remembering the girls names but I got all the guys on the first day.
The awkwardness didnt last as long as I thought. Actually we all pretty much clicked to begin with. Jeeze. I wish I could list all the in jokes which have already been spawned. Violent spoons for one. “That so nimrod” Has also picked up steam this morning because of some comments I made about the bible verse Genesis ch 10 vs 9. Im gonna try and make it popular again.
Russel took us for some hardcore study today. We have been put at the base of Glen Eden. Went for what must be our 5th walk to the top.

Sleep has been something I should be getting more of as well. Meh, Who cares. Only one other guy comes from Auckland (South). Others have come from as far afield as christchurch
Signs seem to be extremely scummy around here. even with all the posh as houses. Ha ha. We spied a waitangi day party from on top of the mount and decided to check it out. they had a brass band and a lot of suits. The police at the gates seemed to be rather serious about their job so we decided mixing and mingling wouldn’t work out to well. 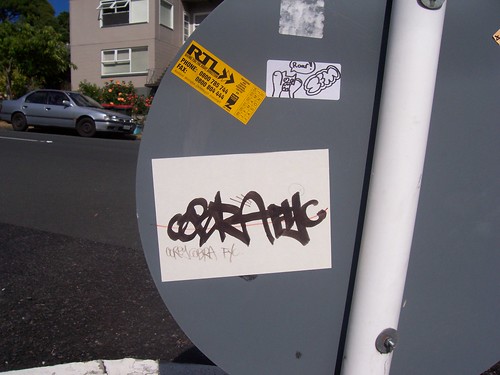 Frank and Mum are my favourite.. Ill make them fight to the death to see who is the ultimate favourite.
I have been instantly recognized as the Cartoonist in the team. My Study Notes Look more like spasticated graphic novels. I Never realized that noah got naked and cursed his kids. Interesting stuff. 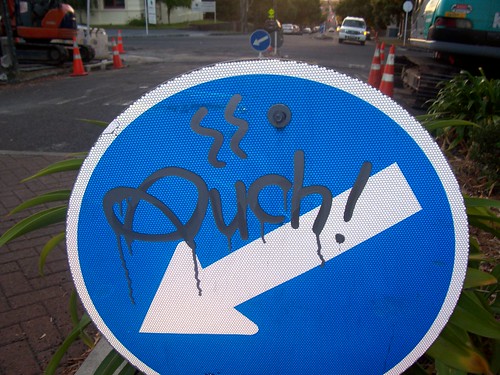 Woohoo!! An “Ouch” Tag!Ok, Everyones Lining up to have a go. Catch ya’ll later. (Or on sunday, cause were coming to make sure church is doing ok without me there.)