I have discovered that if you spend a little more time getting to know your area you also discover its shameful little secrets. Hendersons a nice polished place. All the new structures going up make the place feel all new. Not to mention whoever designed them seem to have a crazed fetish for glass and sharp angles. Walking around I have come across increasing amounts of homeless people. They never bother me and I never bother them.. I sorta wonder how graffiti artists and homeless get on since under bridges are where these two species like to dwell. Its not uncommon to find them by the railway lines (As I found out while walking to work once.)

(I found this pic a while ago)

But it is surprising when You realize theres one camping out in the middle of town under a bridge where you regularly walk to get your spoilt rich butt some sugar laiden beverages. 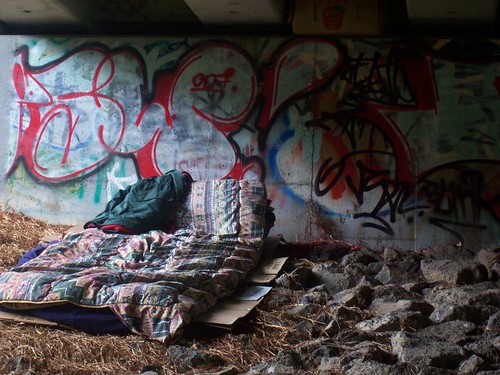 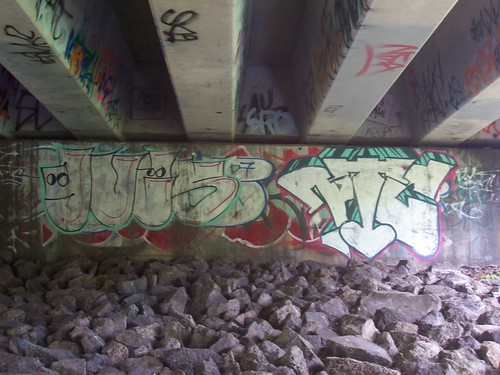 These two pictures are taken under the bridge in Henderson, betweem falls hotel and pakNsave.

Chalk is a fun way to participate in street art. For it Does no damage to anyones anything, and if it sucks it doesnt matter cause itl dissappear with the next rain. I got Matt to buy me a box of chalk for christmas and I have been putting it to some good use. Who says chalk is for little kids… Well everyone except me I guess. The “Make art not hate.” is sorta aimed at both onlookers and taggers. For the onlookers it would hopefully remind them of that 16-17 year old tagger who got killed about a week ago by a vigilante who caught him in the act. (Edit(2010): Bruce Emmary, the stabber, may or may not have not being doing it out of self defence.)
For the taggers, Do awesome art, that people will love to look at, like stuff Banksy does for instance, or some of the legal graff people do, like the one dedicated to Sir Edmund. 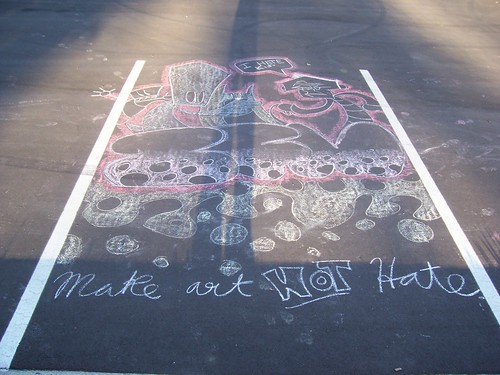 Is it just me or is this becoming a photo Blog. Oh well. =)