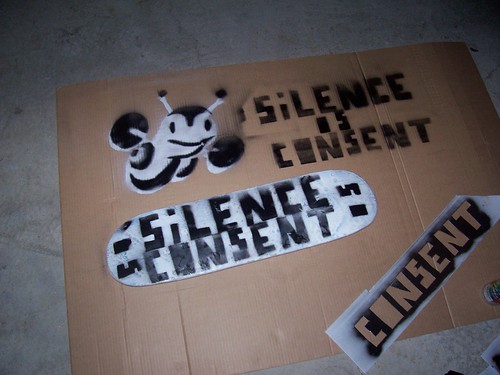 Woohoo. Another week gone. Peaky went to palmerston north after work so I had our little outdoor room all to myself last night. I took the opportunity to have a creativity blitz. I stayed up listening to a radio doco and Relient K while drawing and cutting out stencils. (Yes thats a skateboard with silence is consent written on it.) Also used the time to go nutz on the electric guitar and make up some new riffs. To keep me going through till 3 AM I went down to the caltex (About half an hours walk) to buy a 4 pack of V. On my walk I also got a bunch of flixs. Snort can be found around hastings. 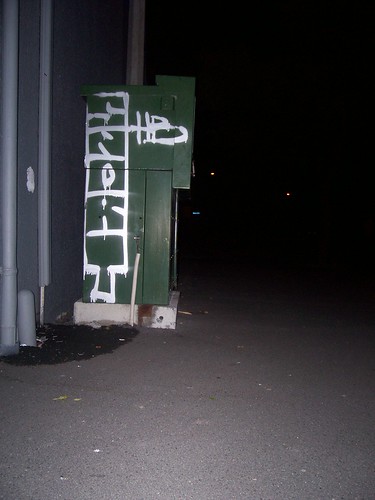 As well as Srene by Mc Donalds. 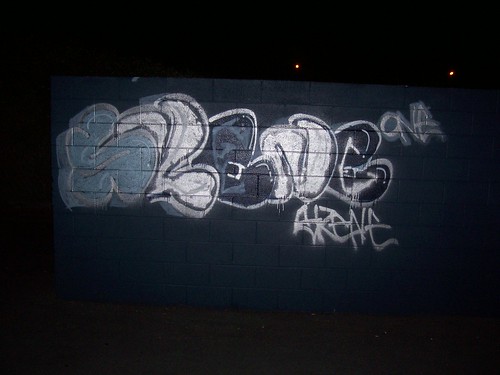 Also found this one, It was very moody.. 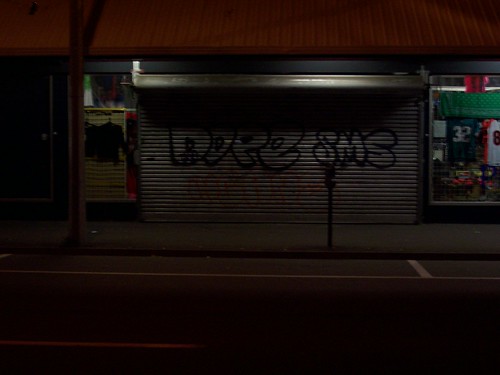 Ok, Enough with the graff. Funny story at work. I have been working on the grading line for the past three days. Im pretty much a permanent over there now. I’m also pretty sure I have done my neck in cause I cant turn left now. Or perhaps its this weird habit I have of waking up with my head off the end of the bed all the time. Anyway, All of us graders are standing round for something to happen yesterday. Were gathered around this tray of apples. On tray is acceptable apples and the others have circles drawn on the and stuff to show bruising and other blemishes that we dont want getting through. Nothings happening so I walk in into the middle of the group, pick up an apple with two circles drawn on it and say in an authoritarian voice “Ok, We can all see whats wrong with this fruit can’t we?” Everyone all sorts of mumbles yes for a bit then I say “Quite obviously someone has tried drawing a silly face on this apple-” Everyone cracks up laughing and this one old lady gets all grumpy and is like “No stop that be serious blah blah rar rar rar.” All the other old ladies or trying to stifel grins and laughter in an attempt to look mature about this. APPLES ARE NO LAUGHING MATTER. And you better remember that or they’l take more than our chairs next time.. The graders used to have chairs but a whole bunch of new brazilian people came to work there, and spent the entire time talking. The boss got grumpy and took the chairs away the next day. So now we stand in one place all day busting our backs. Funny thing is the brazilians havent been back since. Probably a good thing because these old ladies want to string them up.

0 Thoughts on Week two of work. OVER.