Week two of work. OVER.
Splash Planet. and everything else.
Uncategorised March 21, 2008
Share

Well our third of five weeks at work has just finished. Lets see. Since last time I posted I have seen 10,000 BC, and fat boy run. Both great movies. In order of awesomeness of movies this year I would have to put Fat boy run at first. With jumper a close second. 10,000BC coming third and a death at a funeral was just and discusting and no. It gave me a bad impression of british comedy, but fortunatly fat boy run revived my appreciation.
We have been working on paintings to sell to raise money for when we go to thailand. We’ll be selling them at riverbend church. Mine looks really illustrated. Man, some of the girls have done amazing stuff. Frank has done a verse from Dandelion, a song by five iron frenzy.

During the holidays during easter frank and zac have come to hang out with us. So now our family is boosted to eleven. Its nutty. Tonight we’ll probably get some movies out. Ha ha, today we went gaming for the first time in ages at the net cafes. Its my first real attempt at Counter strike. It was rather fun. But I sorta miss the days of battlefield 1942 ya know?
Last night we went for a walk down the train tracks and saw a nice amount of graff. We even found that sticker guy again. Man, Walking into town takes forever along the tracks. Not doing that again. Other artists we saw along the way were: seen, phat, turbo, chaos, blek, fuske, and sleek. Note that it isn’t Blek The french Stencil and graffiti artist. 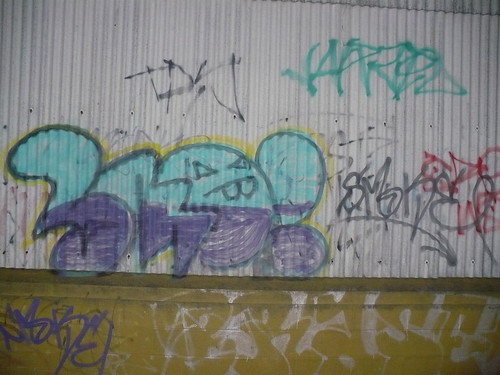 Well I guess its now off to the Video store for some good cinematic fun at home. Woop Woop. Oh yea, tomorrow we get to go to Splash planet. It seems to be the main attraction to hastings unless you haven’t seen a apple tree before.