Frank, Jared, peaky and me getting ready to eat tabasco.

Well it was rather a dissapointment really. Well the bumper boats were awesome when we went waiting in line. And smacking into Zac all the time on the Go Karts was amusing. Its just that the rides don’t seem to have the speed or excitement of Waiwera. Maybe I’m just getting old and patriotic or something. Also they don’t have any hot pools, apart from one pool which feels as though it is heated with the combined effort of all the small children peeing into it at once. I never realized how much I take hot pools for granted till now.
At one point I went to push Frank down the slide, His matt stayed where it was as he went shooting down. At another point Peaky tried going down the slide without a matt, it was rather pitiful watching him pushing himself down.
Last night we watched Jurrasic Park, me and zac stayed up talking and occasionally got freaked out by Frank and Peaky sleep talking. Our conversation summed up is “Blah blah blah WOA are you awake? he’s not awake, hahahaha. blah blah blah.”
Oh yea, the other day Frank sent in an irish joke to a radio station and won some gift cards to KFC, lol, so we got to use em today.
Jess gave me chocolate this morning! Yay, turns out I did get chocolate for easter after all! Our paintings are starting to be sold now at riverbend. It’l be interesting to see how they go. Emmily and Hahays are awesome as.
Classic conversation between me and the Caltex girl. I try to strike up a conversation. “Oh hi, wassup, its nice to see someone new.” “Oh I’m not new, I have worked here two months.” “Oh, ok, I usually come in here when the night shift are working.” “I am the night shift.” “Oh.. Well in that case.. Did you replace someone?” “Yea, Kelvin.” “Oh aight, was he the fat one all the tall one?” “the fat one about this high?” “Yea yea!” “That was my UNCLE, Hes working the day shift now.” “…. Thanks for the coke.”

This is monk and Smoke, two of the most prolific Taggers in Hastings 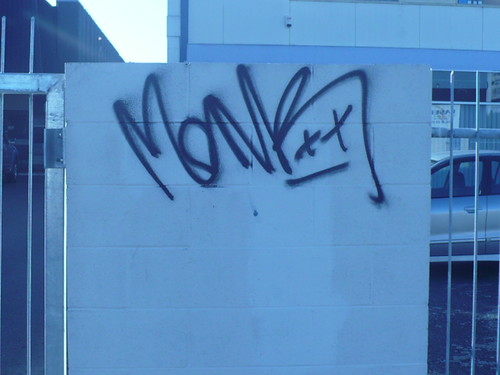 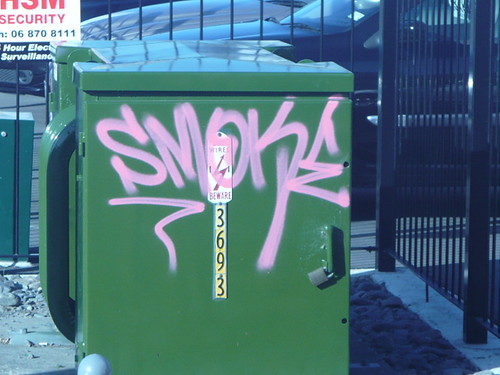 This is the road that my work is along. Amasing huh?

4 Thoughts on Splash Planet. and everything else.