I've tried returning the act of Thoughts & Prayers to it's rightful place of glory
Colin Craig's Poetry, According to a Poet
Gaming October 20, 2019
Share

After seven years of waiting, fans of memes, cartoony graphics, looting and shooting can indulge themselves once more. Borderlands 3 is here and  – spoiler alert – it’s worth the wait.

Unfortunately I never had the chance to play The Pre-Sequel and, since it’s not a Gearbox entry into the series, I won’t include it in this write-up.

So, B3. The long and short of it is that the third major Borderlands title is simply more Borderlands. If the first and second games couldn’t convince you, playing the third probably won’t push you over the edge. However, for those who do enjoy a bazillion guns more than is really necessary and a captivating storyline that can be enjoyed with or without friends, this is for you.

You probably already know the gist but here’s a synopsis of the game. You’re a Vault Hunter with a penchant for killing and looting and you team up with a variety of characters from previous games to take down the evil Calypso twins, Troy and Tyreen. The task will see you travel beyond Pandora to other planets for the first time, greatly expanding the narrative potential.

I’m still waiting on my friends to grab a copy so I can see how the game plays with multiple people but playing solo has its rewards too. You can take things at a slower pace and figure the nuances of the game out in your own time, helpful given the skills system has had a major rework. 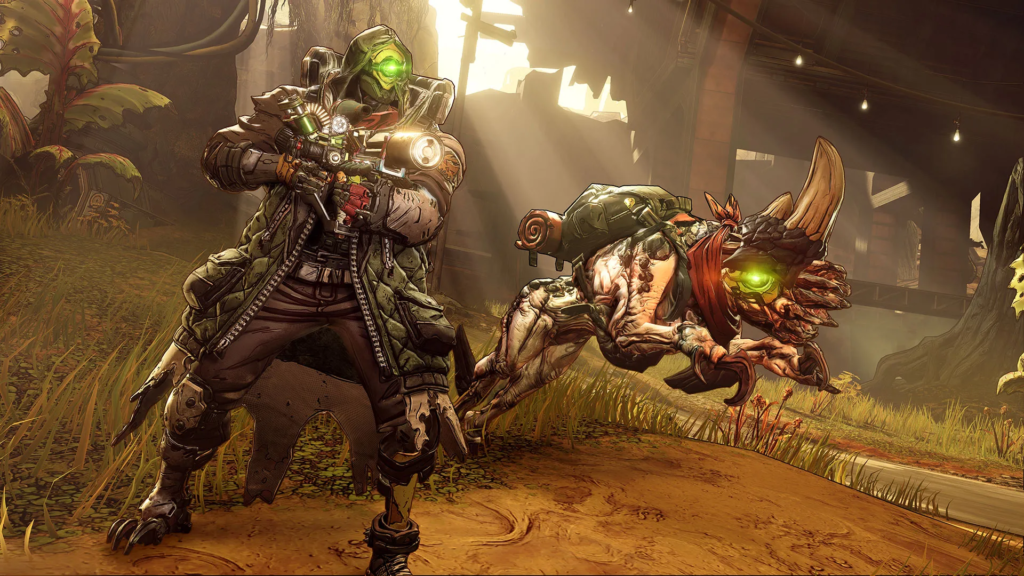 I played my first playthrough as the Siren, Amara, and she has three different variations of her main skill – a big ground slam, the ability to fire off an “astral projection of herself” that damages everything in its path or a giant fist that bursts from the ground and locks the targeted enemy in place for a few seconds. Each variant has its own tree which might look like a lot to work out but thankfully you can mix and match from each tree to find a combination that works for you. And of course, there are online builds you can follow to easily get the results you want.

It’s also refreshing to play a game that’s very inclusive but doesn’t make a massive deal about it. I won’t spoil anything but it’s nice to see inclusion not being done for inclusion’s sake.

Additionally, the end game options are great, which comes as a relief after sinking too many hours into Anthem. This comes in the form of Mayhem mode, which lets you finish off any side quests you might have initially missed with strong enemies and random modifiers that might help or hinder you. Three tiers of Mayhem offer better loot in exchange for more intense modifiers.

One criticism I will level at the game is that there are probably too many guns to choose from. I found myself constantly emptying my bag of weapons I thought were good to keep to fit another one in, meaning it took until very late in the game to find a set that I kept in my usual rotation. Even then, I knew that as soon as I found a Legendary with better stats, I’d throw my old guns at Marcus’ face, accept three dollars in exchange and moonwalk out of the shop coated in that sweet, sweet golden Legendary glow. Strangely, for one of the games (and the series’) main selling points, the guns tend to dilute the Borderlands experience. Although, to be fair, the shot of dopamine you get when a Legendary falls out of an enemy is highly addictive. Plus, the diversity in the weaponry is incredible. No fight will be the same when you throw a gun to regenerate another one and it bounces along the ground yelping “ow” or

Another negative is the Calypso twins as villains. Handsome Jack, from B2, was an ASSHOLE. He was so easy to hate, so quick to do horrible things just because he wanted to or it would help him get his way. It felt good blowing him to high hell. But the Calpyso twins just don’t quite get there. They’re based on current-day streamers, doing anything for views and reminding their legions of fans to “like, follow and obey”. They quickly and easily fade into background noise, the narrative becoming driven by a desire to find better loot and explore more worlds. Although killing them is still satisfying, it doesn’t have the same payoff as Handsome Jack did.

Ultimately, Borderlands 3 is a safe expansion to the series. The side missions get fairly repetitive after a while and the new worlds tend to feel like reskins of Pandora, a feeling not helped by the fact the same enemies appear everywhere. However, the core gameplay remains strong and despite the forgettable villains, the storyline is strong enough to keep you playing through, even if it is by simply wanting to know what happens next. Should you buy it, then? If you’re a Borderlands fan, I’d say so. But if you’re a Borderlands fan, you probably already have bought it. If you’re on the fence, get it with friends. That’s the best way to experience any game like this. And if you haven’t yet, play Borderlands 2 as well, a game I still recommend to people looking to try something new. It didn’t win Game of the Year for nothing.

22 Thoughts on Borderlands 3, More of the Same, And That’s just fine