King & Bonne Jenet - King of Fighters
Elisabeth, Hotaru, Kula - King of Fighters XIII
Uncategorised November 17, 2013
Share
So the Battlefield 4 Commander App for the iPad (& soon for Android, much to their ire. Just because you think you’re The Shit doesn’t mean you’l be treated with the precedence of The Shit.) came out on the 16th or something ridiculious. It’s not meant to come out till the 19th, so I don’t know what happened there. Either way it was good for me. I had a busy weekend of birthdays, BBQs, and helping my girlfriend and her new flat mates get moved in. So I had no chance at all to jump online and get my rank up.
Fortunatly though the app came out! So I managed to grind away a rank and a half at the beach and church. Ha ha.

You can’t play as the commander until you’re rank 10, even so this won’t prepare you enough for what you’re going to get dropped into. You’l understand the layouts of the maps which help with supply drops but the actual controls of Commander aren’t immediately apparent. Full size the guide to give yourself a quick run down. 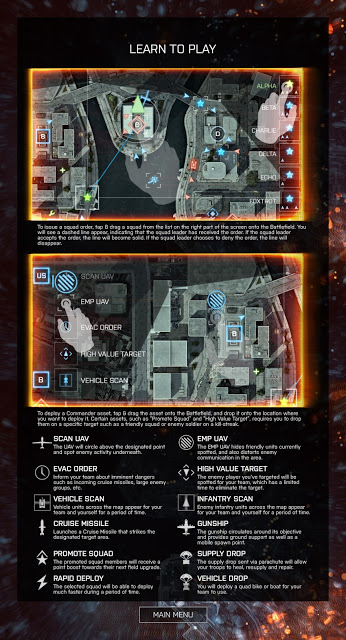 When you get into playing you can either just hit the “Play Commander” button which will drop you into a game or open the battlelog and hand pick the server you want to join. I found that just hitting “Play Commander” would annoyingly drop me into empty games, which I wasn’t down with, so I tend to go through Battlelog, which opens up like so: 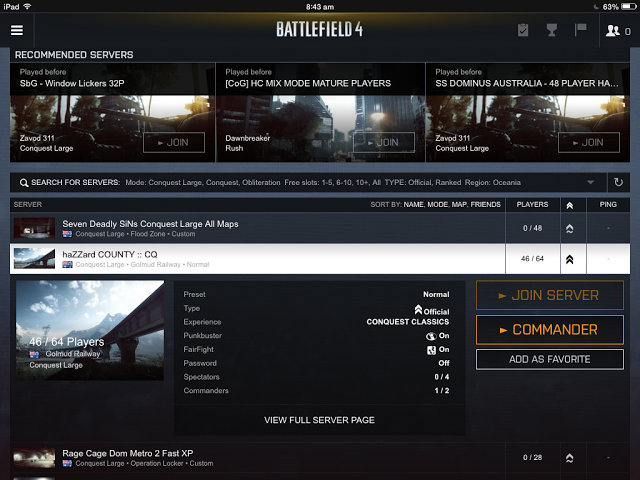 Then when you hit “command” it sends you back to the Commander app.

You can pan around and zoom in and out to help you get more control. I found that if I zoomed in I’d get to involved in the little drama of the triangles moving around, and they’d get undue attention from my UAV’s when the enemy would be completely destroying on of the other control points.
You can’t see it in this screenshot but the top left area is the chat box and the top right is the kill announcement thingy.
The greatest unused feature is the bottom right, where you can VOIP straight to your squads. You can’t use the regular chatbox so this is your main way of talking to your troops. I suspect it’s main use will be for telling oblivious squad leaders how to accept Commander commands.
If you don’t know, hold Q to bring up your com-rose thing, and at the top should be “accept order” you’l get way more points for doing things and your commander won’t feel like he’s just spectating a game of Geometry Wars.

The endgame menus are exactly what you would expect from the PC version.
My only concerns with the Commander Mode (which is mostly due to lack of experience) is who can hear me when I use VOIP. Is it just the selected Squad Leader? The whole squad? The whole team? I’m sure I have more concerns, but that one will do for now.
Oh also I wanna know if I can be a commander on XBONE servers even though I have a PC account. That’d be nice, I would really dig playing with my less refined friends.