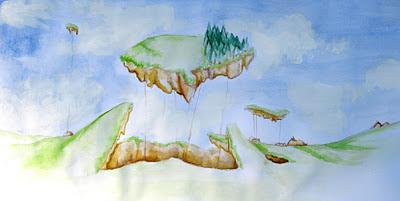 Here’s the first bit of art penciled by me and painted by Becky. I’ll get a better version of it up as soon as I get it inside a scanner. You may recognize this location actually.
Blobbies mark time based on when their city was first settled. Before then they lead a carefree life of following the wandering heards of squox. The current year is y502. their 500th year is marked from our 2010. Yes that’s right, they went from wandering hunters to urbanites in 500 years. They are what I like to think of as being in a pre-babylonian state. They all speak the same language, work together well, and above all don’t war among themselves. This united collaborative society was able to create inventions in leaps and bounds, hindered only by passing monsters and Skullies. There is only one known Blobby city and hardly any Blobbys live outside of it.
Months don’t exist in the way we think of them. Rather seasons have a descriptor tacked on the end, splitting it into three distinct parts. Summerwax, Summer, Summerwane, using that pattern with all the seasons.
Weapons are limited only to the army and may not be purchased by civilians. Why would they want them? Although obsolete weaponry is readily available to any interested blobby, because lets face it, bows are fun.
No deities exist either, or at least are worshiped by Blobbies. There are plenty of “god like” beings inhabiting the world, but none of them have expressed any interest in being worshiped by the Blobbies.
Cynics may point out that this lack of worship is a main contribution to the Blobbies unwarlike behaviour, but it should be noted that the sorts of people that would point this out also don’t exist in the Blobby world.

Thanks for listening to my late night note taking. I don’t think I would have been able to sleep if I had held onto all this stuff in my head that’s been rattling around. I’m hoping that I’ll be able to conduct my first proper test of the game in a week! So I better hurry up and get the back-end monster stuff finished.