When I was a Teen
Dinosaur Will Get Her
Uncategorised May 17, 2011
Share 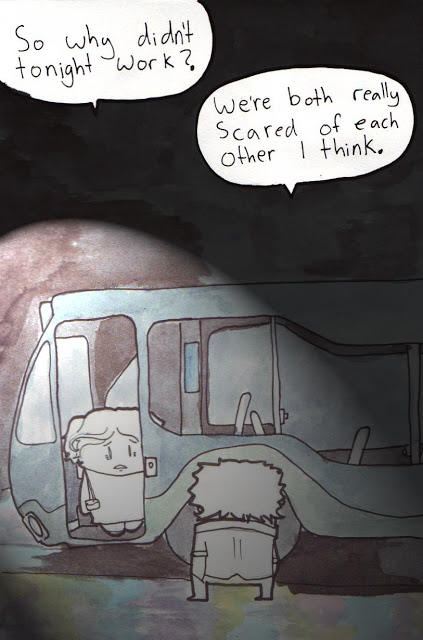 Maybe its because you fall in love with the idea of someone sometimes, rather than the person themselves. Maybe it can happen to both people at the same time, and when they finally get the nerve to go out it all goes horribly. Conversations feel contrived and hardly get past the “So whats your favourite movie” stages.
Man it seems to be all about talking. And if you don’t have fun talking to each other then why bother trying to force it to work?
This post is for all those ill fated dates that never worked out… I hope the little blobby couple will be ok. They’l be ok. Their world is one big massive safe neighbourhood. (Except for Dinosaurs of course. No amount of neighborhood watching will stop shit like that.)

Ok, Lets cut the chase and get to the meat and bones of what I’m after. Advertising trends in a changing time. I don’t need to explain this I think. It’s fairly straightforward. But I would propose that the vast majority (Aka everyone who’s getting on with their life instead of doing media) hasn’t noticed (or just taken for granted) the ways advertising is done now. We all know it’s getting everywhere. Advertising is the bane of our existence (And as such I don’t allow google ads anywhere near this blog). At the moment advertisers are piling onto the facebook/twitter bandwagon. I’m not sure why I would want to be “friends” with Coke, but I’m sure there is some sort of benefit to be had. Twitter has opened up a public avenue for conversation between the consumer and the advertiser. That is of course, if there is someone around on the advertisers behalf to talk to haters… Advertisers are making these shifts to constantly be in your eyeballs, on your level (Like a buddy) and on your mind when your no where near them.
They have realized that while google ads are all well and good, people have built filters in their heads to ignore them. We see them as ugly bits of static on the screen. So they change their tactics a little and all of a sudden they have the spotlight again (Plus prime real estate on someones blog about this subject.) For Example:

0 Thoughts on We’re Both Scared