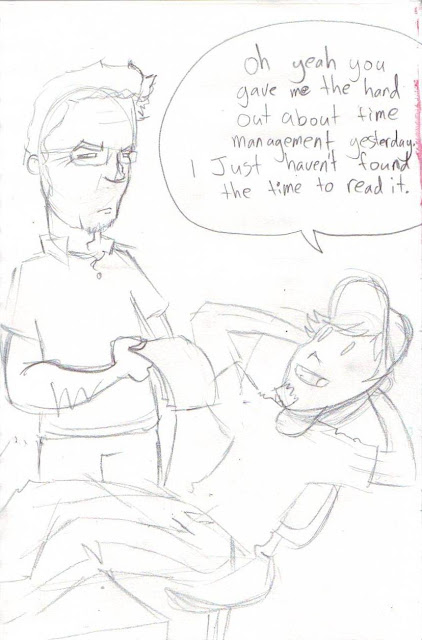 What this and my last post is illustrating, children, is how to get a stunted mark from your lecturers. Eric is pretty rad though, although I’m still getting used to his demeanor. I got flustered and gave a bogus presentation today due to it (That and my confusion with grid systems. I so desperately wanted to say it was built on five columns not on the apparent two.)

For the first time since 2002 I’m making a concerted effort to play Pokemon again. Not the best time to start, I realize that. Especially since I just drew a comic about time management. I got Pokemon White. Started with my fire type pig thing. Seriously, its hard to talk about any of the critters since I don’t know their names. Talking to Becky and Harry about it, I sound like i’m bringning normal animals into servitude. “Oh yeah, I caught the cat one along with the beaver thing.”
They speeded up the starting process at the begining. You wake up, get your pokemon in your own room, fight in your room, trash the shit out of it, and then gap it, letting your mum deal with your mess. Nice way to start your adventure to adulthood, dick.
Team rocket or whatever the “Team” was last time has got a new makeover. They believe pokemon shouldn’t be caught and fought with. Which is fair enough, if the only mode of conflict wasn’t FIGHTING WITH THEIR POKEMON. I wouldn’t have minded if it was human vs. Pokemon. That would have been fun. Instead of hiffing a pokeball they just walk out and take turns pummeling your pokemon “For the greater good.”