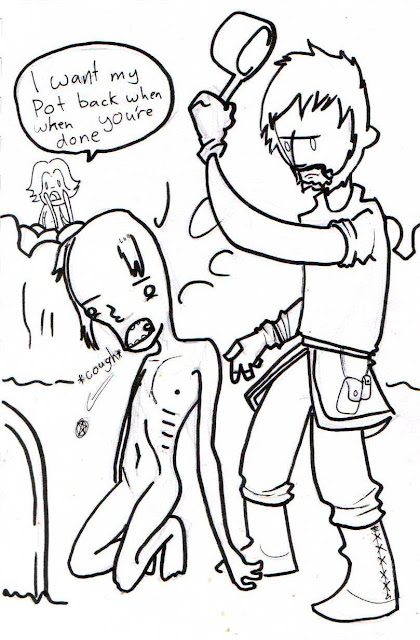 Just an illustration from Becky’s first D&D experience. She picked it up pretty good. I’m extremely proud. I also got to try out my first homemade mission. It worked out marvelously. I’m considering putting the notes for it online, but it might kill the suspension of belief for my nosey players.
Being her first adventure (And using the Red Box as the jumping off point) I set the story in the southern corner of Fallcrest in the outer rural area. Figgens, a woodsmen, was attempting to bring his wife back to life, but in the process creating zombies as experimental failures. This came to a head when Ann Sprocket, a farmers widow came running into town babbling about her husband wandering around on their property. This drew the attention of a halfling called Greek. She managed to track down the culprit by questioning the local Healer, Ronin. A nice chap, even if he’s blasé enough to go handing around resurrection theories.
She displayed her cunning skills as a thief by breaking into Figgens house and finding evidence of his sacrilegious activities.
She then made it back to town, dripping a little from axe wounds, to tell Ronin how to reverse the effects of the animated corpse. They managed to win the day using a pot she stole from Figgens house.
She then finished the day by cooking up some food with the previously mentioned pot… Which is a little
disgusting considering it was used to bludgeon a corpse. Ah well.
You can see an illustration of her breaking out of Figgens place over at her blog.