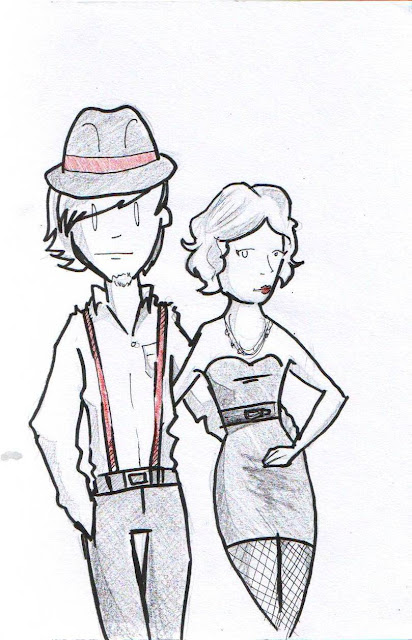 We drew ourselves, I inked us, Becky coloured us.
This was another one of those rushed doodles. We just drew us as we were.
The theme of the party we were going to was Gangsters. It was assumed that we were meant to be in fact “Gangsta” since there was mention of bling. The older people dressed up in leathers and managed to pull off bogan pretty good. They probably think hip hop is an abbreviated term for Hip Operation.
Becky decided we should go as the more slick dressed type of gangsters..
I had an interesting encounter with a person I cannot remember the name of. So I will refer to them as Mr. Man from henceforth.
Mr. Man wanted me drunk. Since apparently thats a thing these days. He kept thrusting beers at me, which I politely drank, but since this process was much to slow for his liking he tried speeding things up with various challenges and shots, most of which I refused. He kept asking Becky to “let him off his leash” and that I was whipped.
I don’t think he understood that someone would want to remain sober of their own accord. And once again a case of bro-rape is averted.