Well Hanna beat me at going and telling the internet about us totally rocking out in RL. I was going to copy paste but she demanded I write my own account of events. So fine. Here I go.
The planning for this started shortly after (Or during) our Taupo excursion when Matt ‘n Keir realized that Hanna wasn’t one of my nut job friends. Which is always a relief when you have to share rooms and spend a couple days with someone you don’t really know.
Our trip was originally scheduled in the opposite direction and half the distance from where we ended up. But it was a couple weeks ago when I was freaking out about getting my Pepsi junk in on time.
Anyway, we did our usual ritual before going on any sort of trip. Me and Matt messed about playing guitar and junk until it was time to leave to grab Keir from work. That’s also about the time He decided to pack for it.
It was a pretty uneventful trip apart from the random stone cracking the window on the drivers side. Oh yeah. And we had to stop in the middle of nowhere so I could take a leak. I have what’s called a “womans bladder” in the business.
We got to Hannas, which is situated in Okaihau. Cute place.
We all ended up sleeping in Hanna’s room. But after I ran out of stuffed animals to hiff at Matt, attempting to cure his stertorous, I had to retreat to the living room to sleep. I woke up later and found Hanna on one of the other sofas asleep as well.
We woke on Saturday, ready and refreshed to take on everything that had to be done on our brief stay. We drove to The Waihoanga gorge walk. Hanna insisted it was a public place. But by the amount of electric fences we had to jump, guard cows we had to evade, and strafing from Magpies we got, I was seriously in doubt about her statement. it was a cool waterfall, but not as cool as Rainbow Falls we saw later on in the day.
After doing the walk we decided to try an alternate route back, to try and avoid the various hazards which we had encountered on the way there. Unfortunatly we got stuck in another field with an even harder electric fence to thwart. Even the tree stump we tried using to jump the fence was electrified, as Hanna found out.

We eventually made it to the car and set off for some forest pools, I think they were called. It’s this secluded bit of stream, with a cliff face up one side and a pebble shore, made of grit and river stones.
The girls took a swim there, floating down on the rapids, while me and Matt honed our hunting skills by throwing rocks at thrown rocks. 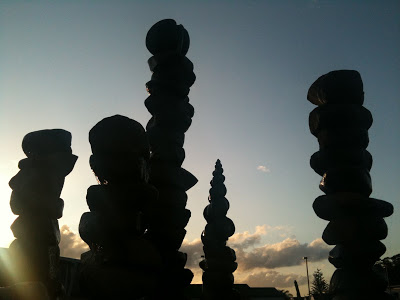 Deciding to have a change from natural beauty we went into town and had dinner. Afterwards we went to these natural hot springs. Well, we didn’t really get to try them, since as we got out of the car I realized I left my beloved bag in Mc D’s. So it was a worried half hour drive back into town until I was reunited with my bag. If you know me, then you realize that the implications of loosing my bag is a big deal. That ratty old thing has been with me longer than my hat.
We got home and everyone seemed about ready to crash into sleep. We waved goodbye to Hanna, and set off into the night, for a four hour drive home.

The sun had crested on the green rolling hills to be replaced by the White Lady, her face aflush by the radiance of the day bringer. We raced beside her as we forged our way to our destination… We forged way faster than the stupid moon can. 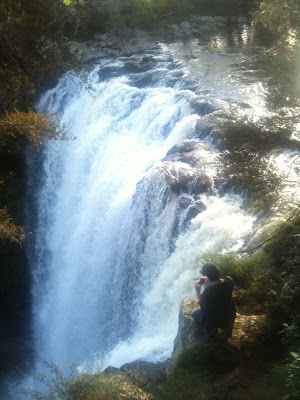 I really wanted to get a photo of my knee near a waterfall.