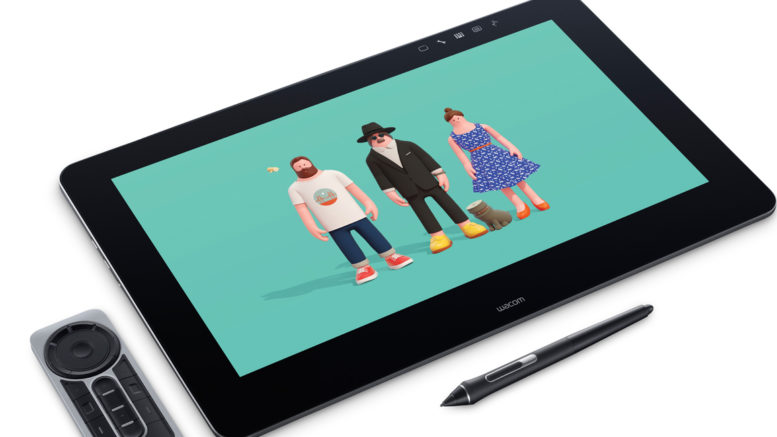 The Cintiq name is one that’s always bandied around creative circles with a certain amount of jealousy. If there’s one thing that creatives covet it’s top shelf tech from Wacom. Until now my wife and I have gotten by on a entry level Bamboo Pen & Touch and a nice Intuos Pro. With these sorts of tablets you can get by just fine, but there’s always an initial culture-shock when your drawing is disconnected from where your pen is. You draw on the table and watch your strokes in front of you on your screen.

So it was with much excitement that we were able to get our hands on the Cintiq Pro 16″. There’s a smaller 13″ model but we went straight to the top. It’s the first 4k screen we have in the house, able to pump out Ultra HD (3840 x 2160) at 60hz. Drawing straight onto the the anti-glare, etched-glass surface is like drawing right onto paper. The friction is just right. It really does feel like a premium drawing experience.

The big test is always the pen lag for me. Having the cursor falling behind your quick strokes can make or break the feeling of drawing digitally. The Cintiq holds up just fine in this regard and the product does as much as it can to stay out of the way and let me draw.

Across the top right of the screen is a row of touch buttons that control finger touch, onscreen keyboard, tablet mode (in case you’re sick of looking at your work in brilliant 4k) and various other handy modes for diagnostics. Apart from a power button on the top these are about the only buttons you’ll find on the Cintiq. There are no hotkeys running down the side, so if you have a setup where you can’t reach your keyboard you can get an expresskey remote. Built into the software for the Cintiq however is a radial menu that you can drop anywhere onscreen as a quick way to save, undo, etc. I ended up using a hybrid of keyboard and radial menu.

Macbook users will have a great time with setting it up as it takes USB-C for video and data. PC users may have a slightly harder time if they don’t have any USB-C slots in their machine. Wacom thought of this though and provides a Link adaptor which splits the USB-C into a regular USB and a mini DisplayPort. I was out of luck here as well and had to get a Mini DisplayPort to DisplayPort cable to get up and running. Official word from Wacom is that this method will only allow your resolution to reach 1440p, a resolution which is still totally fine to work with, but smart people out there have pointed out if you make sure your Mini DisplayPort to DisplayPort cable is rated for 4k you should have no problem getting 4k at a 60hz refresh rate. You paid for it so you may as well get the most K’s out of your Cintiq as possible.

I’m not going to lie though, it was a real bitch of a thing to set up at first. Touch sensitivity wasn’t running at first and I was rummaging with cables for ages. I think legacy drivers from my last tablet were hanging around fucking the whole thing up. After I cleaned all those out, and had all my other monitors unplugged it started working. I’m pretty sure the Wacom doesn’t enjoy having to share the graphics card with two other monitors either (although I’ve seen them working for other people).

Becky also has occasional issues where the tablet will turn itself on and off randomly (maybe a lose connection or accidentally tapping on of the hotkeys at the top of the tablet). This totally breaks the flow because the drivers don’t always kick back in, meaning we need to restart the drivers and close down photoshop to bring back pressure sensitivity. This is perhaps our biggest issue with it at the moment, apart from having a hard time getting at our keyboard, which is wedged inbetween the screen and the tablet.

Becky is drawing right now! Drop in, hang out, have a laugh maybe! The #puns are strong in this comic https://t.co/0CnRUSj1pD pic.twitter.com/FW67bLahyg

The size isn’t quite 16″ at 15.6″ or 39.6cm for regular people. This doesn’t make for as snappy a name though, and the surface area is more than enough to lean on and do long liberal strokes.

The back of the Cintiq are two feet that flip out to prop it up. They’re super rigid and the first time you use them you might feel like you might snap them off by accident when you’re clicking them into position. They’re sturdy though so don’t fret.

Finally it comes with a Wacom Pro Pen 2, which is 4 times more pressure sensitive than its predecessor. It works without a battery and has natural tilt support. It has everything you’d expect, rubber on one end, nib on the other, the two buttons on the side, and of course a ring near the nib you can swap out with one of the other provided colour rings.

If you’re thinking of making the jump into drawing digitally you’ll find the Cintiq will ease the process. Even moving from a regular tablet to a touchscreen I found the amount of undos I had to do decreased. I usually try and do long unbroken lines with quick slashes to make the line work look as smooth as possible. This style got a lot easier to achieve now that I was looking directly at what I was doing. There is no disconnection between you and the computer, you can draw like normal.

Its the digital drawing version of eating really good Russian fudge; melt in your mouth good.

17 Thoughts on Using the Cintiq Pro 16 to Make Comics