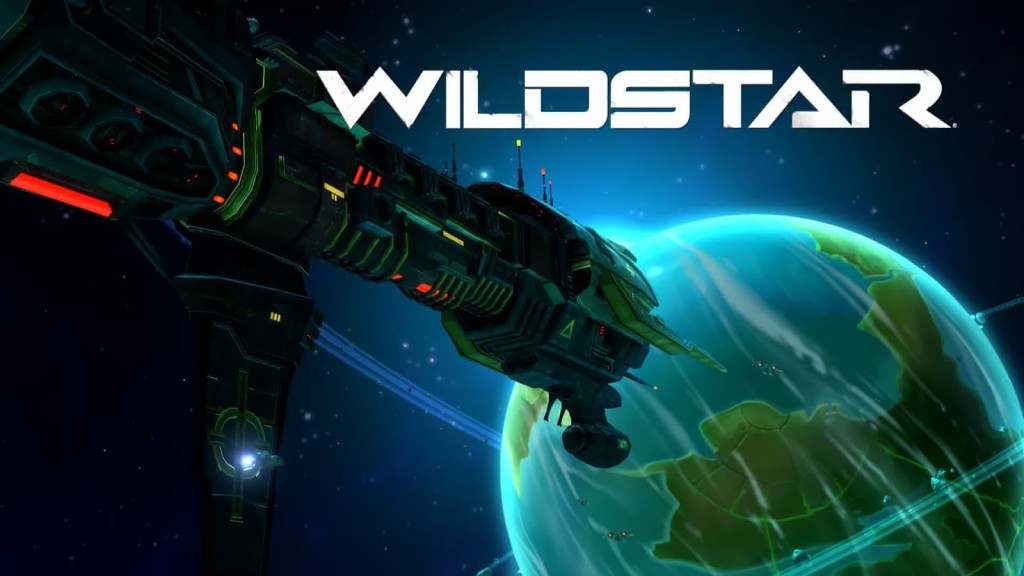 Much like my “The Forest”  review I’ll be doing it blow by blow until my first death. I’ve been hearing good things about this game from pretty much every corner of the internet, so when +Borne Mace was awesome enough to send me a Guest pass to give it a whirl then I leaped at the chance.
Getting the game running was a bitch. Apparently everyone in New Zealand (& Kuwait) are having an issue which goes along the lines of “ERROR: MESSAGE DEFINITIONS MISMATCH – CONNECTION CLOSED BY REMOTE HOST” when you try and log in.
I had to get Hotspot Shield and run through a VPN. Run the game from the launcher and it’l download a patch. Once that’s installed you can switch off the VPN and get playing like normal. I found that when I opened it again it redownloaded the buggy local patch and put me back to square one, having to repeat the process to fix it again, downloading another patch.
This really tainted my experience from the get go. If your a NZ player, I recommend maybe holding off for a while till they deal with this pain in the butt.

Ok First up is the character creator. Instantly I’m reminded of Jack & Daxter and all those old PS2 games. If they didn’t stylise it so strongly then I could see it falling into the Warcraft realm of cartooniness. There are a decent number of characters to choose from. They fall into two factions fighting over Nexus, the planet everyone is scrapping over. 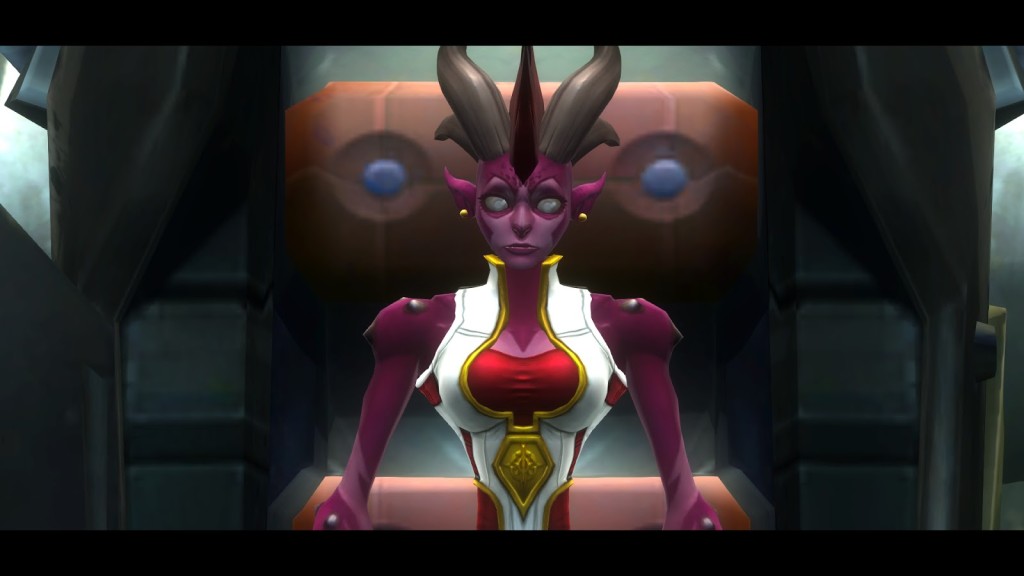 I eventually picked this demon chick thing who’s on the bad guys side. I figure if I ever do a pixelated version of her I’d never need to over emphasis the curves, because that’s already been predone for me. You can muck around with the face quite a bit. Not on the level of APB Reloaded, but pretty close to Skyrim standards of face editing. Unfortunately you can’t make their faces concave. 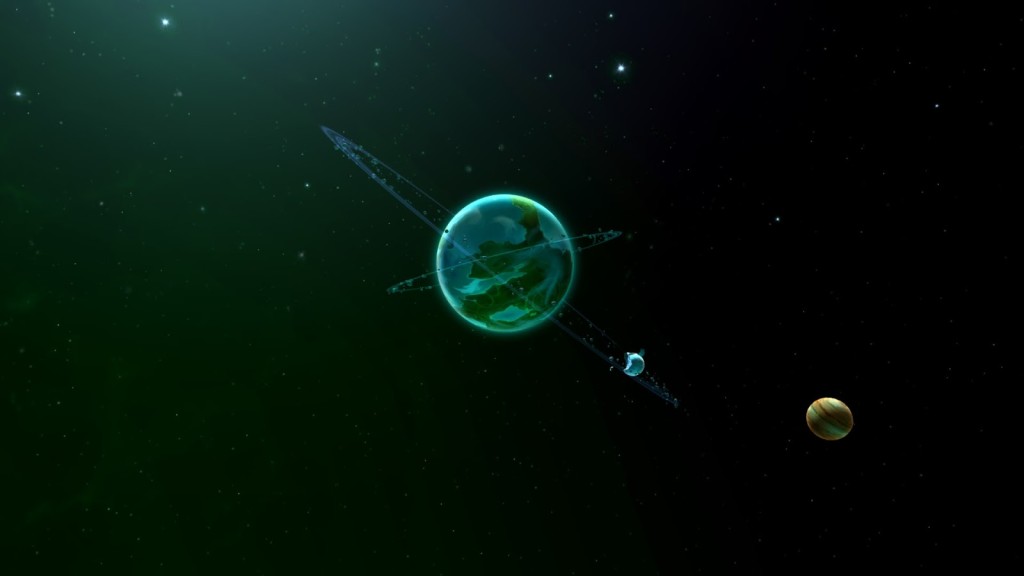 After completing character gen you get chucked at a pre-rendered intro which basically tells you you’re working for “The Man”. I’m gonna take this opportunity to say that the music is rad. I really enjoyed it. I’m not sure what it would be like after 200 hours of play, but at least the initial impression is great. 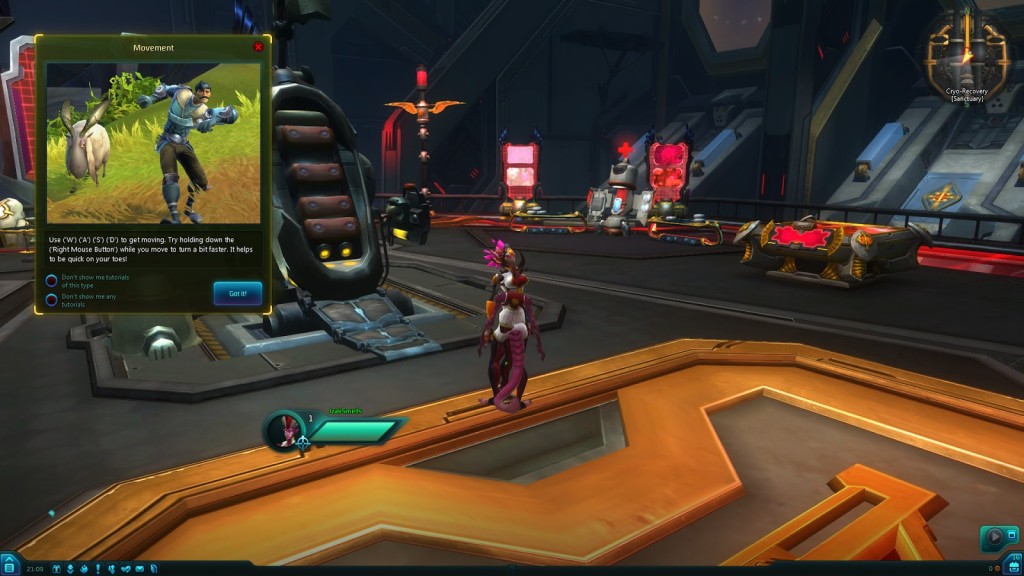 Then the game spawns you inside of someone else who hasn’t moved yet. I was instantly freaked out by all the menus and HUD elements. Although looking at the screenshot above it seems pretty bare. It really isn’t. Speech bubbles, chat windows, quest logs and everything else a seasoned MMO player has come slowly encroach on the real estate, driving out any sense of control a noob might have. 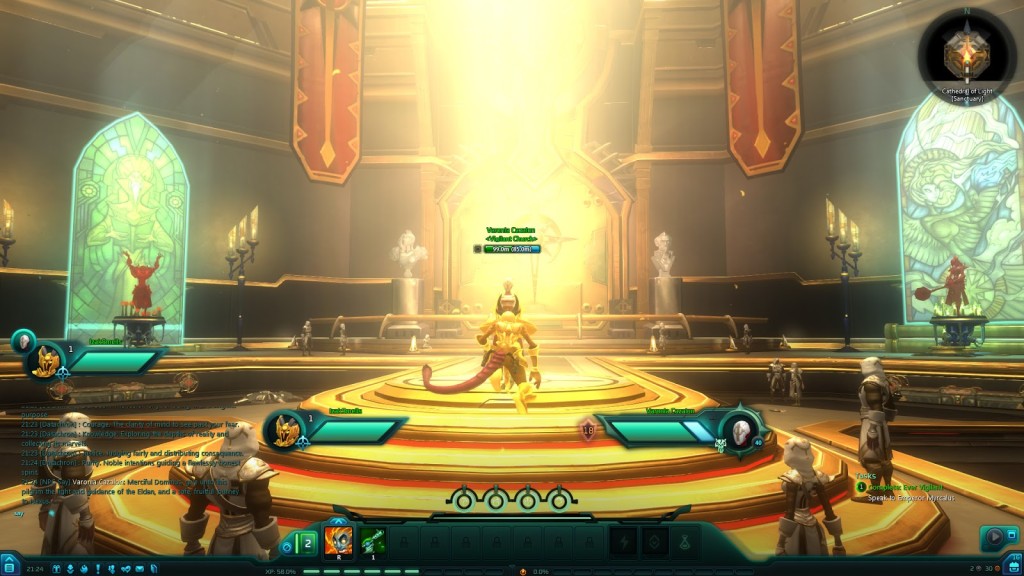 At first I attempted to read everything that was charging it’s way across my screen, but the fact that the voice clips of the NPCs didn’t match what they actually said kind of threw me, and no interesting story details made their way into my brain. So eventually I just said “Yep” to whatever was said at me and everything started to chug along quite nicely. Fortunatly you don’t actually need to listen to anyone. The bottom left displays quest info and if you click on it, it points you in the right direction. 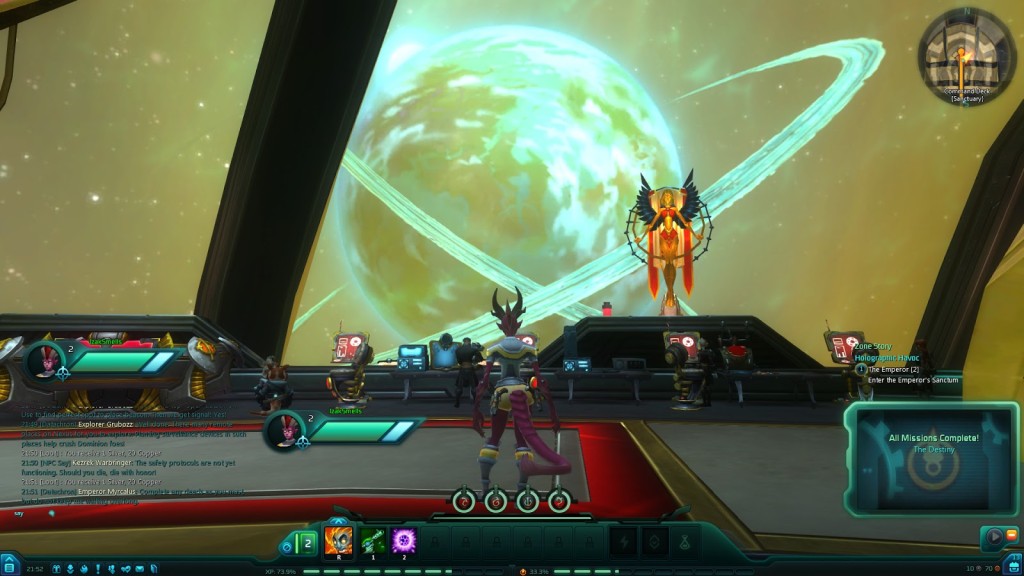 The spaceship acts as Noob Island, so when you’re done it shoots you off onto the planet to go do what’s gotta be done. Along the way it introduced me to my Explorer Path, something I chose back during character gen. This appears to be some sort of specific storyline or set of tasks that are tied to this one path. Pretty much it makes me do little jump quests and cave delves to set up science equipment. It’s pretty cool, and I enjoyed the quests it threw at me when I randomly triggered them. 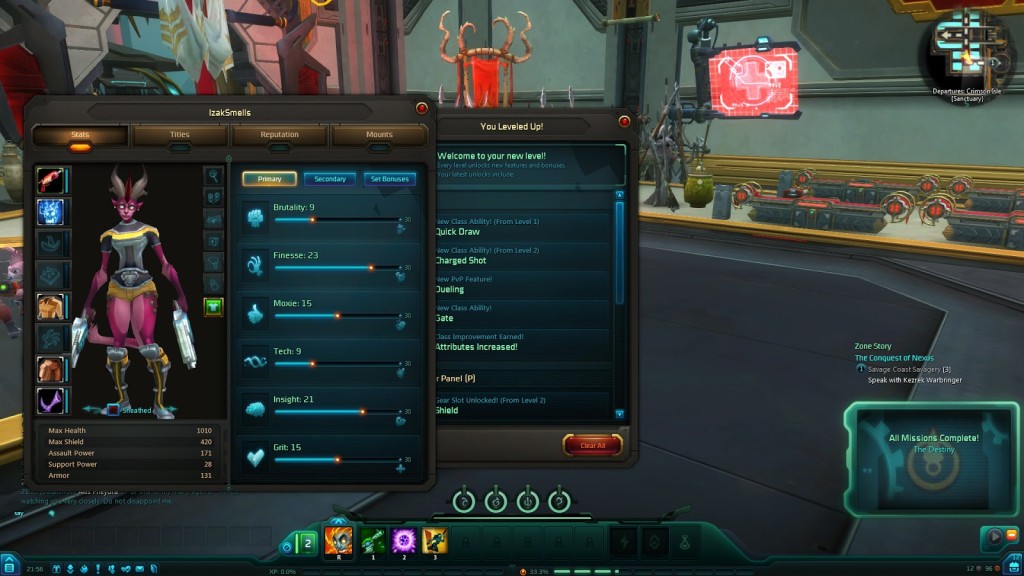 I didn’t pay that much attention to all these types of menus, only going in them when I was prompted. I didn’t have to do much inventory dicking around which was nice. The amount of random shit I collected was very minimal, through no fault of my own. 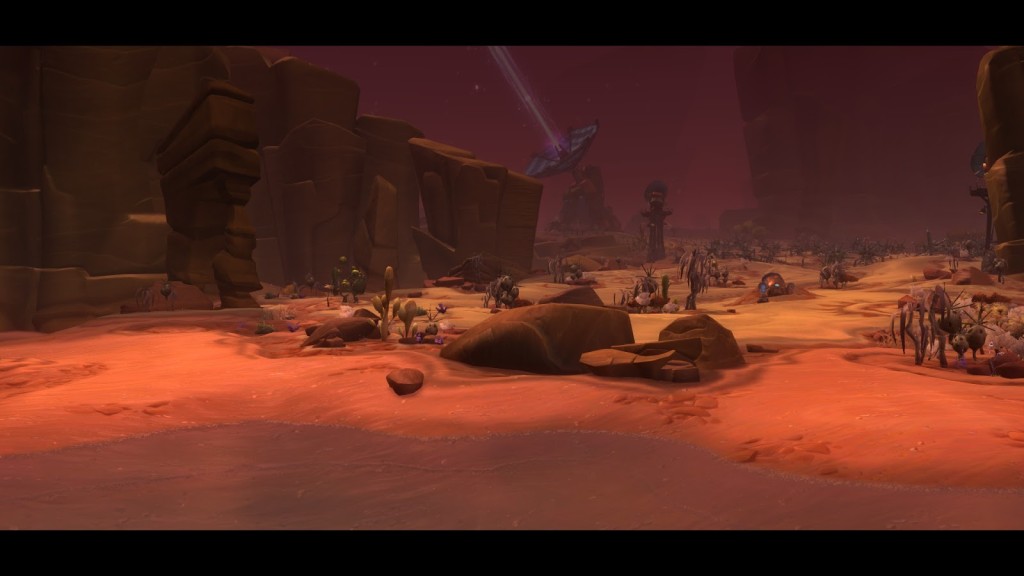 It then shot me off onto this barren part of the planet where I was a part of some sort of offensive. I was pretty pleased with everything going on in the environment. There was sharp grass you can’t touch, landmines to lure your enemies over (or to blunder over yourself) and random effect fields, that when you walked over would trigger a slow mortar on the location (fired by the enemy somewhere). I assume it’d be great for luring enemies into as well, but I never bothered testing the theory.
With combat I felt like I had a lot of options available to me. You have to aim at things and dodge around, none of this WoW “click to automatically wale on ’em” mechanics. 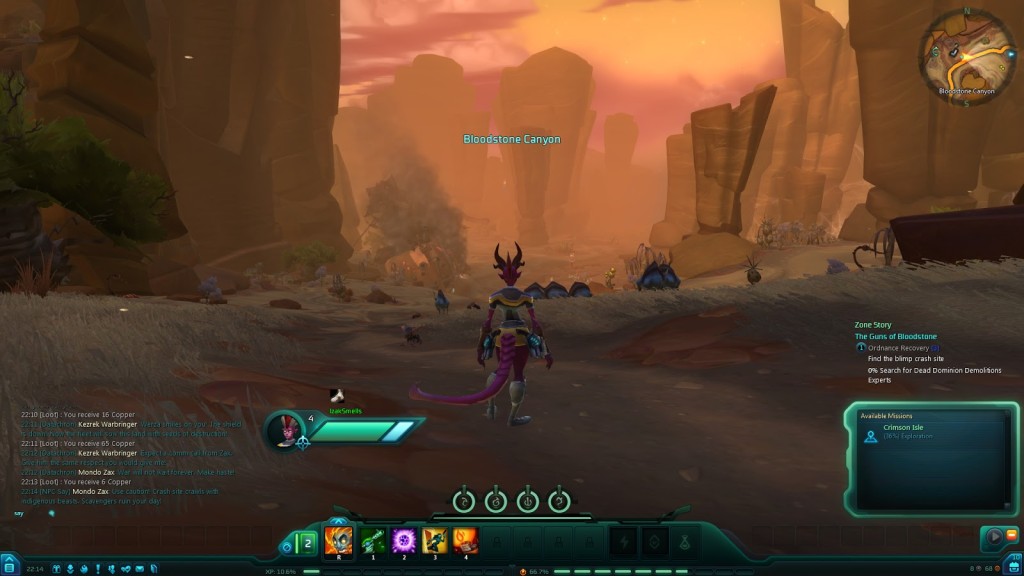 The quests led me along quite well and I always had something to do, none of which felt like I was collecting wolf hearts or whatever you do in MMO’s. I have stuck away from MMO’s for years and years, finding them a waste of time and all cookie cutter unoriginal, with nothing new to offer me. But I wouldn’t scoff if a friend told me they were playing Wildstar. There’s always something to do and it doesn’t feel dumb (in my 2 hours or so of play.) I even killed a random mob and somehow triggered a GTA style “Kill a heap of these as quick as ya can! Go on!”
Although I don’t like the idea of paying a subscription for the privilege, especially when the base game is 60 bucks. Like holy shit. Although they do give you the option if you’re a hardout player to be able to buy more gametime with the ingame gold, which is pretty rad of them. 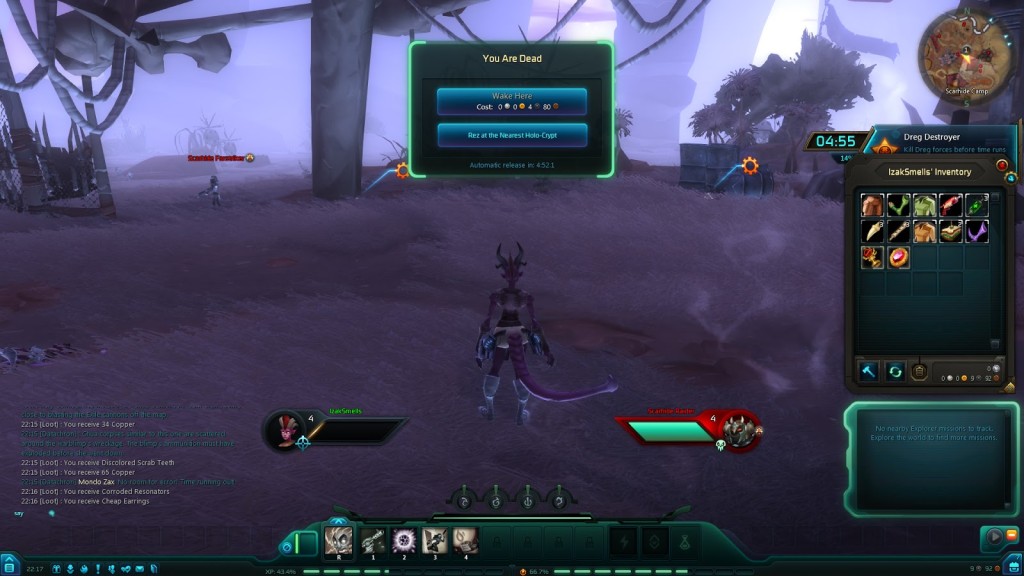 And this is where I died. You can either spend gold to regen right where you are, or spawn back at a camp like a cheap bastard. I went with the latter option. I never made it to any sort of big city with merchants and stuff, so I don’t know how crazy that sort of thing is.
Personally I recommend Battlefield 4.