Steam Summer Sale: The Swapper
The Dodgy Lady Incident
Uncategorised August 6, 2013
Share
After a recommendation from work, and previous experience with Shadow Of Chernobyl I decided to get the next game in the S.T.A.L.K.E.R. series, Call of Pripyat. A prequel to the original game which really pushed free roaming FPS games. The engine is a bit clunky, and reminds me of how Morrowind would feel if it was remade right now without any watering down for the consoles. Pripyat is very much a PC game.
Shadow of Chernobyl took a slightly more linear approach to its level design, while Pripyat instantly throws you into the wandering.
It was vaguely terrifying starting in the swamp land, considering I had previous experience with what this world had to throw at me. 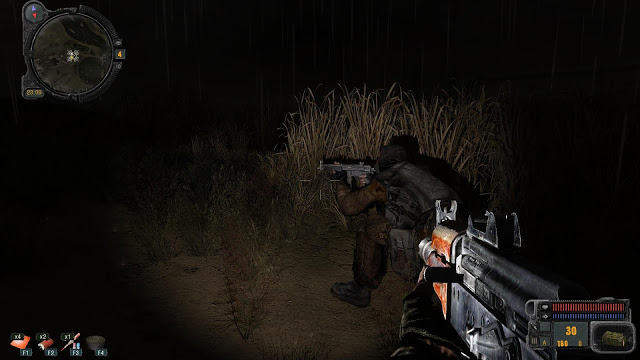 My first mission I took was with these dudes that wanted to raid an old rusted ship lying in the marsh. Unfortunatly I wasn’t familiar with the inventory system, so when I went to loot the body of the first person we downed I accidentally put all my inventory onto him, thinking his inventory was mine. 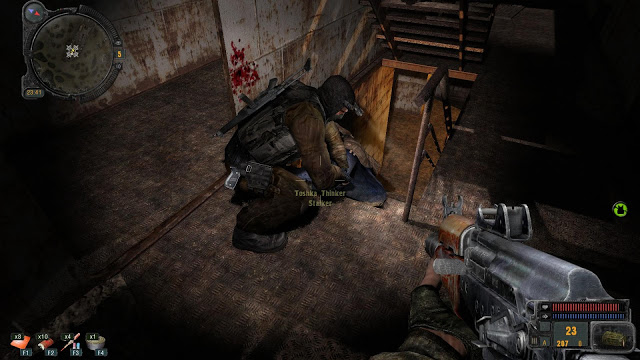 This wouldn’t be so bad if the guy pictured above didn’t have the same idea and raid the body as well. So an NPC took all my stuff. What a dick. So I reloaded. There was no way I was going to start the game off with no food or ammo. 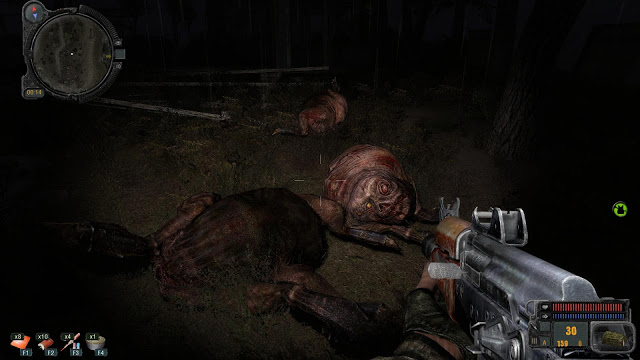 My first encounter with the local wildlife went pretty good I think, bumbling around in the dark and I just happened across them. 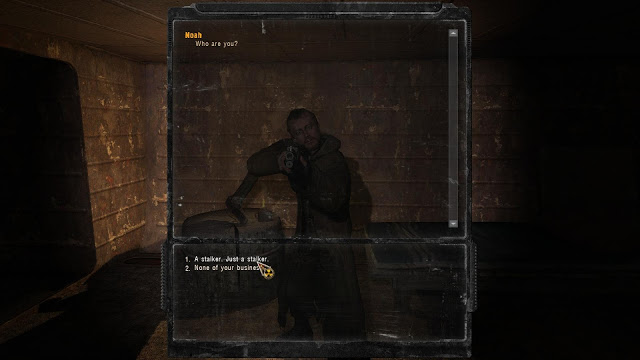 The game isn’t afraid to throw punches at you. It really doesn’t care. I got directed to this NPC who could help me on my Downed Chopper Investigation (My main quest and point for being in the Zone, the radiated center area of Chernobyl). Everyone I talked to said he was crazy, but I was still surprised when he shot at me when I opened the door to has rust house. I almost blew him away, and it was only some weird restraint that stopped me from doing that. I’m not sure if I can kill NPC’s. But it definitely feels like a possibility. 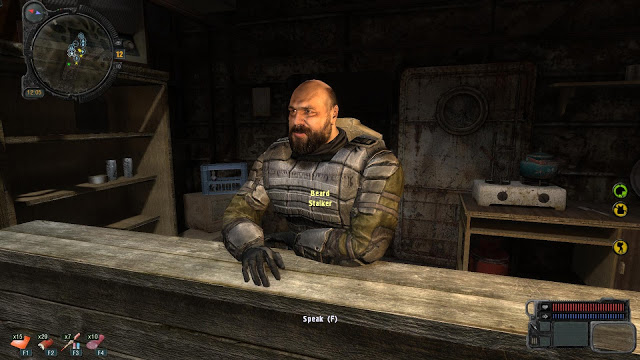 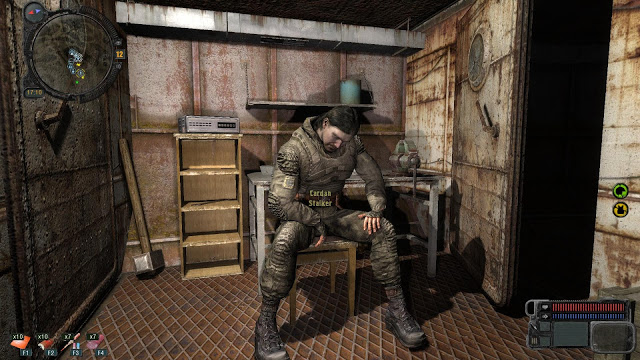 This dude here does weapon mods and stuff. Apparently the more vodka you feed him (Vodka also doubles as an anti radiation potion which makes you tipsy) the better he gets. Unfortunatly more than 3 bottles just sends him to sleep. So I was screwed there. 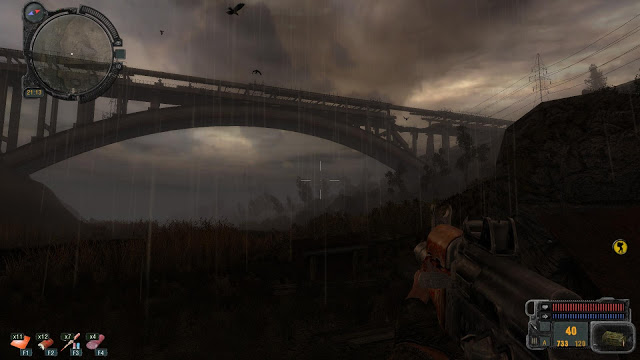 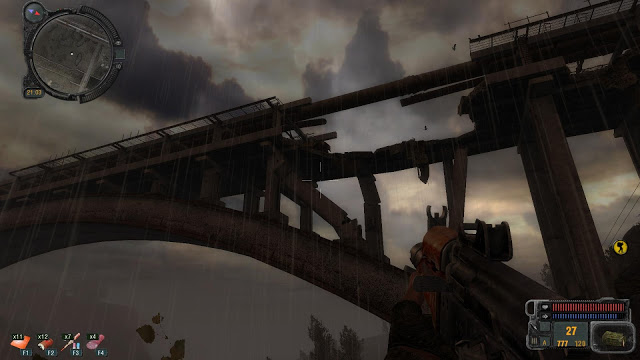 The game doesn’t hold your hand with the quests either, and sometimes the quest items can be rather obscure. Keys don’t float in mid air and glow with an arrow pointing at them in other games. It’s just hiffed on the ground. I spent a decent little while collecting all the bits and pieces I needed from an abandoned army convoy on this bridge. I make it sound annoying and obtuse, but it’s actually quite fun. 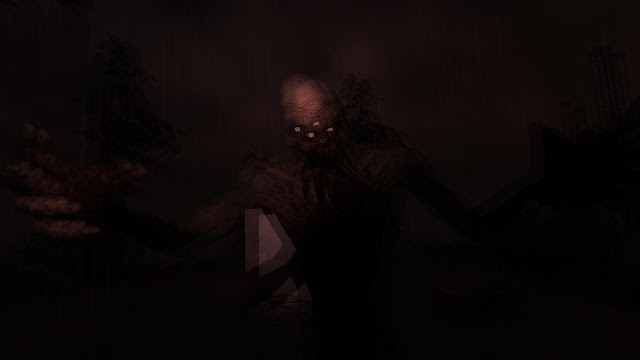 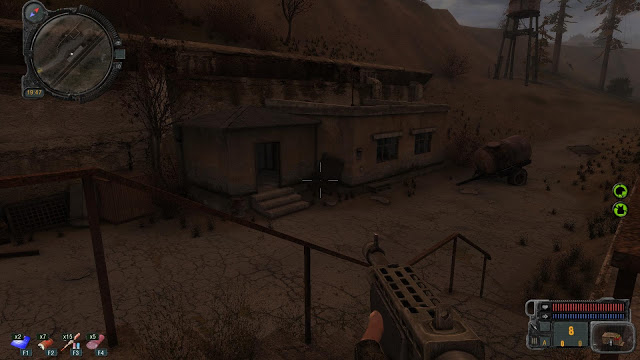 Every now and again there are “Emissions” which turn the outside world into an apocalypse. During these things you need to rush to find cover of a building or cave and weather the storm. The building pictured above is one I had to rush to. Just prior to running to it I was in a bandit camp that had pushed me over the line when they tried bullying me for more money for a hostage than I was willing to pay. So I wiped them all out (The hostage just gapped it out of there and didn’t even help me out). Then the emission started to rumble in. Unfortunatly I had a short amount of time to get to the shelter and I had just saved. So there was no going back. I had to try a couple times but when I got into the shelter it was crawling with Skeletal rat things and old dead Stalkers wandering around. 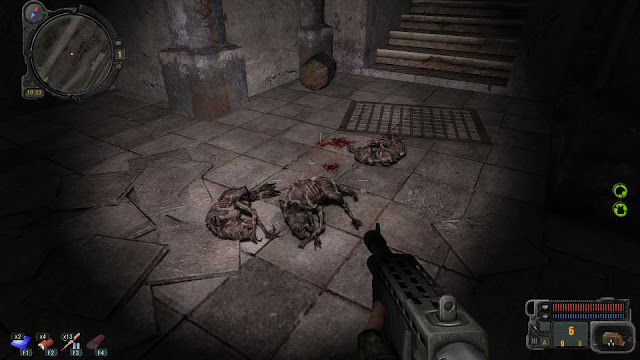 Zombies in this game still use their weapons. Their just shambly dumb versions of regular people I guess rather than “zombies” which are out to eat you.
I fought my way in, hiding in a cellar, listing to all the mutants wandering around in there with me. That was the moment I decided to do this post. It’s an awesome game. 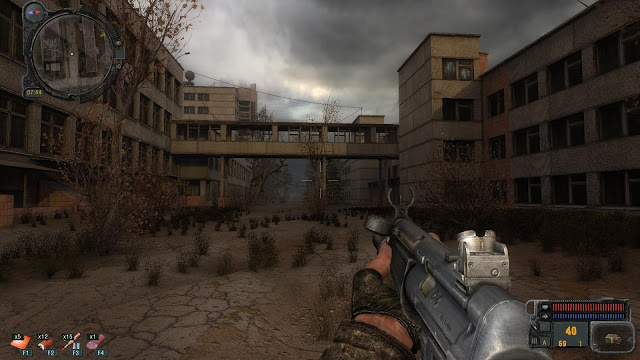 Also it has all these wide areas and bits of architecture to muck around inside. The game can go for a decent stretch of time with no shooting so you can have a breather and just poke around. I wonder how many bits I’ll never actually see inside these buildings because I’m to chicken to go into any dark rooms in there.

I picked the game up for like 2 dollars on a Steam Special. Put it on your wishlist and wait for it to roll back round. It’s worth it, even at full price.
Apparently “Clear Sky” (the third installment) sucks out loud. I’ll have to get back to you on that one.