Phili's so far so far
The lack
Uncategorised January 16, 2009
Share 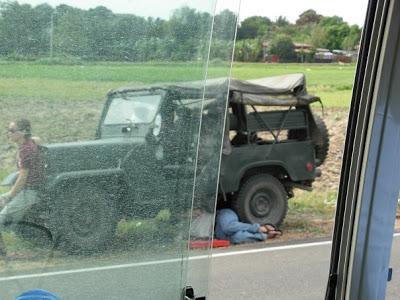 We got to do our “proper” missionary stuff. We got into a van and the doctor took his 4WD. We went about an hour north and then cut into bumpy tracks that looked like they had mostly been used for the ox and cart. We had to stop the van at the little temporary church outpost and hoof it on foot. The doctor smuggly shot past in his 4wd. We mentioned the vehicle later and he said he has to change the colour of it so the new peoples army wouldn’t ambush him. They hide up there in the mountains somewhere. and his jeep looks quite a lot like an army vehicle, so he usually spreads the word that he’s coming in, cause they don’t mind humanitarian aid.
We were told it was a good 15 minute walk. Our guide, not long into the trip, told us it would be a good hour walk. It was more like the latter because our western bodies have been trained to walk at “Window shopper” speed, I swear.
When we got there to the Ita people they were all gathered around. The womans hair made them look like they had been electrocuted. And they were all a lot darker than most pinois. Thats something about the sun here, It doesn’t burn you like the NZ sun does, it just slowly bakes you. I have been on the roof scrubbing and painting it. A few days I didn’t have sun screen, but I only got a little burnt on the last day on my right arm. Everything else has just been changing the shade of my epidermis.
The pastor of the area got them organized into a sing song and then afterwards we got everyone into a line, checking temperature (Me, Alice, Tracey, And phil, our disinfectant wiper man.) Weight, Blood pressure and misc (Glenis, our awesome nurse.) and then everything else goes to doctor Rick. He’s a british dude and is pretty awesome. He’s been here for a year now, committed for two years, except him and his wife are now planning on staying a lot longer. Reaching other people that over the years have been forgotten or become unreachable since the mount pinatubo erruption. Note that paragraph five of the article I have linked. The americans scarpered, I don’t really know about anyone else. The effects of the erruption is still all over the place. The ground is all ash. And the beaches have huge bits of volcanic looking pumis like stones.
We were living quite close to the mount (About 20k away) so it was freaky hearing all the stories. Our guest home was used as a refuge by the orphanage. It was the strongest, everything got covered in a couple feet of ash, and it was dark for a few days. Must have been the freakiest experience ever. The biggest natural catastrophy in the last hundred years, and yet we don’t hear anything about it, it will still be years before people can fully recover from it.
Anyway it was really cool seeing the doctor work. He says the itas are doing a lot better since he first saw them. Childrens bellies used to be swollen with worms infestations, and everyones skin looked really unhealthy. Last week someones husband died of diaherria. He really wants to be in closer contact with them so he can stop unneccessary deaths like this. How do you die of that anyway?…. Eww.
We ran outa water so we got to try out their pump that Rick had helped fund. The water was better than the stuff at camp. Not so much iron in the water to make me feel like ejecting it out of my system. They used to have to go about a mile to go get water. And if the ox had drunk there and made it all muddy they would have to go even further. Man, we got it so easy, our water is served to us from a silver tap.
After we finished we walked back. Most of the team was walking to slow again so it was dark by the time we got back to the van.

The night before last I saw two shooting stars, they were awesome. and its always good to see the stars from a new angle, up here on the topside of the earth. 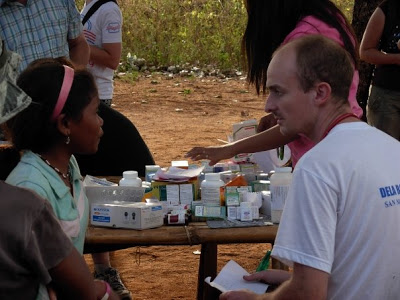 2 Thoughts on the “real” missionary thing