I picked up Goat of Duty on a lark the other day for like $2, and honestly I’m pretty stoked with what I received.

What I expected was a broken buggy joke game from the makers of Goat MMO, but instead I got a solid running reskinned version of Quake with modern graphics from a developer I was previously totally unaware of. It is nice to see that their little games are all getting mostly positive reviews too. 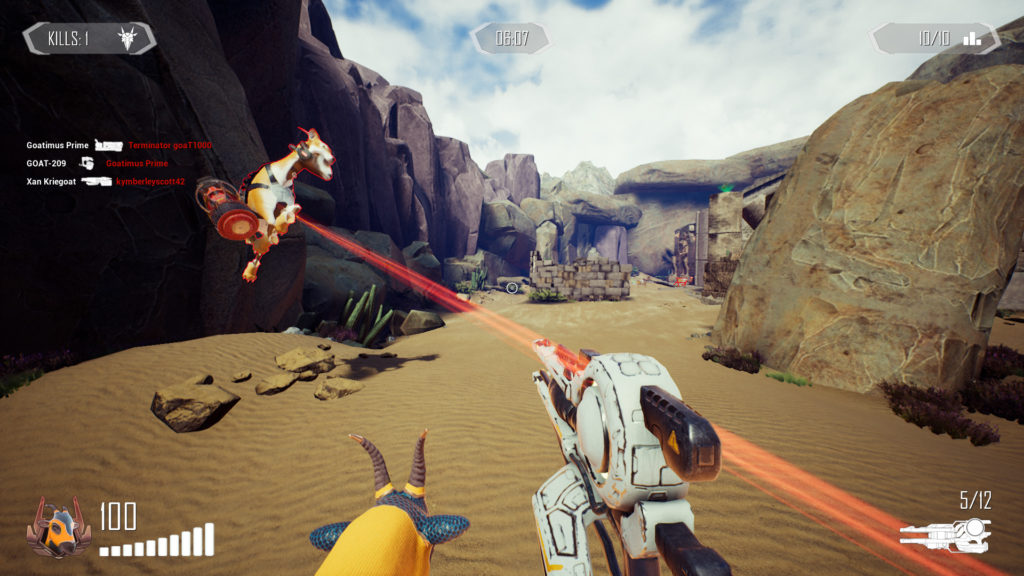 So when you Imagine Goat of Duty, forget any references to CoD. This is an arena shooter through and through. I almost wonder if the goats were a last minute addition when they realised the game would get buried.

Unique additions to the regular arena formula include ramming (because you’re a goat, also very handy for boosting in midair) and playing dead, which ragdolls your goat to trick your enemies into leaving you alone. Funnily you can keep moving around your “dead” goat in this mode but can’t shoot. So you end up with a ragdolling goat sliding all around the stage, albiet slowly. 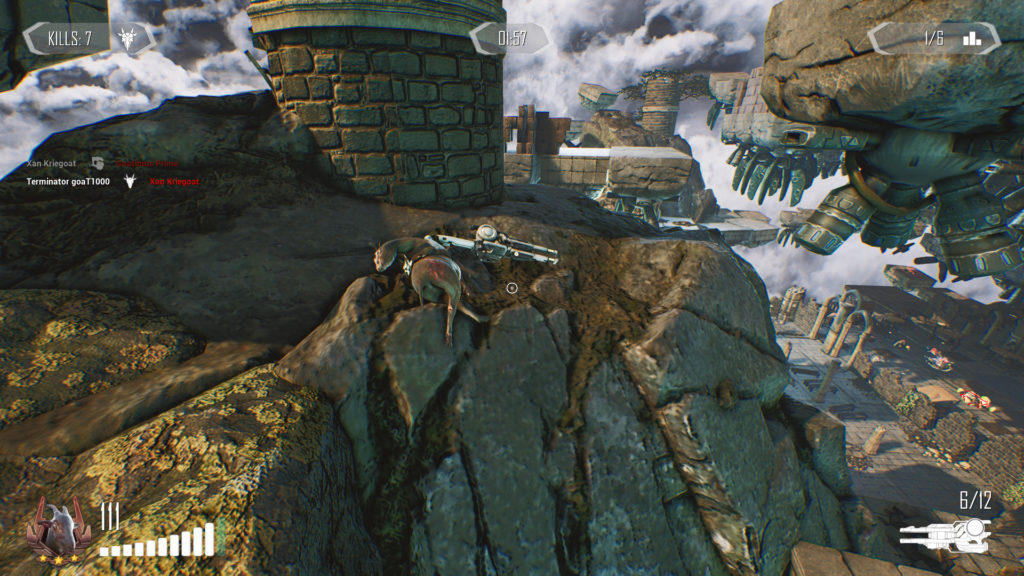 One of my favourite little added features though is (I know this is gonna sound weird) when you get headshot (or shoot someone else’s head) and take it clean off. You get about 2 or 3 seconds of staggering around as a headless goat before you realise you’re dead. It’s a neat little touch, and takes the sting off death a little bit.

In terms of weapons it’s feeling a little thin on the ground at the moment. There are 8 weapons but most of them feel a bit shit. I generally learn maps enough to figure out the best routes to the Blaster (rocket launcher that works with surprisingly gory results), the Impaler and Light Gun, which are both sort of snipey weapons. 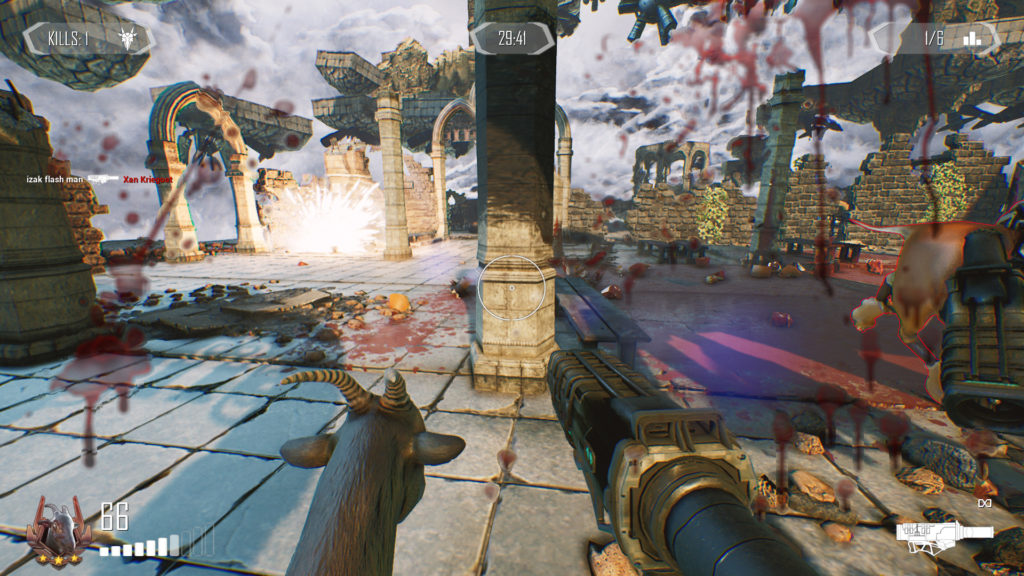 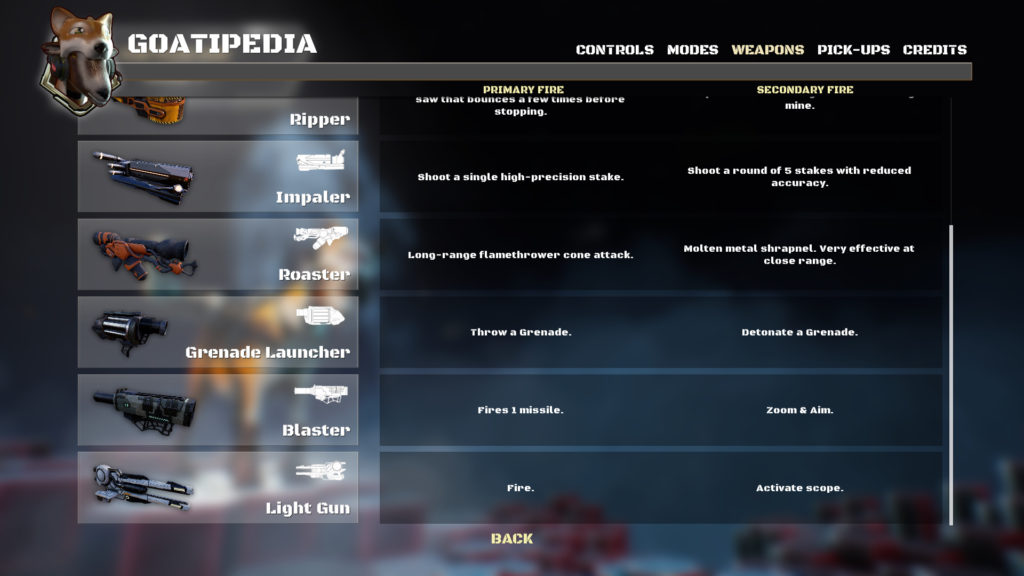 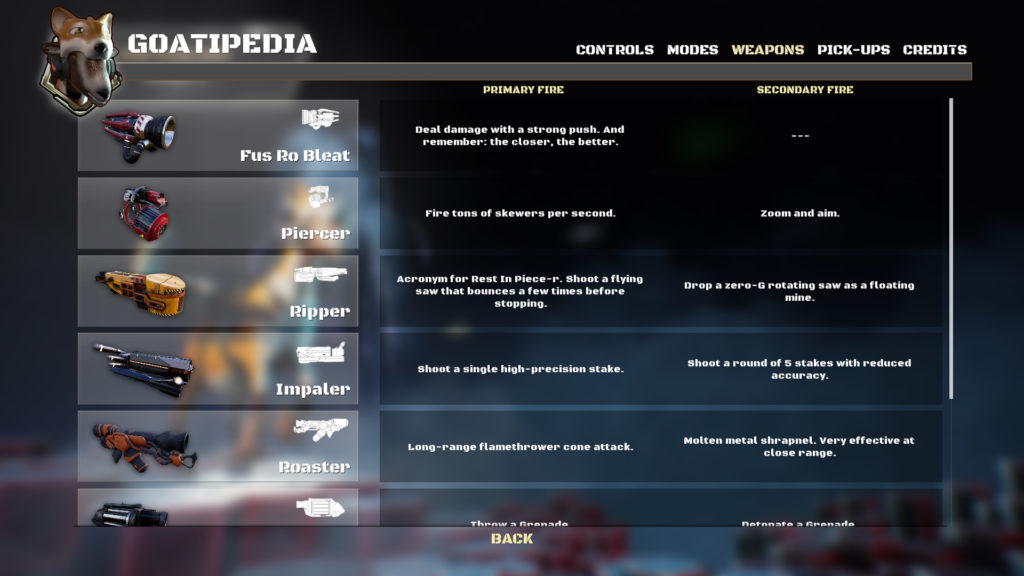 Where it’s thin on weapons it’s big on Game Modes, there’s plenty to choose from here and you’ll have something for every mood. One fast and quick mode I think would be fun with friends is one where you’re all equiped with a Fus Ro Bleat, which blasts your targets away from you. The arena you’re put on is tiny with no sides. So All your kills are relient on your enemies putting themselves into vunerable positions for you to boop them off. There’s also big targets set up, that will insta-kill anyone booped into them. 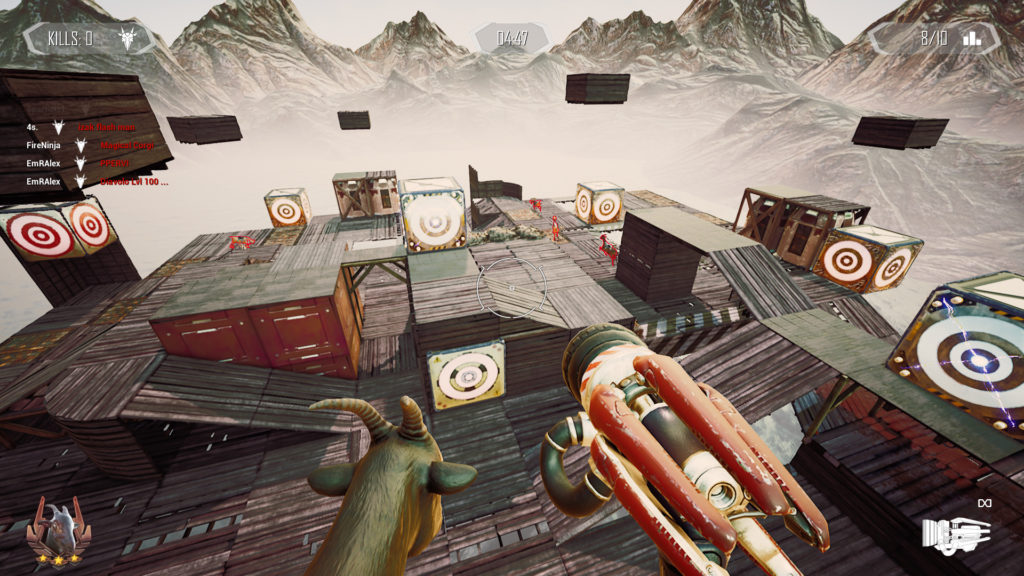 There is a light leveling system that will reward you with new skins as you play. All of them have been done exclusively for the memes. 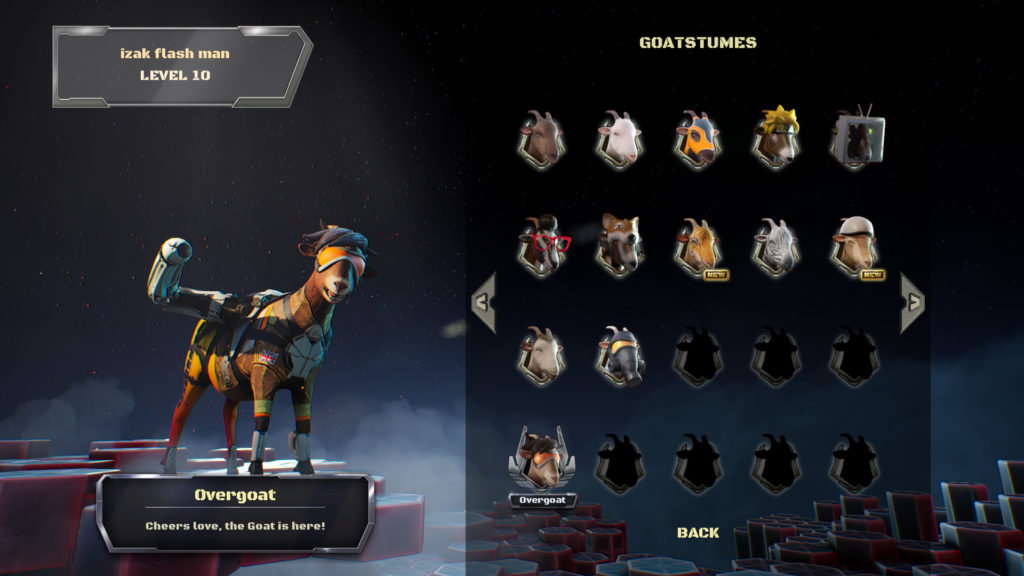 Server populations are a little bit bare at the times I normally play, although I have been matched with a whole bunch of people the first couple times I played. If there’s no one online there are bots you can auto-populate your server with which will make you wish you had real people to shoot. These fuckers are insanely good, even at their lowest setting. Maybe I got a setting wrong, I dunno. 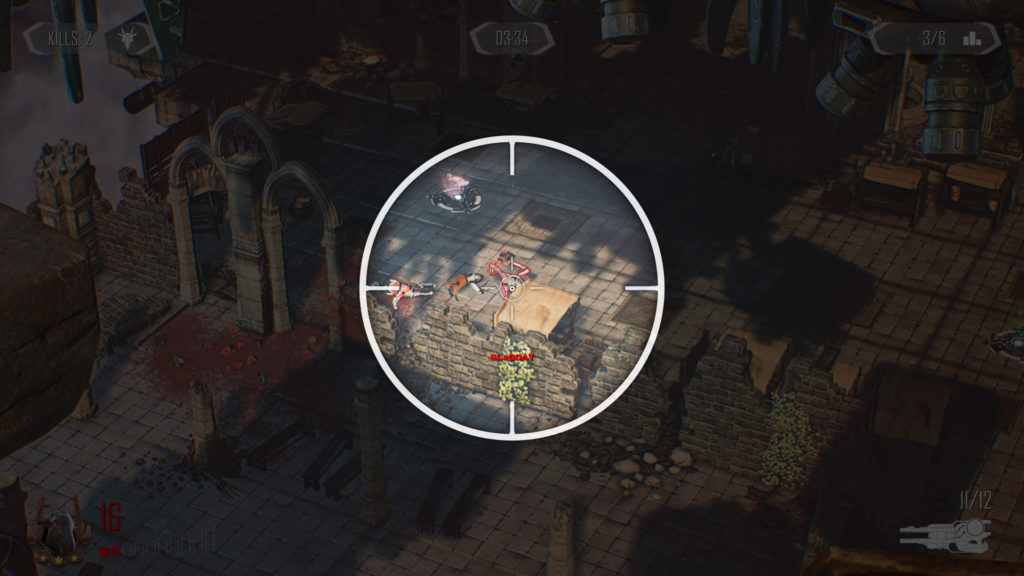 Map variety is pretty nice, with a range of well rendered locations and interesting arenas to duke it out in. 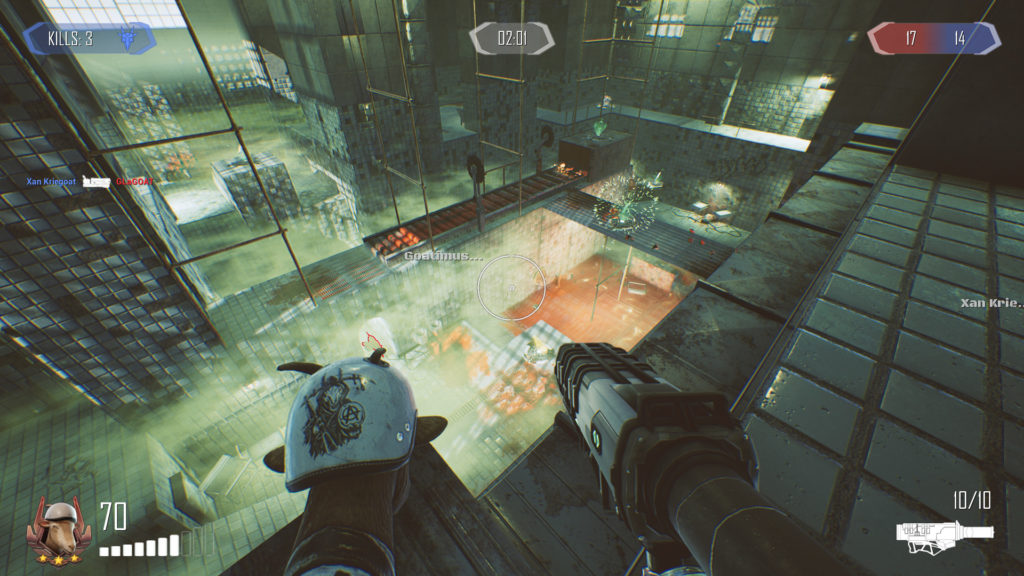 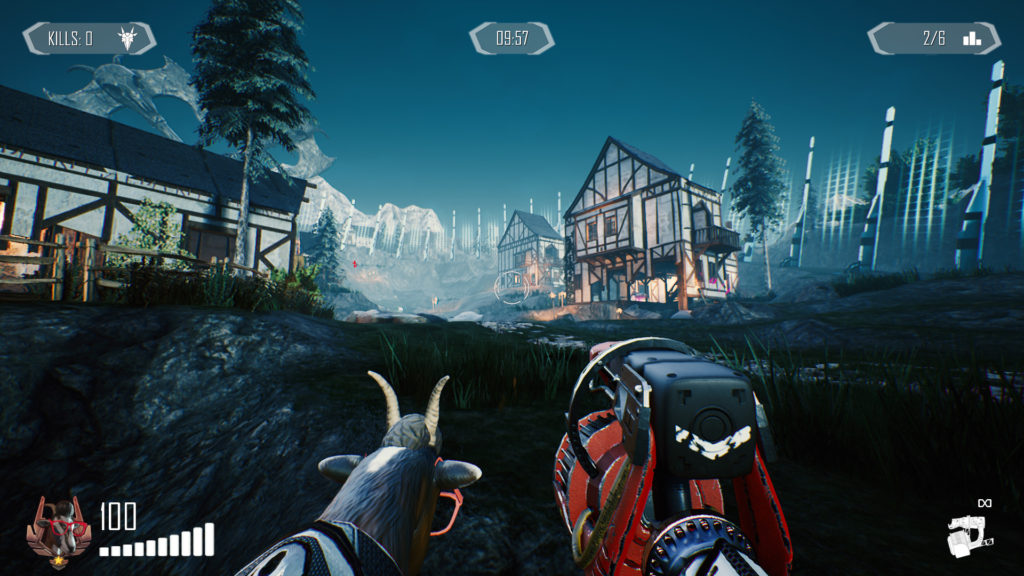 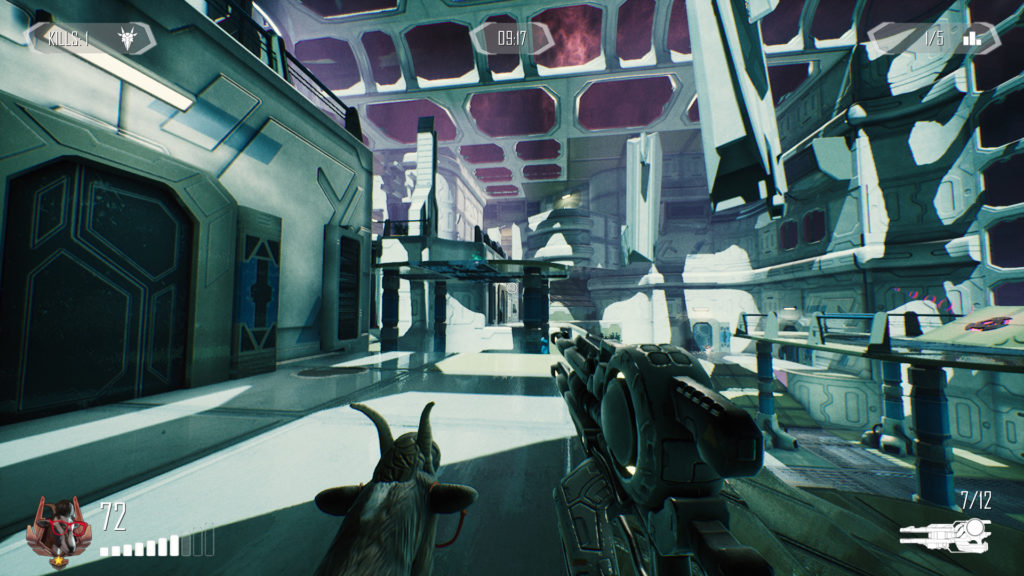 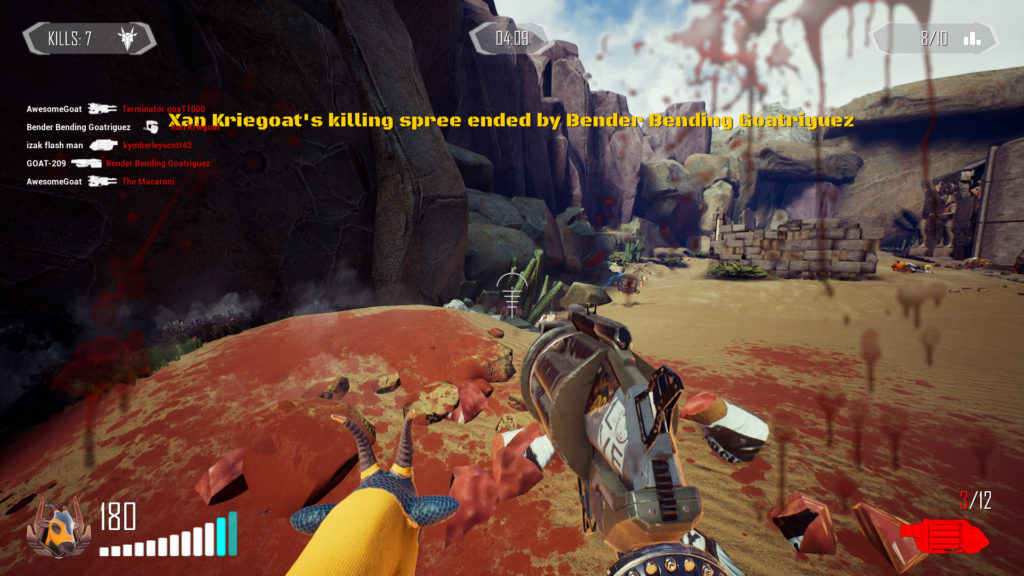 For the $2 I spent on it I’d definitely recommend Goat of Duty. I would like to see them give it an extra level of polish maybe, and come up with some more interesting weapons. But other than that it’s a solid little game! 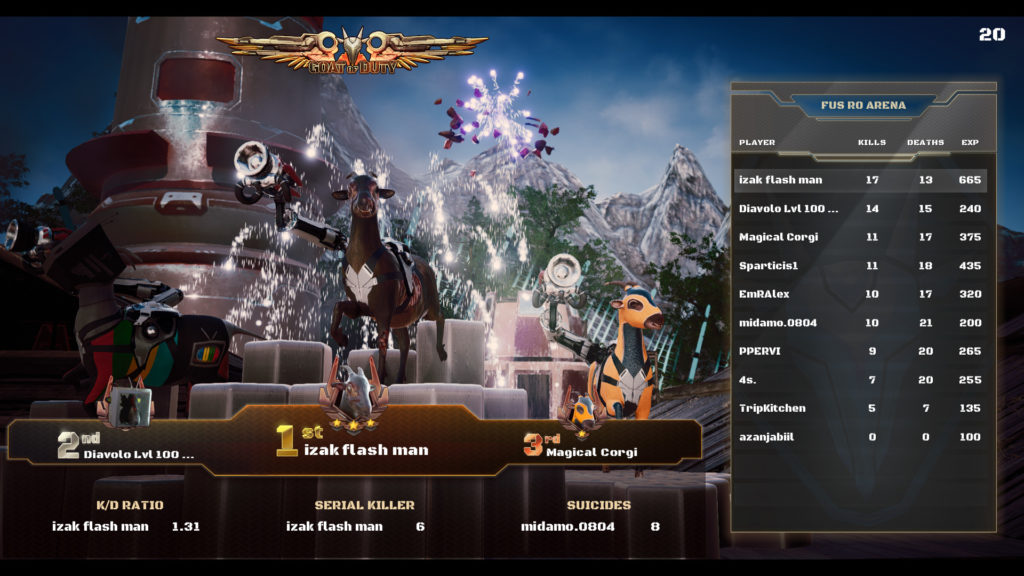