Rhianna Pratchett (yeah that Pratchett) writer of the original mirrors edge game has been tweeting since E3 about her thoughts on Mirror’s Edge: Catalyst. I’ve recently turned into a bit of a ME:C apologist on the Reddit due to concerns about the games direction. It’s kind of refreshing having an “official” point of view on the matter.

One of things I was most pleased about with the first game was coming up with the Mirror’s Edge name (which is still there, so yay!)

One thing I was wondering about and Rhianna mentions, is the more grungy look that will rear up. Someone mentioned during their E3 playthrough that fans may not be used to the grungier look on the streets, so it’s good to know that there were allowances in the original vision.

Interested with this open world look whether they depict the Old Town slums, which are outside the gleaming city.

They appeared in the comics (a few trackers live out there) but never made it into the game.

If anyone is so inclined the Mirror’s Edge comics I wrote with @DCComics and @matthewdowsmith depict the story I would’ve like in the game.

Because of her name dropping the comic I’ve gone and got my go-to comic book store to order me in a copy of the collection. I’ll also have to pick up the one that’s coming out for Catalyst as well when it’s out.
And then there’s the more obvious complaint that’s popping up, that the city is to futuristic and not as near future as the last one. It’s easier to be immersed in a world you recognize as being so close to your own. It’s because of this game I gained such a love for architecture.

Interestingly Mirror Edge Catalyst looks much more futuristic than the original (which was meant to be very near future.) Quite Deus Ex-y.

Would have actually preferred to go more futuristic with the original actually. Near-future is damn tough to write.

You can never bend things as much as you’d like. 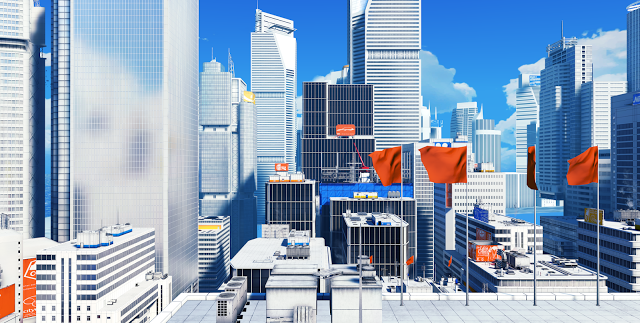 Although far fewer fans have complained about this next bit. Guns. Most admit that they didn’t use guns but they liked the choice. In ME:C the option has been dropped completely. I’m a huge fan of this decision.

BTW Faith was never keen on guns in the first Mirror’s Edge. So dropping gun combat is Catalyst is completely in line with her character.

Although we absolutely would have done things differently given more time/budget we built the narrative of the world Catalyst now stands on.

I haven’t addressed the slight switch in focus that the story has made, which a lot of people are unhappy with. But I will when I formulate some words worth reading. I just don’t think that there’s much of a difference between “faceless Totalitarian government” and “faceless Conglomerate of companies”.