Leifang - Dead or Alive 5 8Bit
Momiji - DoA5 & Ninja Gaiden
Uncategorised June 5, 2014
Share
All these survival alpha version games are getting out of hand. I don’t think I’ve actually played one that’s finished yet. The Forest is one that’s particularly alpha, but that didn’t stop me from getting my hands on it. The trailers looked freaky and interesting so I had to give it a go. Only 15 bucks! That’s a steal! That’s a movie ticket these days, albeit a rip off one. I’m sure I could get more than an hour and a half out of this game. Anyway. If you’re worried about “spoilers” for this or whatever you can close this tab right now. 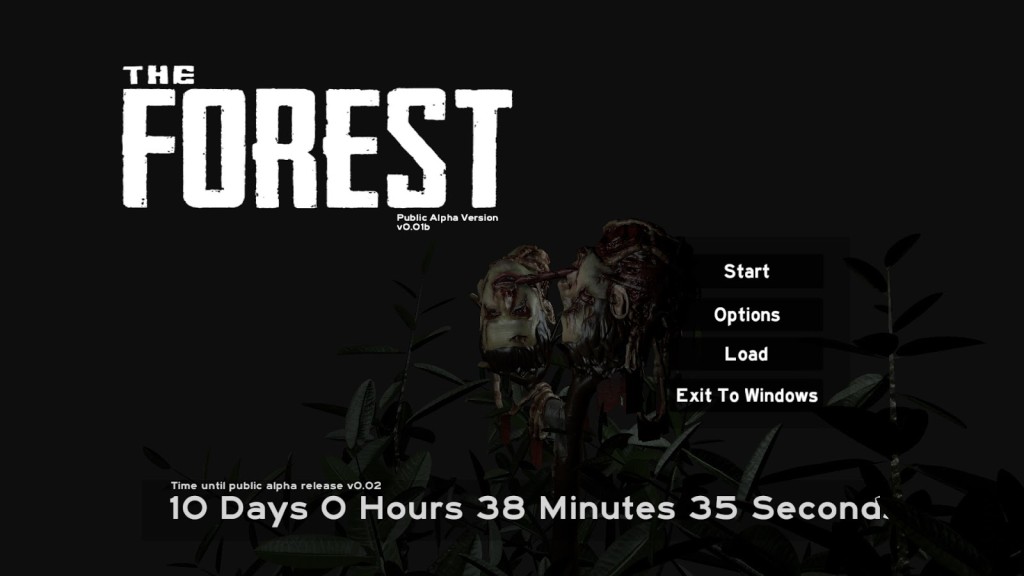 The game starts off in a really empty plane that contains nothing but you and a silent child. The motion blur was insane and it was the first thing I turned off. Motion blur just shouldn’t be a thing. It sucks universally. 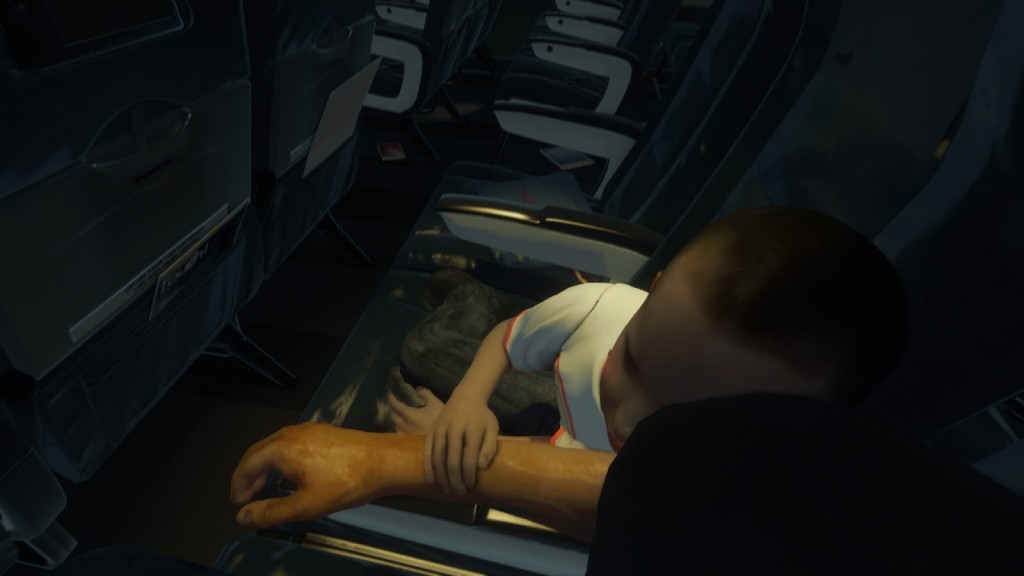 The kid starts bobbling up and down on his seat silently and the aircraft sounds suddenly change. The front disappears unceremoniously and you shudder around before blacking out. Alpha. 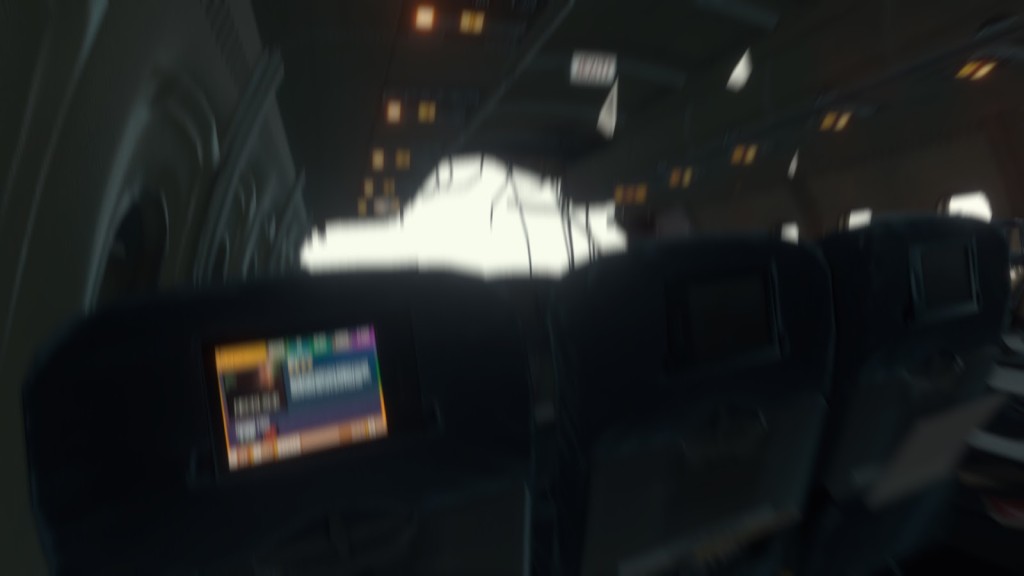 You come to on the ground. I was actually a bit startled when I saw the guy stooping over the kid and then carrying him off. The animations are super good. Did I mention that I was playing this at almost midnight with the lights dimmed, alone in my house with my surround sound headphones on? 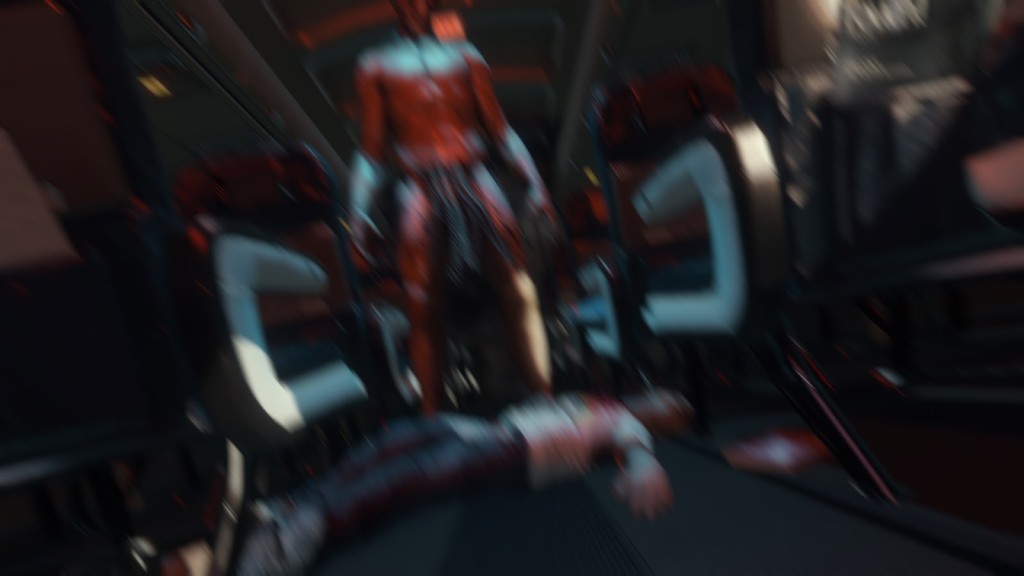 The surround sound stuff is pretty primitive at the moment. You can feel the definite position of where ambient sounds are coming from. 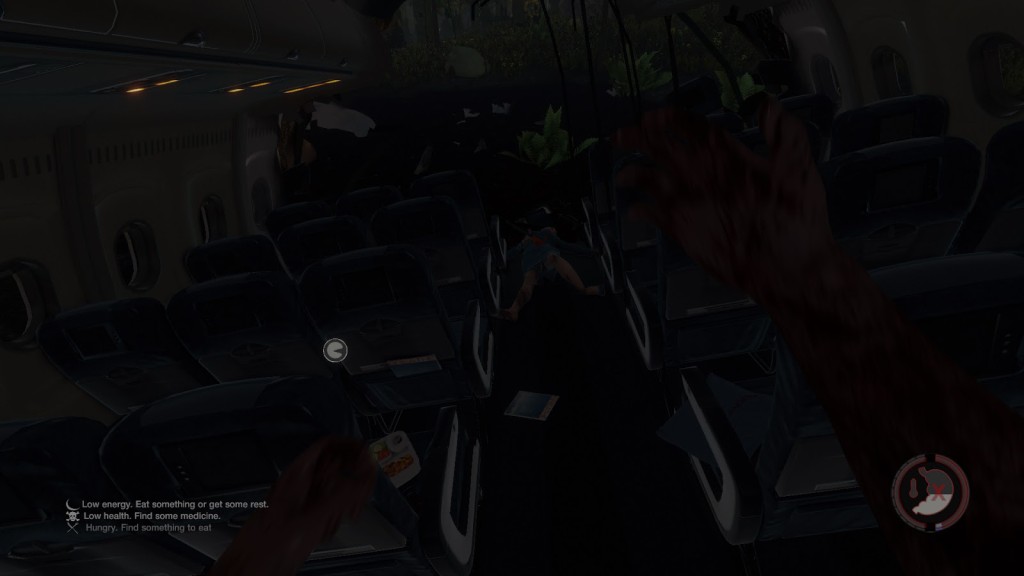 So you wake up. The ground is spammed full of litter and shit for you to pick up. I did what I always do when I start an Elder Scrolls game, pilfer indiscriminately because you never know. I’m pretty sure I just started automatically stuffing my face full of chocolate because my inventory decided it couldn’t handle any more of it. 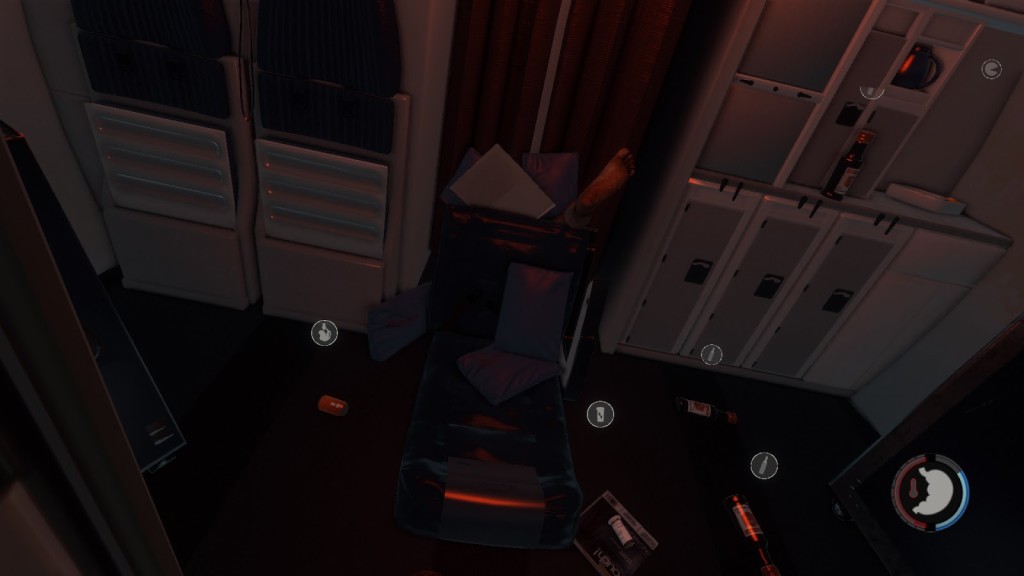 Grab the axe out of the Hostess. Looks like she won’t be joining the mile hile club any time soon. If you know what I mean. Protip: It’s because she’s totes dead. 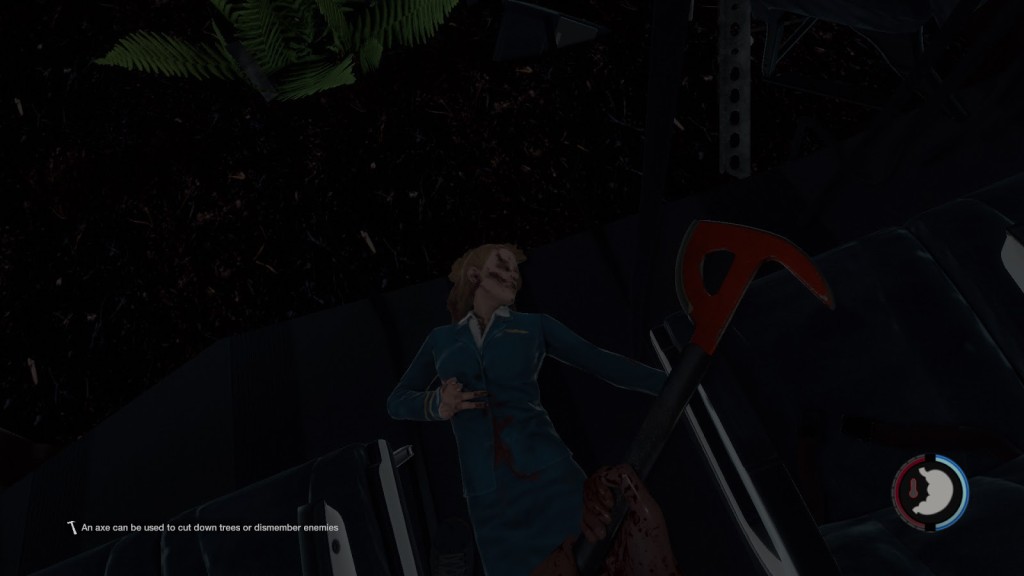 The ground and surrounding area is littered with Luggage that you can smash open for useful things like medicine and tennis balls. 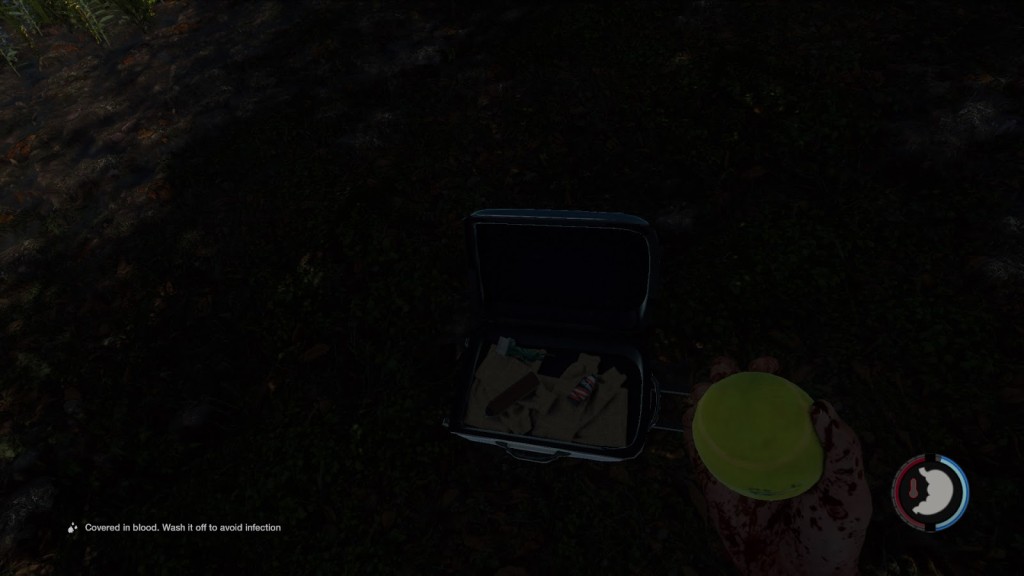 Cutting down trees actually kind of feels like cutting down trees a little bit. After a while it splinters and then eventually crumbles down, then popping and turning into individual log chunks that are still pretty large. You can only carry one at a time and you have to carry it over to whatever you’re building. Sticks and stones litter the ground and seem to have their own inventory space that chocolate bars can’t encroach on. 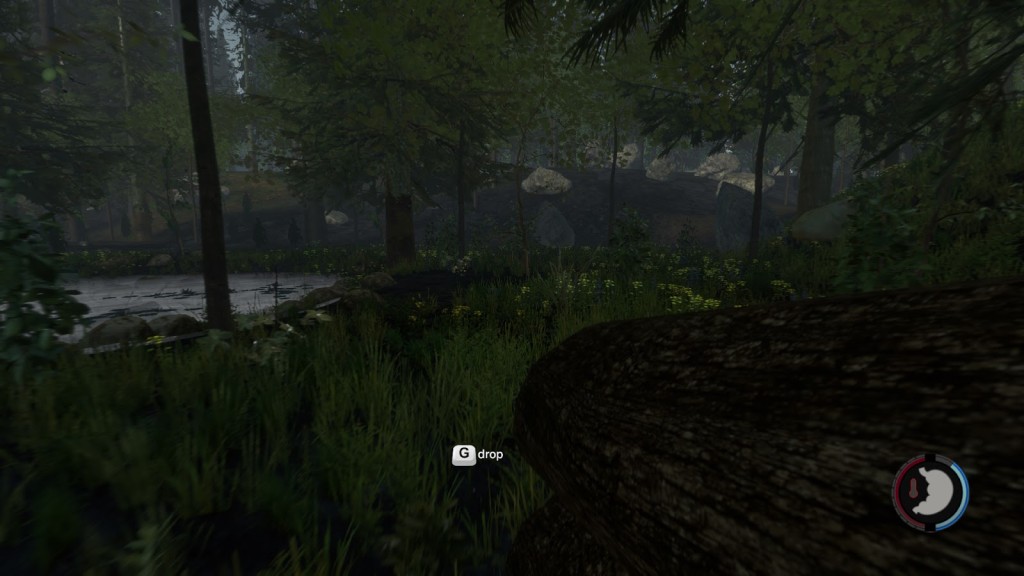 My character kept looking at his bloodied hands and a message flashed up that I should clean that shit off if I didn’t want to get infected. So I went downhill to a little pond and just kind of splashed around. It didn’t have any cleaning stat bars or anything so I just got out when I thought it was appropriate. 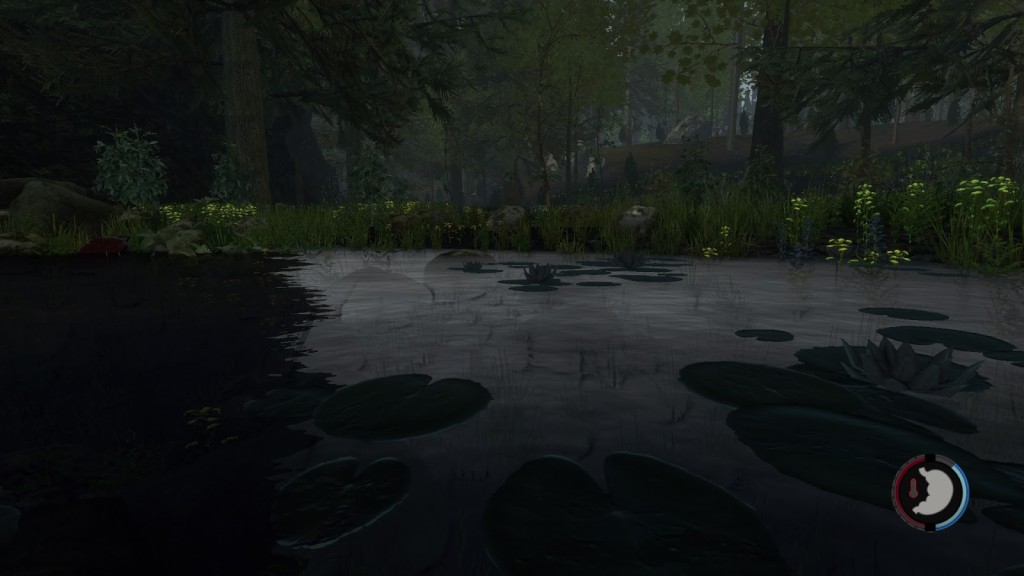 Learnt how to get out my lighter. Nice touch with the parody logo. It goes out every now and again and your character has to flick it back on. 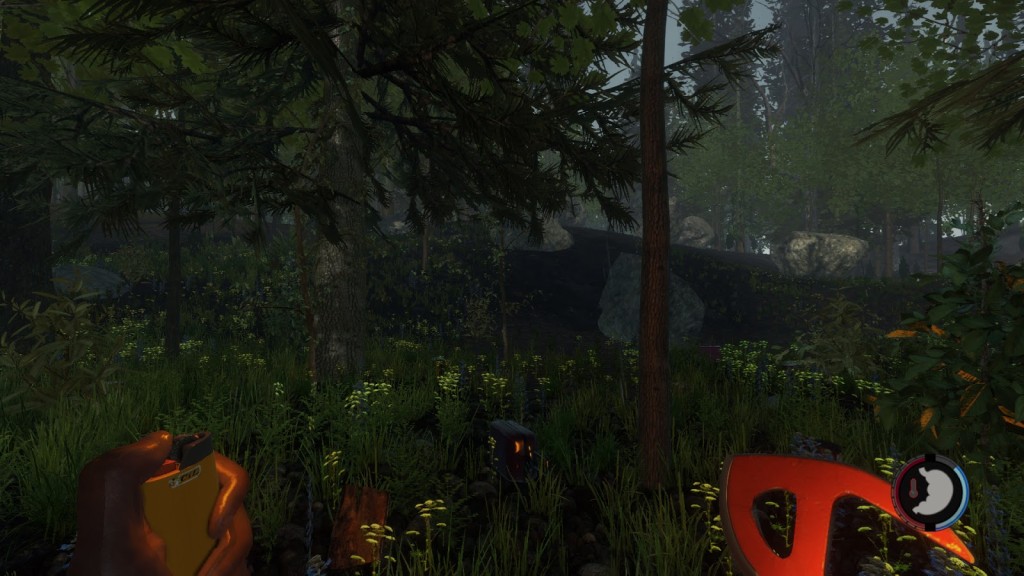 This is what the inventory looks like. You can highlight different things and they get combined on the mat in the middle. I acquired teeth. I’m not sure who’s they were. I’m also not sure if it pauses the game when you go into it. 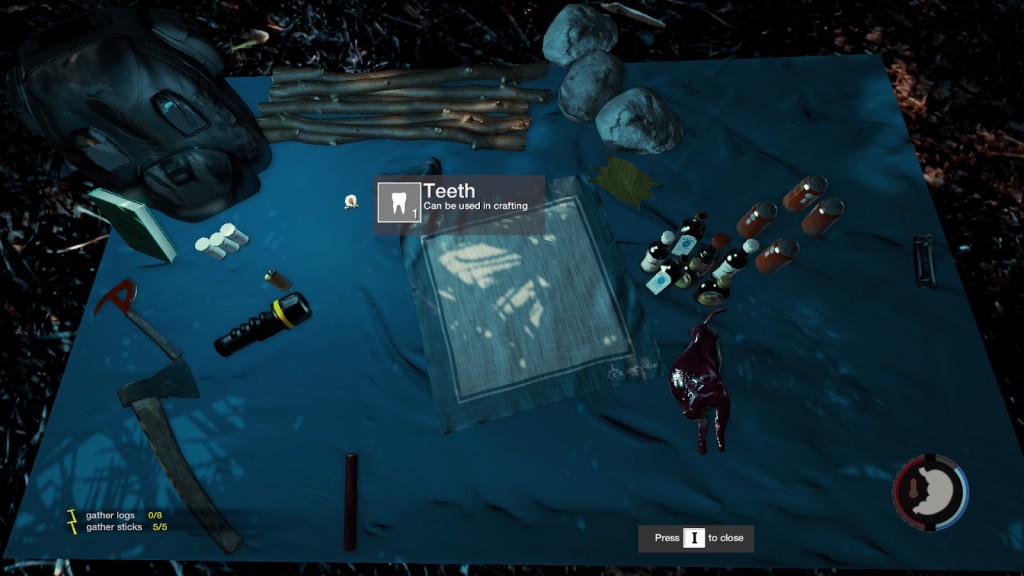 Survival book. as you flick through it there are buttons next to the things you’re learning about which allows you to whip them into existance. You get a ghost outline and then you have to go and click each individual piece onto it. You just spam click, it does the work. 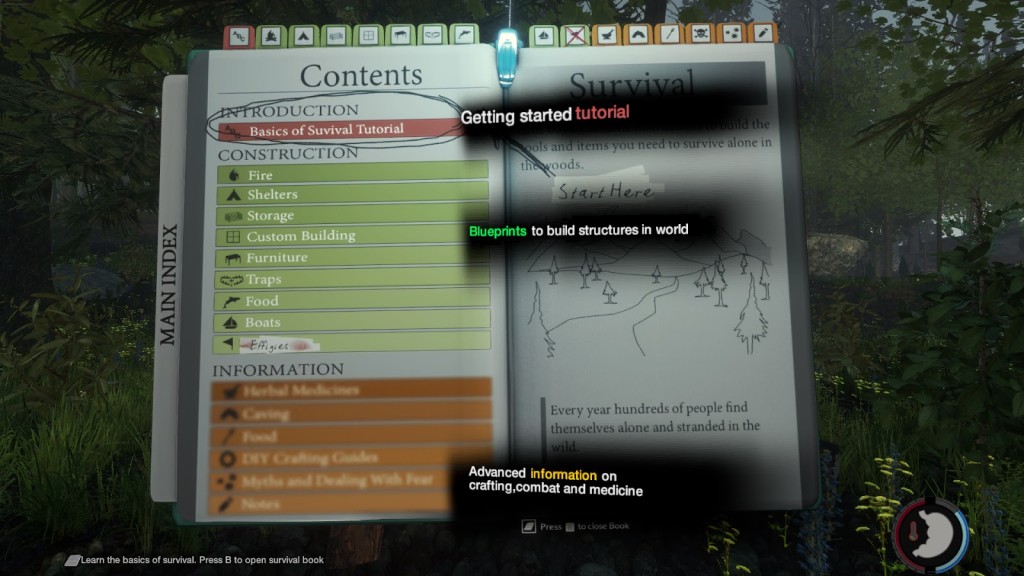 Checking out how fires look. Burnt some inventory. Hope it wasn’t important leaves or anything. 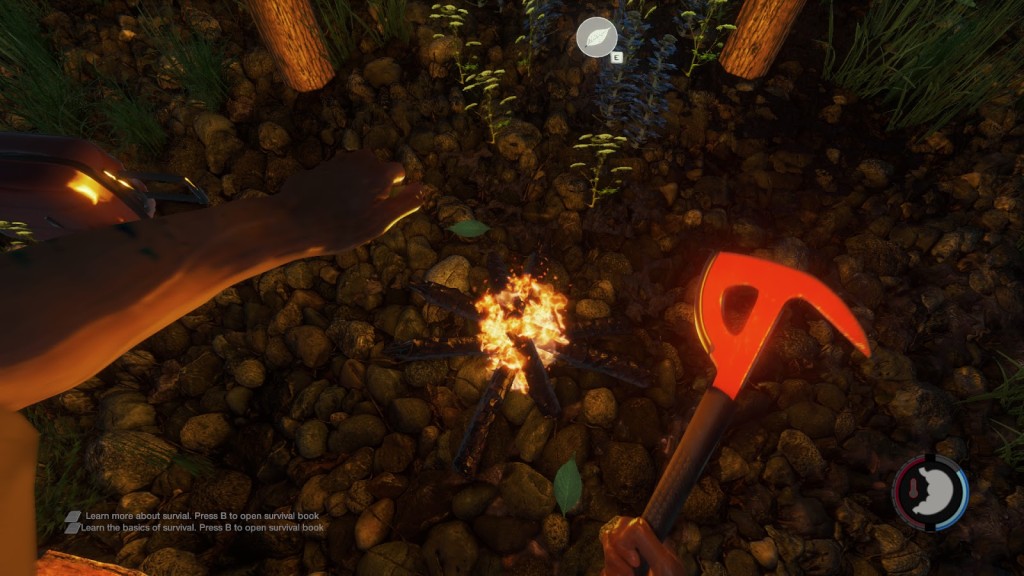 It looks like it is very survivaly by the looks of this foraging guide. I didn’t survive long enough to appreciate how intricate it all was. 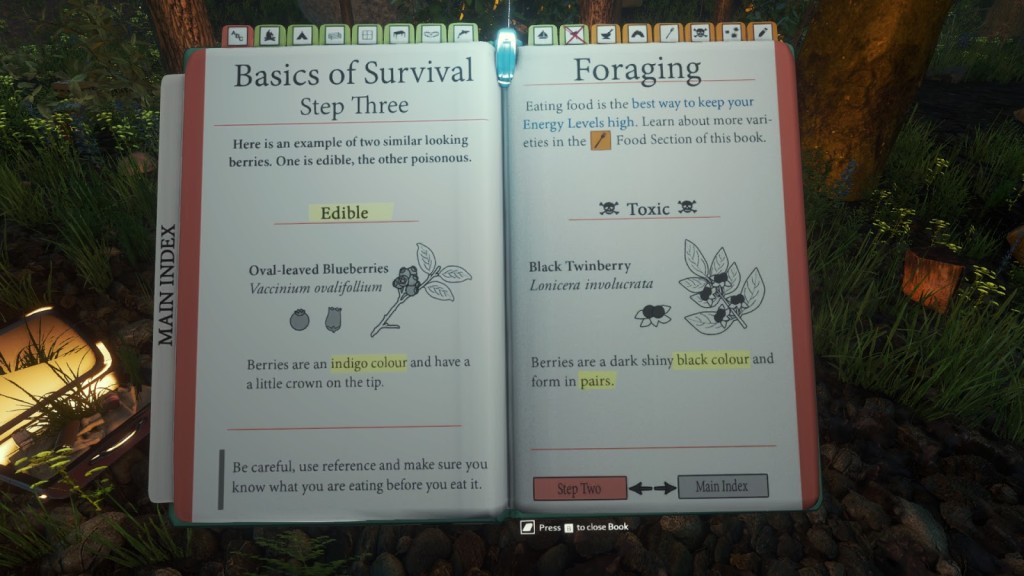 Started happily building my survival hut when four figures walked into my glad. It was actually terrifying. They’re very much alive. None of this shambling zombie business. It was actually really surreal the way the silently moved into my camp. All four are in the image below believe it or not. They didn’t rush me, they just kind of walked, slowly spreading out. I think that’s the most terrifying part, how human it all felt. 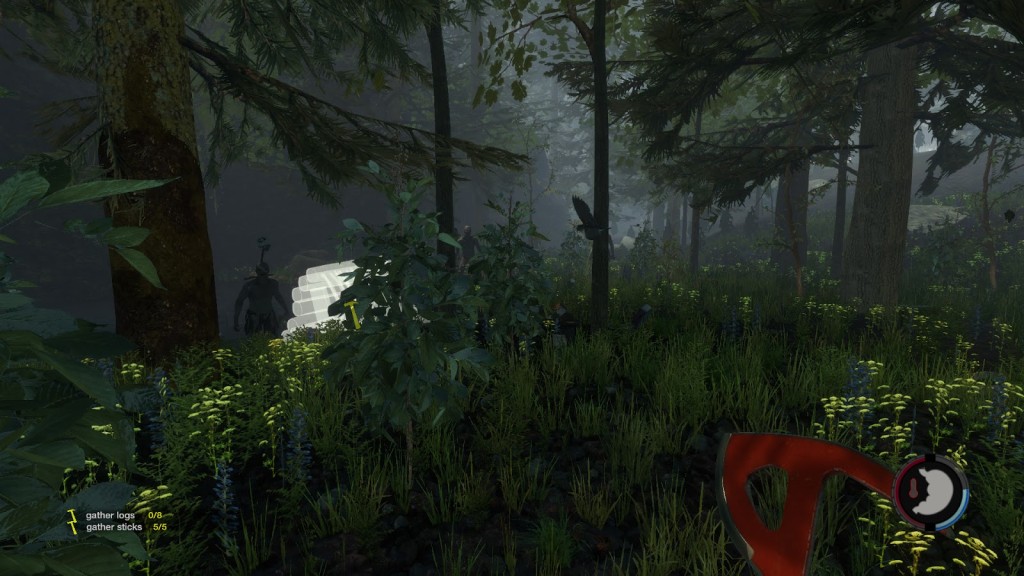 When they started to jump at me it wasn’t so bad. I could just concentrate on dodging and smashing. I didn’t manage to kill any. Not sure if that’s because I had a shit weapon or because it’s a scripted moment, because when you get beaten you wake up in their cave. 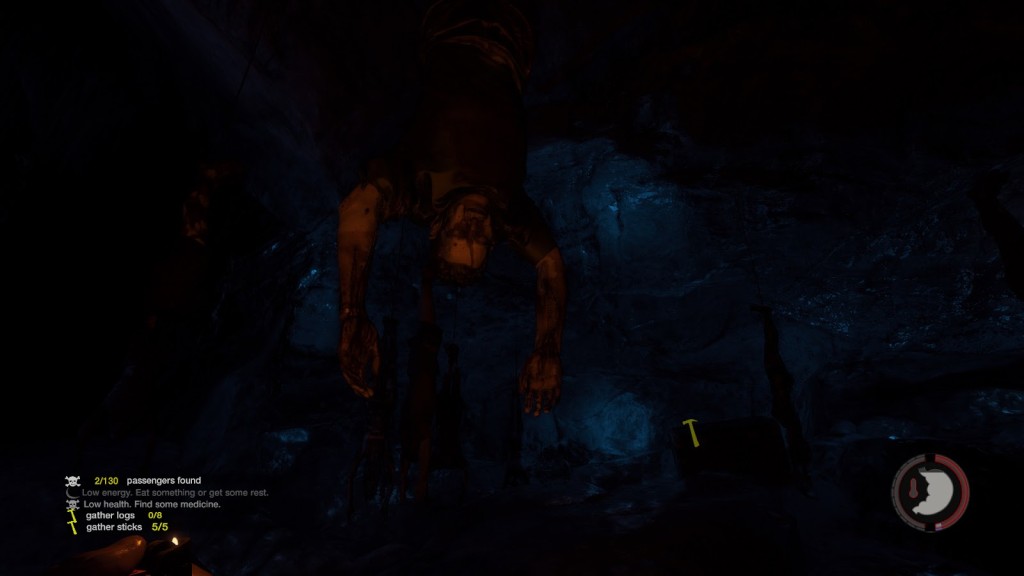 You get all the dangling bodies and some handy tools to get you jump started again. The little glowing hammer in the image above is my base I was working on, still waiting for me to finish it off. Apparently it doesn’t care that I almost got killed. 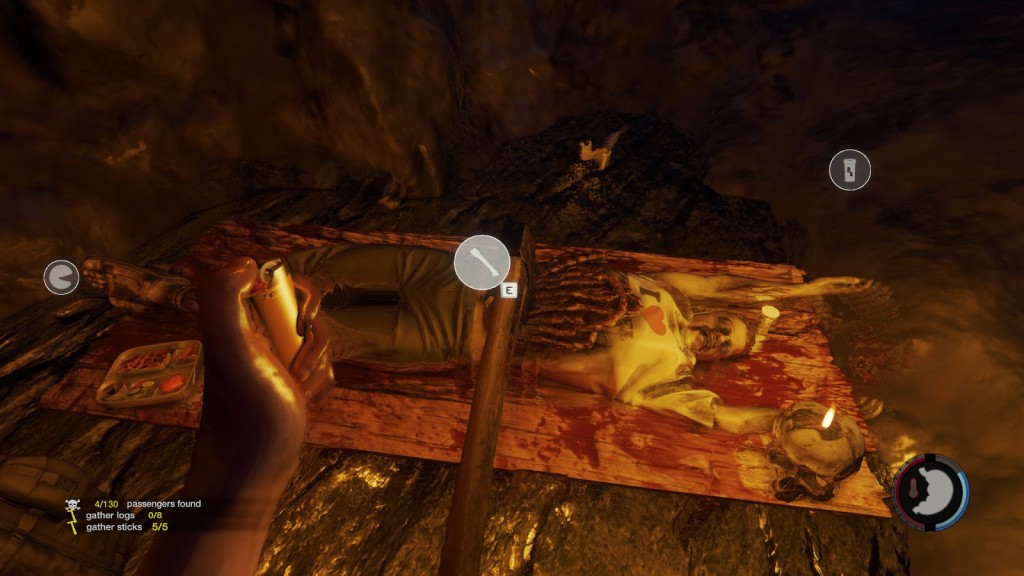 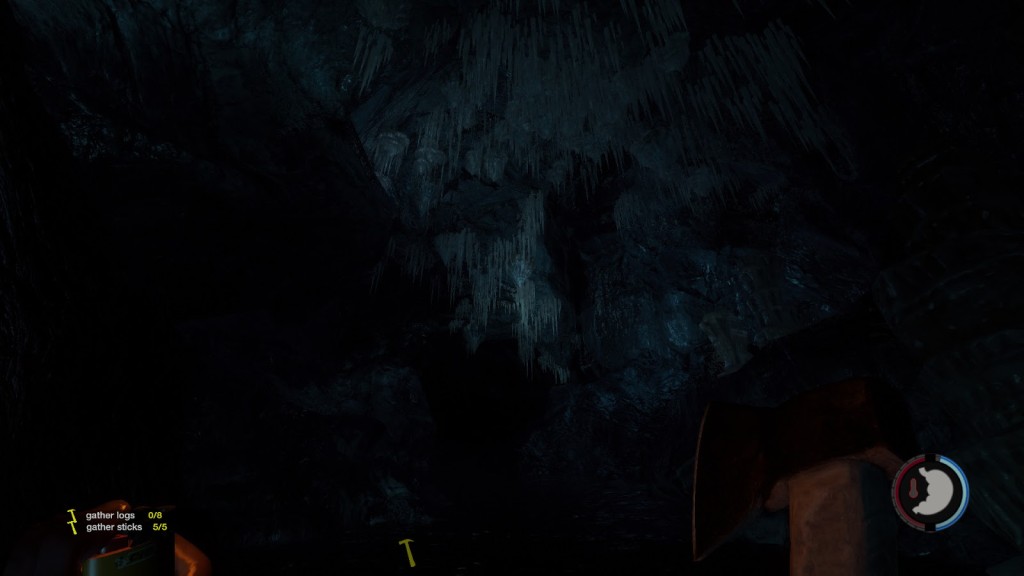 the sounds in the cave are freaky as well. The minimilism of the unfinished sounds actually enhance the scariness. They haven’t leveled all the sounds out yet so some rocks get unnervingly loud when you approach and get “HollowWindyCave.wav” emanating at you. 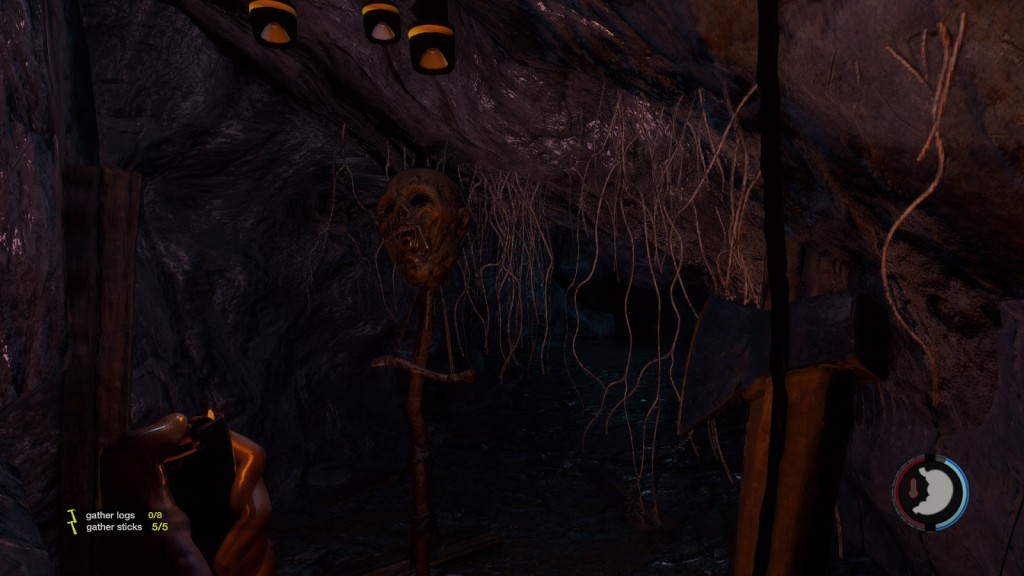 The cave is way deeper than I thought it would be, and branched off in a couple different directions, but I kept just going uphill. Screw hanging around in there. The reflections of water cast on the ceiling is also quite well done! For an Alpha it already looks quite pretty. 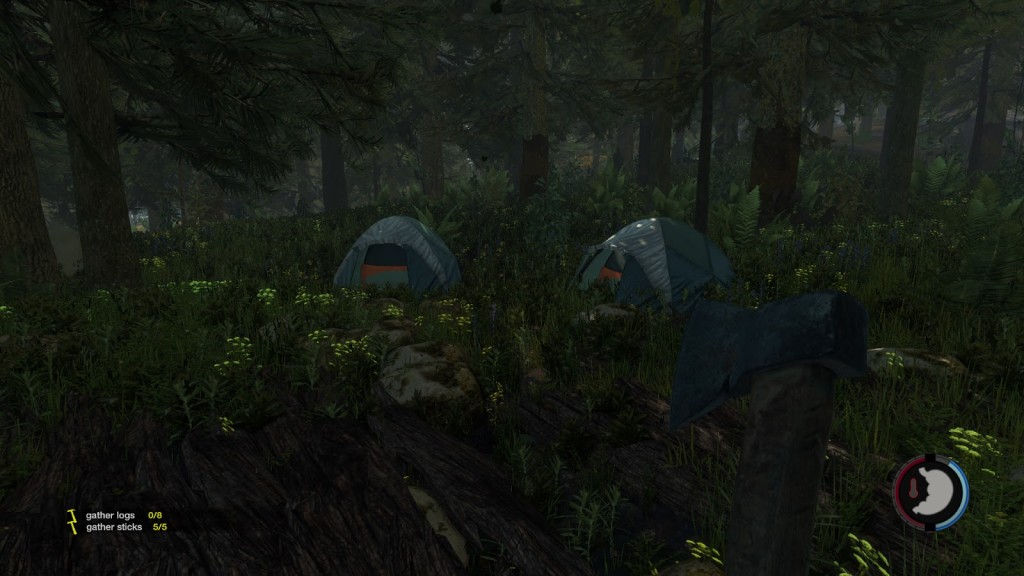 Found some uninteractive tents on the way back to my home. 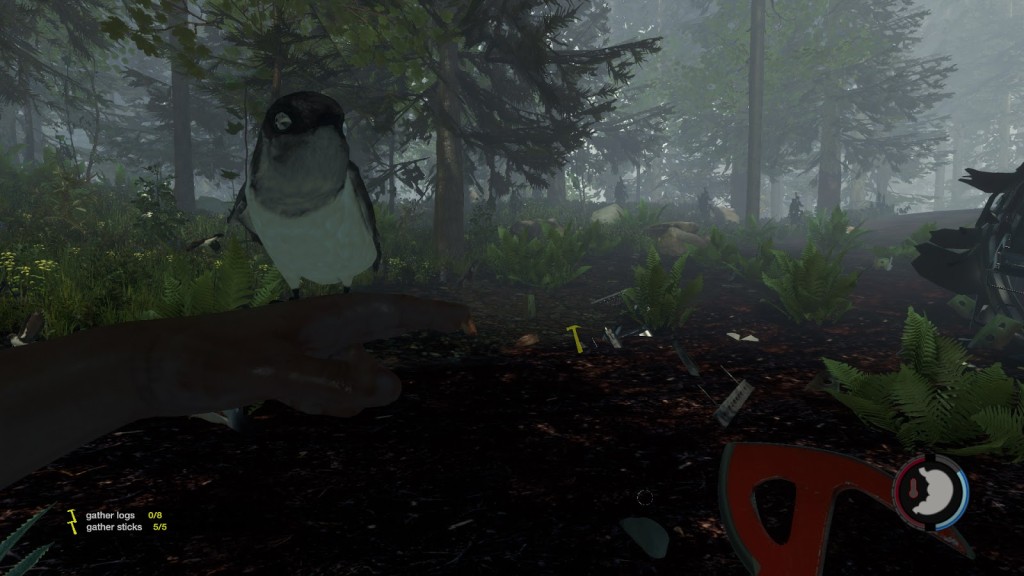 Found my way back to the crash site and a bird decided to perch on my hand. I’m figuring I should have triggered it when I first got out of the plane or something but missed it somehow? 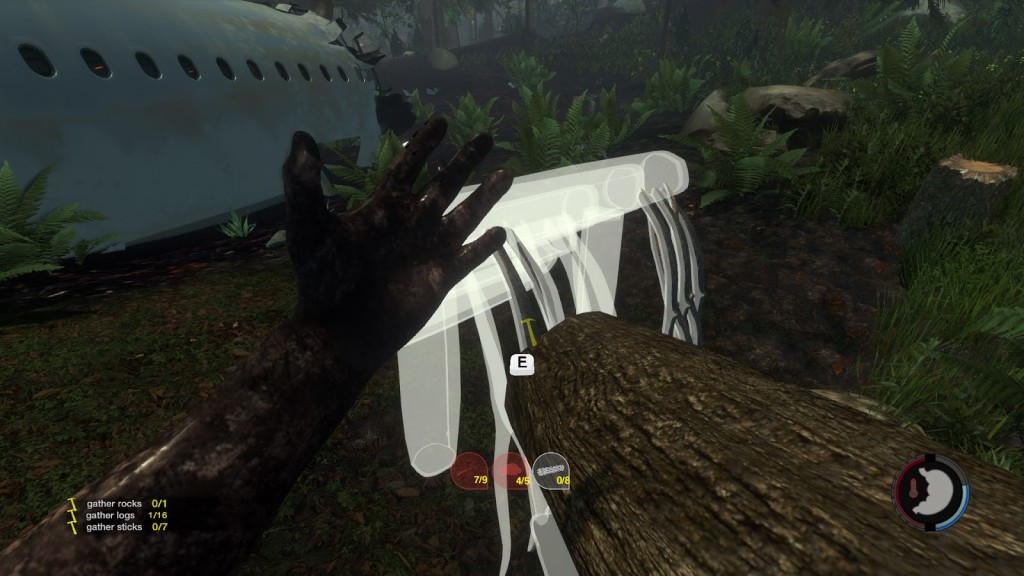 I decided to stay at the plane this time, even though my guy kept piteously staring at his hands. I built my hut easily enough and decided to have a quick sleep in it. It booted me out into night time, which I did not appreciate. Little rasping sounds emanated from the darkness and off key music plunked away in the background. A woman wandered into sight, suddenly jumping and clinging to the lower limbs of a tree. She watched me for a bit then attacked. I managed to beat down the first 3 attackers this time until the fourth one sucker punched me with his cannibal hands. 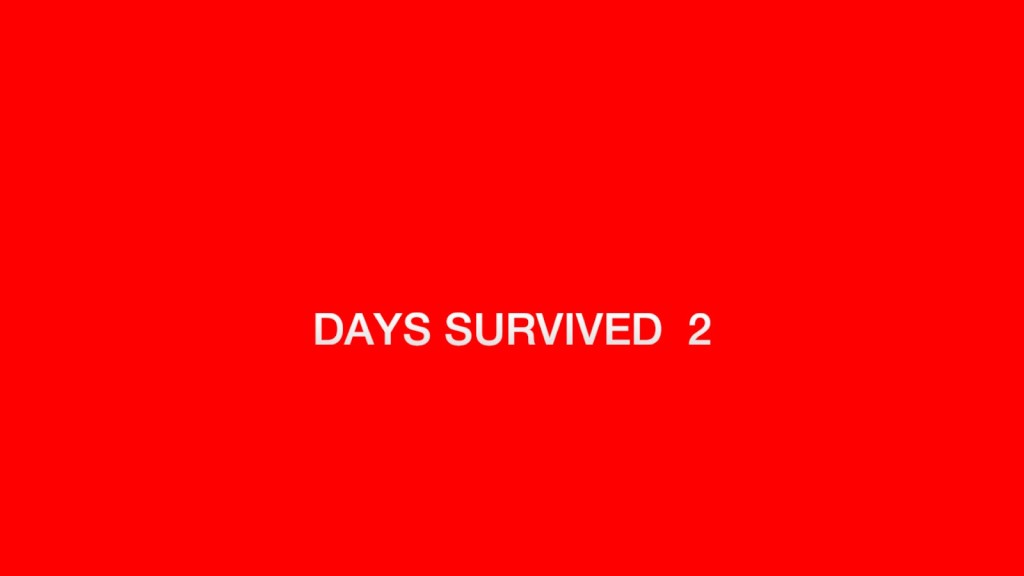 And that’s the origin story of all the nightmares I’m gonna have tonight. I’m a lilly livered wimp, I know.