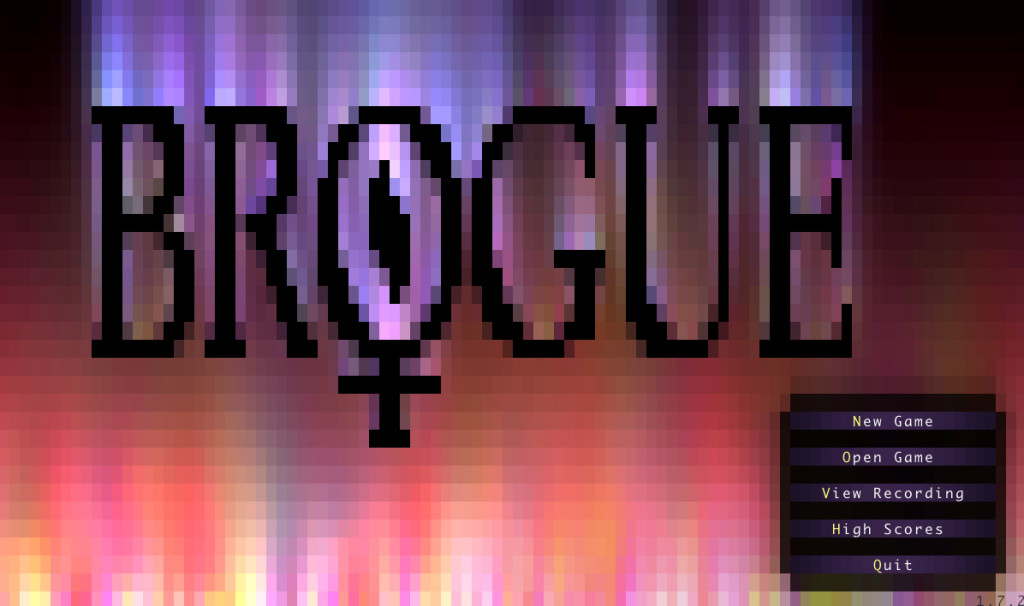 I wanna point you all to this great free Roguelike called Brogue. If you’ve never played a roguelike game before (or an ASCII game) then this is probably going to be your best gateway drug into the scene. It’s a modern game, and the entire thing can be played with the mouse if you were so inclined. Although I far prefer using the num pad. Those arrow keys just don’t get used enough these days. I consider them my Dwarf Fortress keys, set aside for just that purpose.

Gameplay is centered around delving 26 levels to find the Amulet of Yendor, the same amulet from Nethack. There are additional levels for super pros but I don’t expect to be seeing them anytime soon. The furthest I’ve gotten so far is floor 10.
You’re garanteed to always die in strange and delightful ways. My last death just before writing this post was met when I grabbed a key off a trapped alter making the wall explode and rats to come flying out of nowhere. I can honestly say I didn’t see it coming.
The game is rife with strategy and smart thinking and a little luck seem to be the keys to survival. The learning curve to start playing is trivial but the learning curve to finish the game is something else entirely.

The best part about the game though? The iPad port! It’s fantastic! This game is perfectly suited to touch screen devices. It mirrors the desktop gameplay directly without any faffing about. I actually found brogue after being dissatisfied with the Nethack iPad port. It’s all free on there as well.
The least impressive experience (and the only experience I’ve had to pay for) is the Android port on the Galaxy S4. Navigating menus and things are a total pain. I’d probably give it a miss if you’re thinking about getting it on your phone. But definitely if you have a tablet this game is a must.
The game is in active development as well, so we can always look forward to new things cropping up in the game.
Post your best scores here and regail me with your adventures.
My deepest delve so far has been to level 10 with 2861 points. I was killed by a Dar Blademaster who didn’t like the thought of me releasing another ogre from captivity to act as my bodyguard. I already had one, plus a monkey follower. Fat lot of good they did at the end.