Colour Me Someday & Wellington
Snow: Episode 12
Gaming June 21, 2012
Share
If you have steam and haven’t gotten or seen Superbrothers: Swords & Sorcery then you’re really missing out, it’s won awards and everything. I watched Matt play through the entire thing while drawing Snow. It was quite an experience. So much so that I’ve made some art inspired by it.
The main driving force behind me drawing these two pieces (so far) is Jim Guthries music. They recently released a remix of the original stuff which is really good.

I also fell over his stuff again while watching Indy Game: The Movie. Which is another thing you can go get on Steam. Yeah, you can buy a movie on Steam. It’s totally worth it. It seems as though the internet is full of a lot of good things after all. Jump onto Jims Bandcamp to find his other neat stuff. Makes good background stuff.

Oh yeah, one last thing to go check out. I’m doing a choose your own adventure type deal over at G+. If you’re familiar with MS Paint Adventures and want to participate in something similiar feel free to post a suggestion!
Edit: As per the request below by Becky, I’ve done another one as a background for 1920×1080 asect ratios. 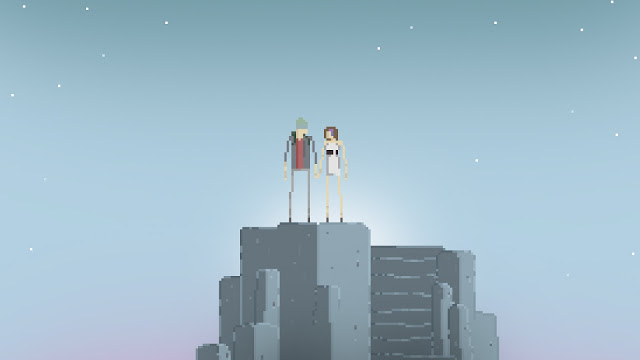