Yesterday I got the pleasure of aquiring my very own Wacom tablet, a Bamboo Capture(Pen & Touch it says on the box). I had a look and I think it’s the latest generation, a CTH-470, so it’s really nice and compact. Only a measly $160. Becky got a medium Intuos 4 (after seeing that the large one was bigger than her laptop.) She payed a couple hundred more than I did, but she gets a hell of a lot more to work with. Workable touch area doesn’t seem much more, but it’s the control panel on the side which makes it worthwhile. She can scroll through layers, change pen widths etc with just a press or two.
The gimmick on mine is multi-touch support. So I can switch it to touchy mode where I can use my fingers to scroll, pinch to zoom in and out (just like on an ipad) and a bunch of other stuff I’m never probably gonna use. 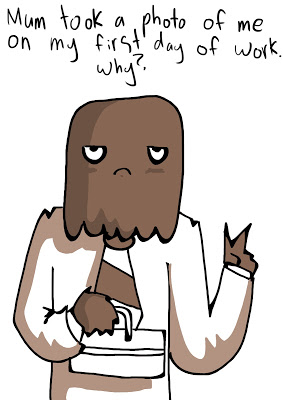 Unfortunatly It took me the better part of yesterday afternoon and this evening to make Photoshop recognize that I indeed had a “pressure sensitive device” plugged in. So any pressure sensitive type things were completely disabled, making my Bamboo as useless as real bamboo, or my old Genius. As a few of you who read this blog already know, I have a history of bad relationships with tablets (jeeze, the title of that linked post sounds like an excuse a murderer would use). So really, it should be expected that my brand new one would give me grief. A lot of forums are filled with people who have had the same problem, and few of them seem to come back with “It’s working and here is a definitive solution!” so let me give it to you.
First play this. Because you will be entering the magical world of the computer space highway. 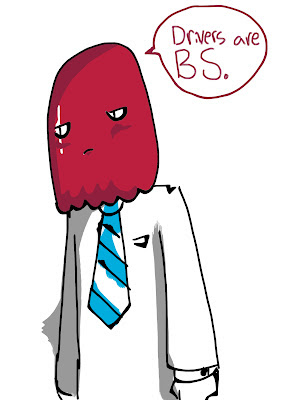 Nuke all your old drivers and remove all the little widgets your Tablet squirreled away everywhere. Then start from scratch, making sure your tablet isn’t plugged in when you do it and restarting when it tells you to. Also download the latest drivers and install them after you’ve nuked everything else. I work on an XP so I’ll give instructions for that, if you have windows 7 tough biccies, it’s what you get for living in the future.

If you right click on “my computer” (not mine, yours) and go properties you’l find a tab that says Hardware. Click him. Then click on Device Manager. In the new window that appears go to Human Interface Devices. Right click and remove all the wacom related drivers. Should be three of them.

Now go to your start bar and find Control Panel. If you’re in the noob view you should see Add or Remove programs. If your in the pro view you should also see Add or Remove programs but it will be way smaller and hidden among a whole pile of crap. Remove Bamboo & Bamboo Dock. May as well remove the Webtablet apps as well. You’re never gonna use ’em anyway.

Do a restart. Now install the drivers (noting the stuff I wrote in bold earlier). Bing bada boom. That little Orange exclamation mark of doom inside photoshop should now be gone. If not, best of luck to you. Remember! A pencil is cheaper, and is far more realistic than your tablet! But way lame. Tablets are like the next step on from your pen license.