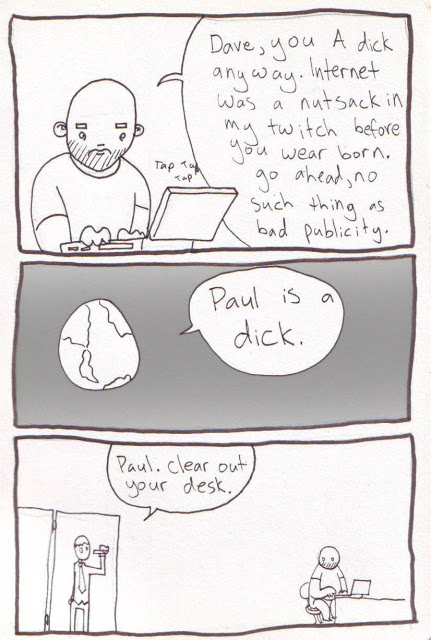 Over the last couple days we’ve been watching internet history in the making. This guy Paul has been a bit of an imbecile. And if there is one thing the internet just loves to hate, it’s imbeciles. He’s lost what little credibility he had, which wasn’t to big a deal. Someone had already made a site about how much of a dick he was well before any of this went down. He’s also lost his contract with N-Control. Who knows what will happen to his company. He’s probably gonna rename it and move his (willing) clients over. Perhaps he should change his own name as well… And learn how to type like a 38 year old.
It’s nice to see the little guy win one for a change. As Nate has said “we may be one little person out of a million, but in this age, one person can have a loud voice too!”
If we can do this, surely we can repeal something like THIS.
I’m kind of wondering if their should be a website dedicated to people ratting out assholes in the industry. I know some of my friends who are trampled on by their bosses at New World in Orewa doing downright illegal things with their employees there. Maybe Penny Arcade will help us. EVERYONE QUICK! Deluge Penny Arcades with our plights! They will be our saviour!

One more Nate quote, just because I thought it was so good.
“Not to be a grammar nazi but shit, how the fuck did you get to be the president of your own ass let alone a company?”