I gots a Stratagaaaaaaay
Flotsam and Jetsam
Uncategorised December 29, 2011
Share 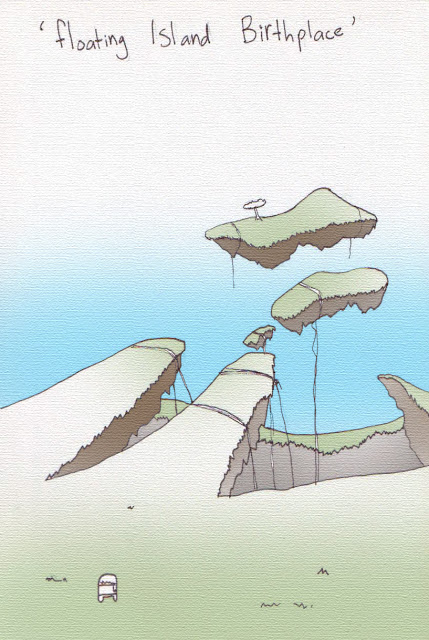 There exists a crater in the blobby world. It’s common knowledge that this crater was not created by an explosion or even a natural occurence. An Alchemist known only as Egamat created an elixer, that when digested would cause the user to float away from the world, as if repelled by gravity. It didn’t really take off in the market. Most people were afraid of the cold embrace of space waiting just above them. Egamat was left with a huge pile of the stuff. He couldn’t get rid of it. He couldn’t leave it lying around, who knows what sort of pickle someone might get themselves into if they drank any of the stuff. He couldn’t dump it in the ocean either. What if it had even a small effect on all the wildlife, it would float out of the water and drown in air. So he dumped it in some plains. It spread through roots and crevices’s, saturating the land around the dumping ground. A few weeks later clumps of world started to break off and float away. There was enough uncontaminated earth on the clots that they wouldn’t float away in space, so they just hang out there in the sky either crumbling away or being held together by trees and things that grow on them.