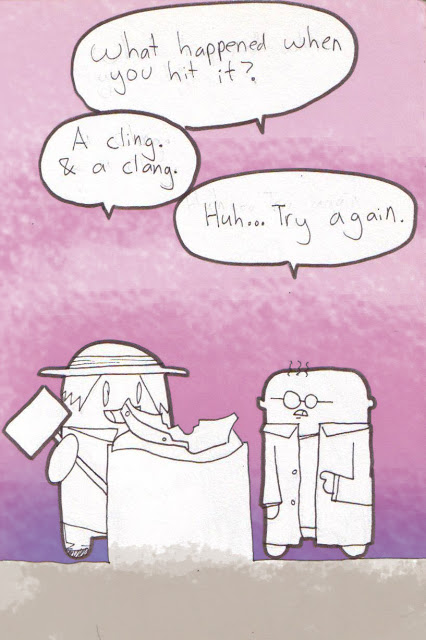 It’s a very 80s set background isn’t it? Kinda reminds me of those ceilings that are all spackly and have something glittery in them. Or maybe it reminds me of “The Nanny”.
Oh yes, yeah, for those of you who went and listened to the D sides album of Gorillaz, there’s a reference to it in this comic.
This is the last strip on my current book. I have a few pages left inside it. But since the back cover has fallen off I have wanted to leave a few pages as a buffer so the drawn on ones don’t get crunched up. As is the tradition I have scanned the inside covers. This book has been around the longest, and I’m kind of glad to have been done with it. As I mentioned earlier its back cover fell off after I stamped on it by mistake. It’s been held together with electric tape since then. 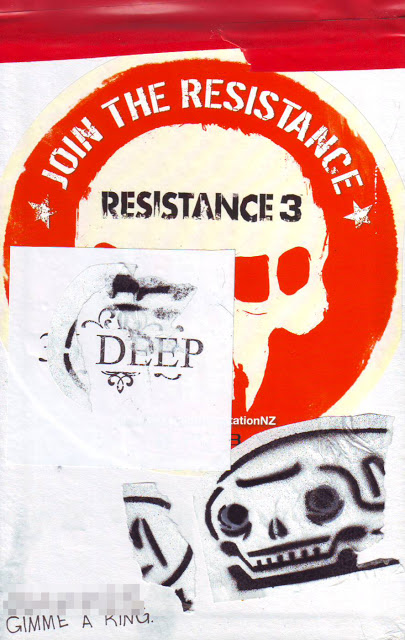 I got the Resistance 3 sticker from uni. I found the “deep” one in town somewhere. The skull one is a stencil sticker I found outside of Armageddon at the ASB Showgrounds. And the bottom left is my phone number in case it got lost. I’m not sure how anyone would contact me though since no one I know can actually read my blocky writing. 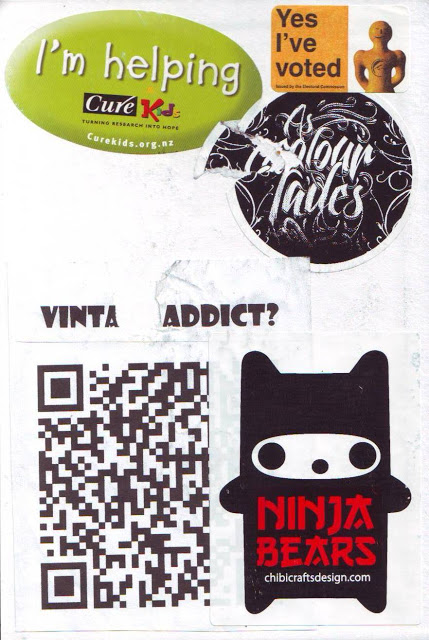 the “Cure Kids” sticker I got on the World Cup opening for donating to the appeal. I made a deal where if they stuck a sticker on me I would stick one on their bucket. I did. Top right is fairly self explanatory. I voted this year, woo. “Colour Fades” is a band sticker that’s been appearing around Henderson a couple months back. The “Vintage Addict” QR code came from K Road. “Ninja Bears” was scored inside Armageddon after Becky Bought a bear.