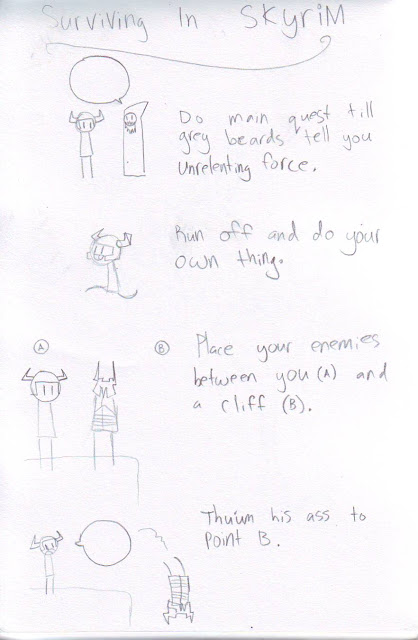 The very first Thu’um you learn has to be the most fun in my opinion. It pretty much turns your face into the egress of a Hurricane, blowing everyone in front of you off cliffs, into walls or into rivers (if they’re lucky). It has  made a lot of boss battles last only a few seconds, most of which is spent watching their ragdolling body bounce down a mountain.
the 1.2 patch is out fixing a couple bugs in Skyrim. I saw threads of people (inevitably) complaining it broke more than it fixed. The foremost being a backwards flying dragon, which really isn’t a big deal or something worth crying about. The first dragon I came across after the patch flew away from me and then got stuck in midair flying on the spot just out of range from me. Another fun post 1.2 bug I got was when I smashed some bandit with my mace and he suddenly spazzed out and went flying all around the room. It was as if he got covered in flubber. He’s probably still in there ricocheting around. It gave me a good Lol. I’ve also noticed that sometimes my second strike with my mace doesn’t seem to count for anything. I’m not sure if it was always like this or its my imagination. Doesn’t really matter at level 48 I’m one shotting most things anyway.

0 Thoughts on Surviving in Skyrim