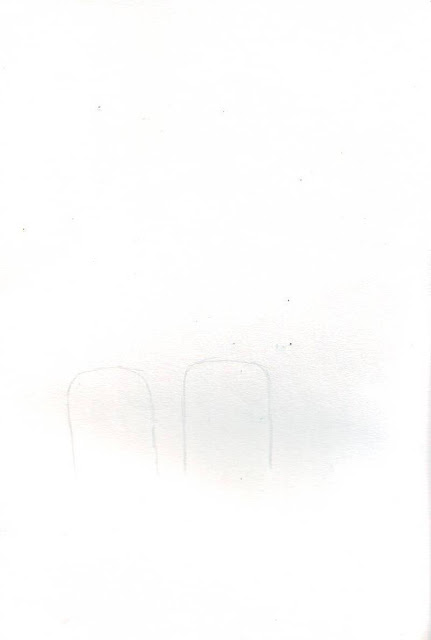 EDIT: The image was added at a much later date. But drawn around the time. I’ve been gone from posting for about two weeks now due to glandular fever. I tried doing a drawing, but I got as far as two ‘n’ shapes, then got tired and had to lie down.

There is no doodle today. I was surprised I even made it to uni. Moving my body at all gave me huge splitting headaches. My eyeballs also decided that they would hurt whenever I swiveled them around. But I had to go to uni to drop off my illustration work for marking. Dear sweet Becky forced me to see the onsite doctor where I had my earhole intruded upon and my pants taken off. Not at the same time fortunately. The doctor was looking for rashes. She said I “most likely have a viral infection, flaring up my lymph glands in my neck or Meningitis… BUT PROBABLY just an infection… Or something that will kill you. Just if you start getting a rash its because your blood is scabbing over inside your veins and you won’t last long.”
Later on Phil, one of our primo lecturers was wondering if I was ok. When I told him about it he recounted a story about one of his employees who went home with a cough once and then never came back. They found her curled up beside her bed dead, her friends weren’t around because they were at dinner or something. She was only 21. So thanks for those reassuring words bro.
Oh yes! And a wee while later two of the girls burst in freaking out about a cyclone that they had almost been in the middle of. We laughed. Cyclones don’t happen in New Zealand. Well it turns out (as everyone now knows) that one had occured just down the road from us in Albany Mall, and we had no idea it was happening. The girls had watched from Gordon Harris as cars and bits of roof were picked up and dropped everywhere.
So yes, this day felt kind of apocalyptic to me, and will probably be the best excuse for not doing a doodle Ill have all year. (I’ll probably post two tomorrow anyway.)

Anyway, I was using everything I just wrote to bring me around to March 2008 to a story I felt was to sensitive at the time, and I could have done no justice for.

It was around that green dot, Hastings, Hawke Bay. I had somehow been roped into hanging out with a bunch of people who were far to confident for their own good. I had only gone because the girl I liked at the time was there. Unfortunatly I was being outclassed by the aforementioned confident, sun bleach haired guys. Plans were made, plans were changed. Either way we ended up outside in the cool of the night, making our way to the beach. One of the other girls, a small little blonde thing (a little overweight with a rosey smile,) picked her way across the rocks to the sand. She was laughing as she picked her way, ever so slowly across the rocks. I watched, bemused at her speed, priding myself on my ability to cover harsh terrain like a goat.
I sat next to the girl I was interested in. She got up and sat with the cool kids, laughing together about how friggin awesome they were. I lay on my back with my hands jammed in my pockets, staring up at the stars. I watched as the group split itself into two distinctive halves. The obvious tight nit group and the flotsam and jetsam. The drifters who hadn’t realized they could be their own group yet.
Eventually the cool kids dictated that we shall now wander round the deserted street-lamp lit roads.

The blonde thing came across the rocks again. having as much trouble as last time. I offered her my arm as something to hold on to as she fought her way over them. She smiled and took it, still flailing all over the place, but at least it made me feel a little less useless. We struck up a conversation and she told me about her life. It contained the hospital a lot. Quite a lot. She seemed to live there. She made friends there who she watched pass away. I’m unsure now of what exactly she had. But the bottom line was, she was extremely fragile. Any day she could pass away. Her doctors had her always trying out new assortments of drugs to try and reverse her condition, or slow it. Some had made her anorexic, while a new set was given to undo that one and given her “A bit to much weight.” she blushed as she told me. The girl I was interested in brushed passed me “You guys seem to be having fun.” she said, with a hint of malice. This confused me a little. She had gone from an evening of ignoring me to jealousy in moments. I didn’t really care at that moment though, I asked the little blonde thing if she was scared or worried or anything. She smiled at me and told me no. “I just live one day at a time. There’s no point in being sad or worried about it.” I was blown away by her happiness. She had been given such a shit deal in life but she never once complained about it. She seemed like the happiest person I had ever met.
Way before I was ready for that night to end we all piled into a tiny car and drove home. We were all crammed in the back and I tried not to crush the little blonde. I drew on the fogged window absentmindedly and she talked about how she had always wanted to draw.
We got to my stop, the first, and I jumped out. Before closing the door I looked at her “Uhm.. I guess I’ll see you round.” “..Yeah.” I slammed the door and started trudging back to my outside room. I stopped. “SHIT! I should have got her number.”
I told Peaky & Zac about her. “You should have got her number man.”
I swore at them.
And thats the story about someone I deeply respect, but neither know the name of or know whether they are even still on this planet. Sometimes when shits getting real I just remember that there was once this fragile little girl, who was twice the man any of us could possibly be.

2 Thoughts on Mortality (It’s all around Us)