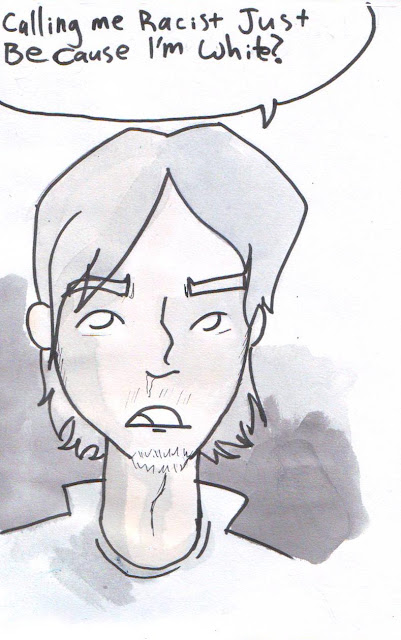 I tried sticking faithfully to what I look like at the moment. hence the weird amount of hair under the nose, and the dribble of snot. I’m still a little under the weather.
Brace for blogrant!

It seems that we are once again jumping on the “Go speed racist!” bandwagon. The guys at Top Gear went and said some cliches about some cars and whoops! Now Mexicans think the British are all Xenophobes. That’s a bit of a generalization. But isn’t that what defines racism?
Just as a bit of an analysis of what they said, strictly speaking, it was talking about cars and oldschool styled cartoon characters of mexicans. I’m pretty sure they know mexicans aren’t exactly like that.
It seems that every day we are having to pick sides.
Pop culture, and especially entertainers seem to be getting a bit of a rap lately. A black god in the Thor movie? The fanboys must be racists if they want people to actually resemble the characters their playing.
Although strangely enough I haven’t heard many complaints about Nick Furry being played by Samuel L. Jackson. But thats because Sam is freakin THE MAN and can play anyone he likes.
Casting for the Hobbit ran into a little trouble when some chick threw a shit because she didn’t meet the specs for becoming a Hobbit. Diddums, I was to tall, but I’m not complaining about them being Hightest. Seriously, if you whip out the race card at every opportunity your just cheapening it and making it less credible when actual racist attacks occur. (The scary thing about the linked article is that apparently it went largely unreported at first.)
We also have our very own Paul Henry, who got fired for what was less racism as it was giggling at a funny name.
Also back home we have Hone Harawira, a politician, so should be taken more seriously than a breakfast news host. He talked about White Mother Fuckers. I think if we’re going to throw someone out of a job for laughing at a name, calling a decent proportion of the country you work for a “mother fucker” should be a free deportation out of here. Note: for those not up with the news he got fired in February this year.

Now lets go over that last paragraph again, If that was reversed to talking about “black mother fuckers” I’m sure that story wouldn’t have played out for another 2 years before coming to an end.

But at the end of the day, I would prefer everyone to able to speak their mind about other races and cultures freely. Likewise, People can take the comments any way they like. Perhaps they could take it on board as a sort of cultural critique, how can you improve next time your building a national persona?
If people don’t say what they’re actually thinking then we would all be liers, and only politicians lie. And we don’t all want to be yucky politicians now do we?

Next time on Izak “Controversy” Smells: Interracial Gay Marriage
(& who wears the pants in the relationship without looking like some sort of supremacist.)