Minds are for Us
Giant Ass Pip
Uncategorised January 23, 2011
Share

I have to say this more often than I like. Maybe it’s called denial but I call it STFU.
I think my early roots are in anime. I grew up always drawing Trunks from DBZ. But these days I abhor the idea of a million new artists drawing exactly the same, albeit really well in some cases, but exactly the same none the less. Ah each to his own, even if his own is a million other peoples own.

In yesterdays post you may have noticed an image in a frame stating “Where did my future go??” I went ahead and bothered checking around and found out a bit more about this figure.

Apathy has been around a buncha months so far I think. I’m not sure when I started seeing the first apathy stickers appearing on crossings in town. One of them actually managed to sneak into one of my posts a while ago in December.
Anyway, here’s Apathies site. It seems as though he wants us to interact with the posters he pastes up, so shit, take a vivid into town with you next time and give him a piece of your mind. The biggest concentration seems to be around Symonds street. 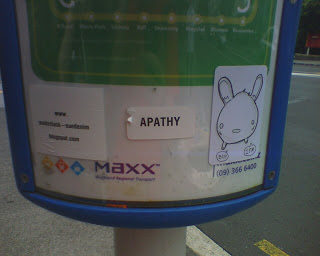