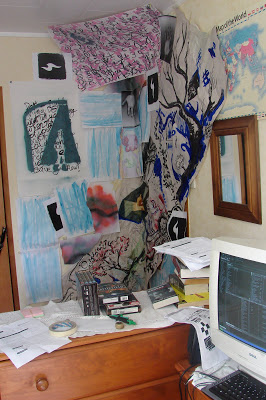 Ok so this is a personal accounting. I saw a sudden shift in climate! It was like a catastrophy I swear! One moment I’m baskin’ in the sun, and next moment clouds come along and start raining! If this wasn’t climate change then I don’t know what is! Something should be done about this!

Oh I know. Lets make a new tax to pay, but lets think of it as a donation to the planet. Oh hang on were already gonna do that? Ok.. So where’s the money going? You dunno? Me neither. I’m sure all the governments will get together, put their money in one big box and then throw it into that volcano on Hawaii where the Scientologist Aliens were genocided. Then We’ll offer up a prayer to mother nature to save us and get rid of our sinful CO2.
Hang on. Wasn’t the CO2 Levels higher in the last ice age? I thought we were gonna burn. I guess thats why we renamed it from global warming to climate change. Someone fucked up there I guess. Wow. the advertising was brilliant, I barely even noticed the shift in wording. 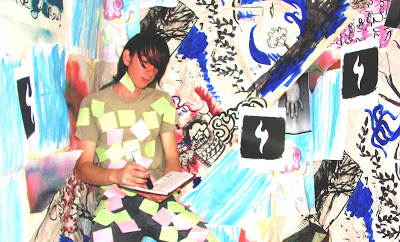 In other news I totally won the first cycle of Keirs Photo thingy. The theme was “A slice of heaven” the place where you go to have a bit of peace and be happy. So I chose my own head, or more specifically Drawing. So this is a physical Recreation of the inside of my head. Hectic images crashing together. The postit notes that are stuck to me are to help me blend with the background, or to show that I’m a part of it.
Breaking headline! From last night. Fun story, so I’ll tell it. If for nothing more than to catalogue odd experiences.
So I’m hanging out with my favourite married couple Matt and Keir. Were hanging out for a lot of the evening. And its about 1am or so and I’m thinking about leaving, but these two nutters are like, “God I’m hungry, Lets go to Wendies.” To the sadness of many we had to go to MCd’s instead. Matt’s not happy with them.
Were sitting at the drive through. Keir freaks out at all the sleeping birds in the tree’s above us. 20 minutes later we get to the window and their like, “We only take cash.” Were surprised by this “Wtf, You know we live in a cashless society now! Jeeze.”
Those weren’t Keirs exact words, but she voiced our reaction of “Why didn’t you have a sign up or something!”
So we go get cash, come back, get our food and shoot off to find a place to eat it. Now consequencly we park at the same carpark that the Creepy drug/sex crazed gay guy was from a few posts ago.
Matt likes this idea as much as he likes McDonalds. But were eating, steaming up those windows, when Keir suddenly freezes “Omg, theres someone coming towards the car!”
We see this big Maori boy out there. Matt winds his window down and the exchange words.
APPARENTLY his car broke down and he needs jumper leads. He also mentions casually that one of the windows is smashed in. He gets really insistent about us having jumper leads. He’s not a very good listener, and he has trouble understanding our most basic statements of “No unless someone magicaly snuck jumper leads into my boot, there’s nothing there.” We look anyway. And he doesnt understand that “YES. WE will go to gull and get you some leads if they let us.”
So we drive past where he’s parked his car. Its parked around in a particularly dark spot, with lots of bush in front and beside it. We get to gull.. And keep going. SCREW that. were not gonna be the next unwitting owners of a blunt object in the head. We go home. With our night ruined.
a few weeks later we read this post, and laughed.. Crazily.
Hey hold up. How can they tell us that the end is nigh because of global warming? They have trouble enough as it is predicting weather next week. Let alone twenty or thirty years from now. 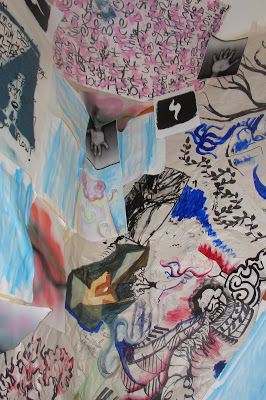