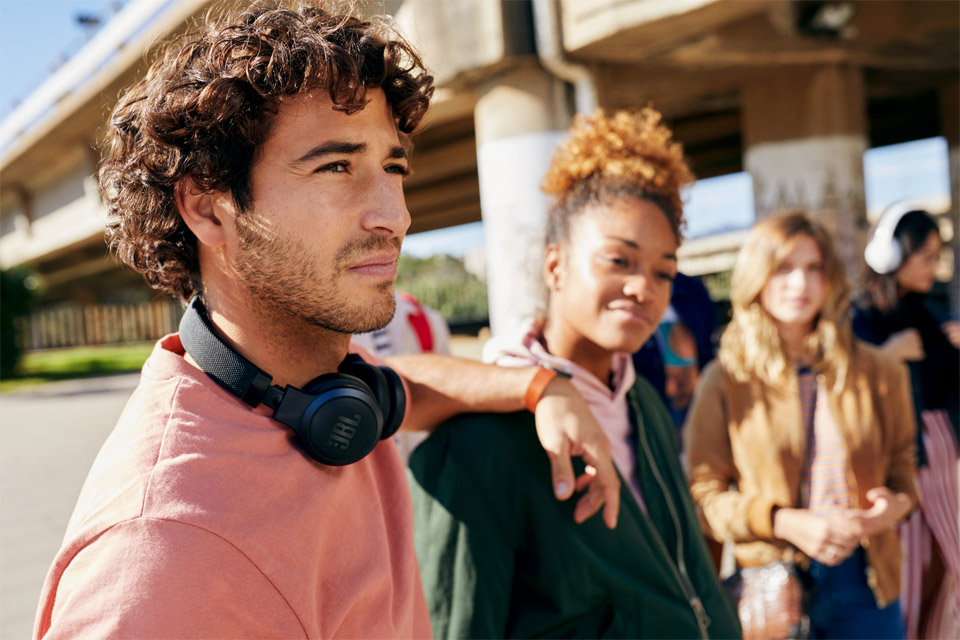 I haven’t reviewed headphones for quite a while so it was nice to reach out to JBL and snag a pair of its new Live 400BT cans. They’re pretty stocked with features for a mid-range set of ‘phones, so let’s dive in.

The 400BTs use 40mm drivers to deliver audio, which work very well. I like to listen to a range of music because I am very learned and cultured (/sarcasm) and the 400BTs did well to reproduce the rolling drum-and-bass lows of Tantrum Desire and the subtle nuances of the recently-remastered David Bowie classic, Rebel Rebel. I left my player’s EQ flat to see where the 400BTs stood in those terms and they’re good. I’d dial the mids down a tad but they’re hardly overpowering, and that’s a personal preference thing anyway.

I’m most impressed with how high-quality audio sounded in wireless mode. Audiophiles will get into a hot mess if someone tries to reason that Bluetooth is improving all the time and wireless sounds great now but that’s the truth of the matter. Switching back and forth from my wired Koss 4AA headphones, the only aural differences I could detect were in the EQ, the JBLs pushing more bass than the Koss’. Streaming from Spotify and loading up FLAC files sound the same, don’t @ me. A cable comes bundled if you want to go wired at any point.

The headband is covered in a high-quality, comfy fabric while the ear cups use a soft leather. I usually opt for over-ear headphones so it was quite alien feeling the cups press against my ears. For me and my fat head, they’re a little on the smaller side but my wife tried them on and said they felt fine. My ears started feeling squished after an hour or so of constant use. It pays to mention that any set of headphones will cause fatigue at some point but those with larger craniums might want to look at something like JBLs Live 650BTs. I’ll let you know how those go shortly.

Pairing is easy as, a couple of taps through your phone’s Bluetooth menu and a push of a button on the headphones and you’re done. The 400BTs have a cool mode that quietens down your music and routes outside audio into the headphones so you can hear people talking to you. This is especially handy when gaming and someone tries to talk to you. No more frantic flicking one ear off as you get destroyed by some sweaty nerd sitting too close to their computer, now you can get that kill and maintain a nice conversation in real life too.

A big caveat with wireless headphones is the charging requirement. I know a few people that opt for cabled ‘phones purely to avoid the irritating “low battery” chime and I can understand that. However, the 400BTs will last an incredibly long time between charges. The box says 24 hours but I got closer to a week of use out of them before they politely asked for a charge. For reference, I use them pretty much the whole time I’m at work, plus a bit at home. That’s roughly 10 hours per day. As I’m writing this, I’ve had them for about two weeks and I’ve still only charged them once.

However, all that good stuff comes at a price, $179.95 to be exact. I don’t doubt there are cheaper wireless options out there. But if your ears play nice with the smaller ear pads, you’ll be more than happy you spent the money because these things are simply awesome.

Nile Is IZScomic's resident console review guy. He works across a range of NZ media with credits in M2 magazine and Stuff.co.nz Media Contact: [email protected]