First Look Pictures of Alicia Vikander in Tomb Raider
How To Make Your Country Look Way Better at Overwatch Than It Really is
Uncategorised March 30, 2017
Share

I originally wrote this for the magazine, with our sponsor Under Armour in mind. They hooked me up with some clothes and a pair of high tech $200 shoes. This version differs slightly with the mention of rum.

Updating the firmware on your shoes doesn’t sound like the usual sort of pre-hike ritual you might undertake but that’s exactly what I found myself doing in my hotel in National Park the night before me and five mates were to tackle the Tongariro Crossing. 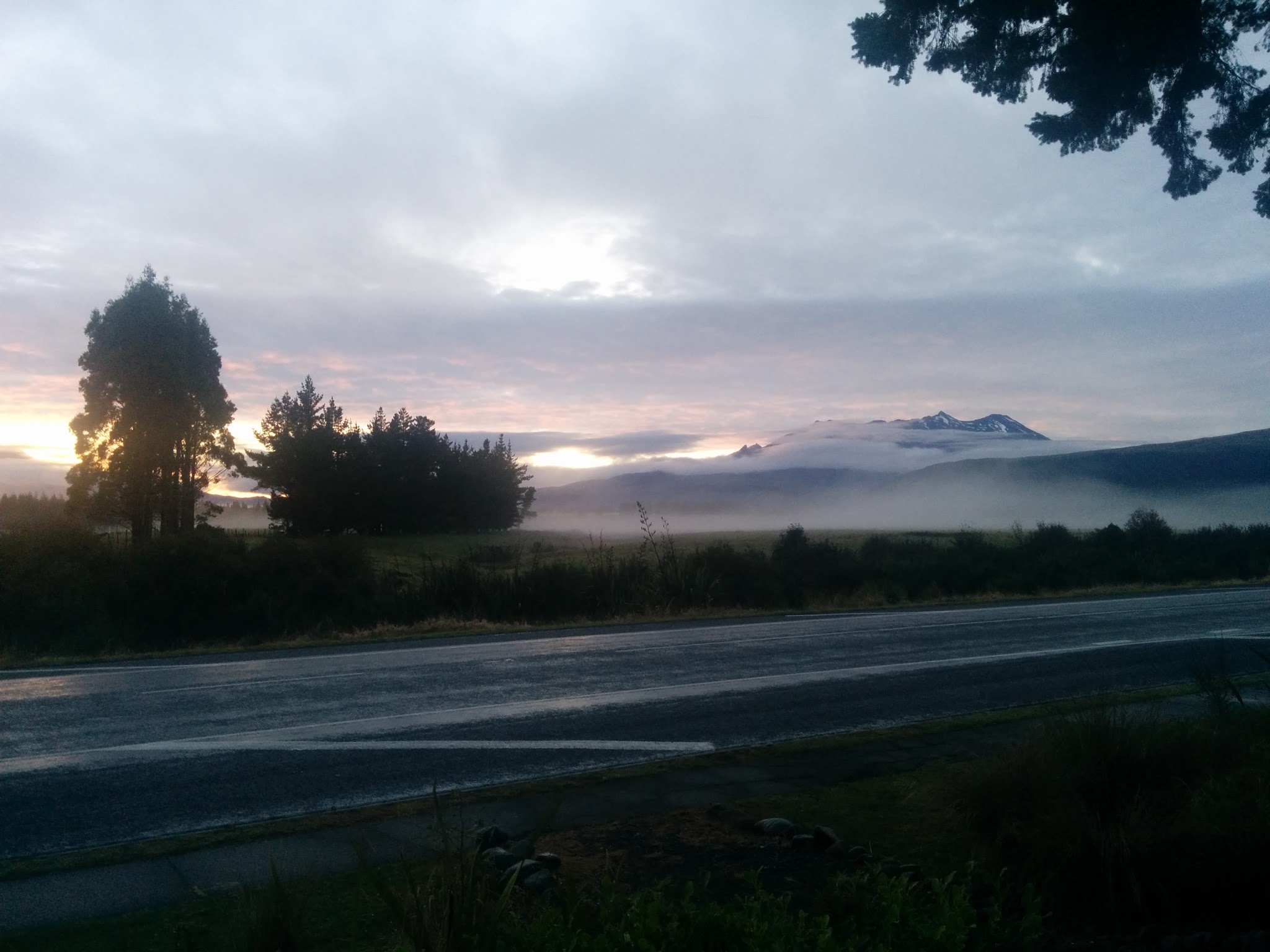 We were doing the track in mid-march, and the week before the upper North-Island had just been hit with massive downpours that had quite literally threatened Auckland’s water supply due to all the silt. You know the one. The weekend forecast looked like rain and we weren’t going to take any chances.

I’m 5.9” 69kg urban dweller who barely ever gets outside, but this was my stag-do so my cohorts and I decided to put in a little effort for a change. In terms of gear I had Under Armour shorts and t-shirt, perfect for all the sweating I was expecting to do, as well as a longsleeved under shirt and long johns. Scrogin, 3 litres of water, a backup rain jacket and a pair of UA Speedform Gemini 3 RE’s rounded out my gear.

We hit the track at Mangatepopo at 8am with the instructions that if we got to Ketetahi 19km away before our designated rendezvous time there would be an earlier bus at 2:45 that would take us home. Challenge accepted! Also another challenge accepted was the extra litre and a half of rum Matt my best man gave me to lug the whole way. 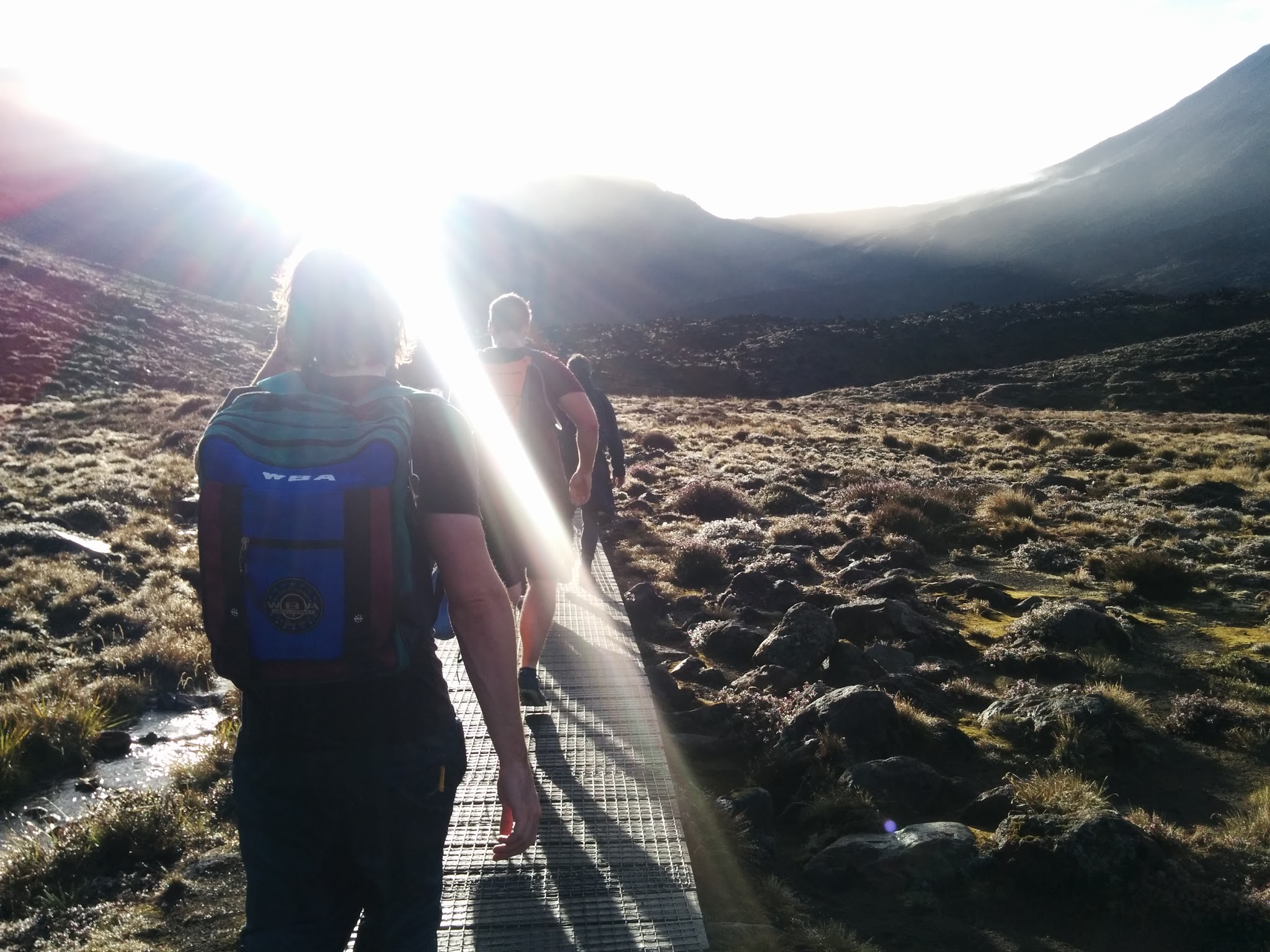 The first leg was a nice warm up with a gradual 250 metre rise. The true test is the sudden incline that was to follow from Soda Springs up 300 metres to the South Crater. A couple of the guys keeled over half way up and my future brother-in-law Jeff wondered whether he’d need the inhaler he hadn’t used since he was a kid.

Making our way across the plane of the south crater there’s a pool of water, which at a push could maybe be considered a lake, don’t bother detouring to it, speed across the flats and scramble up to the Red Crater instead and get amazing views of the desolation that stretches east toward the Desert Road. 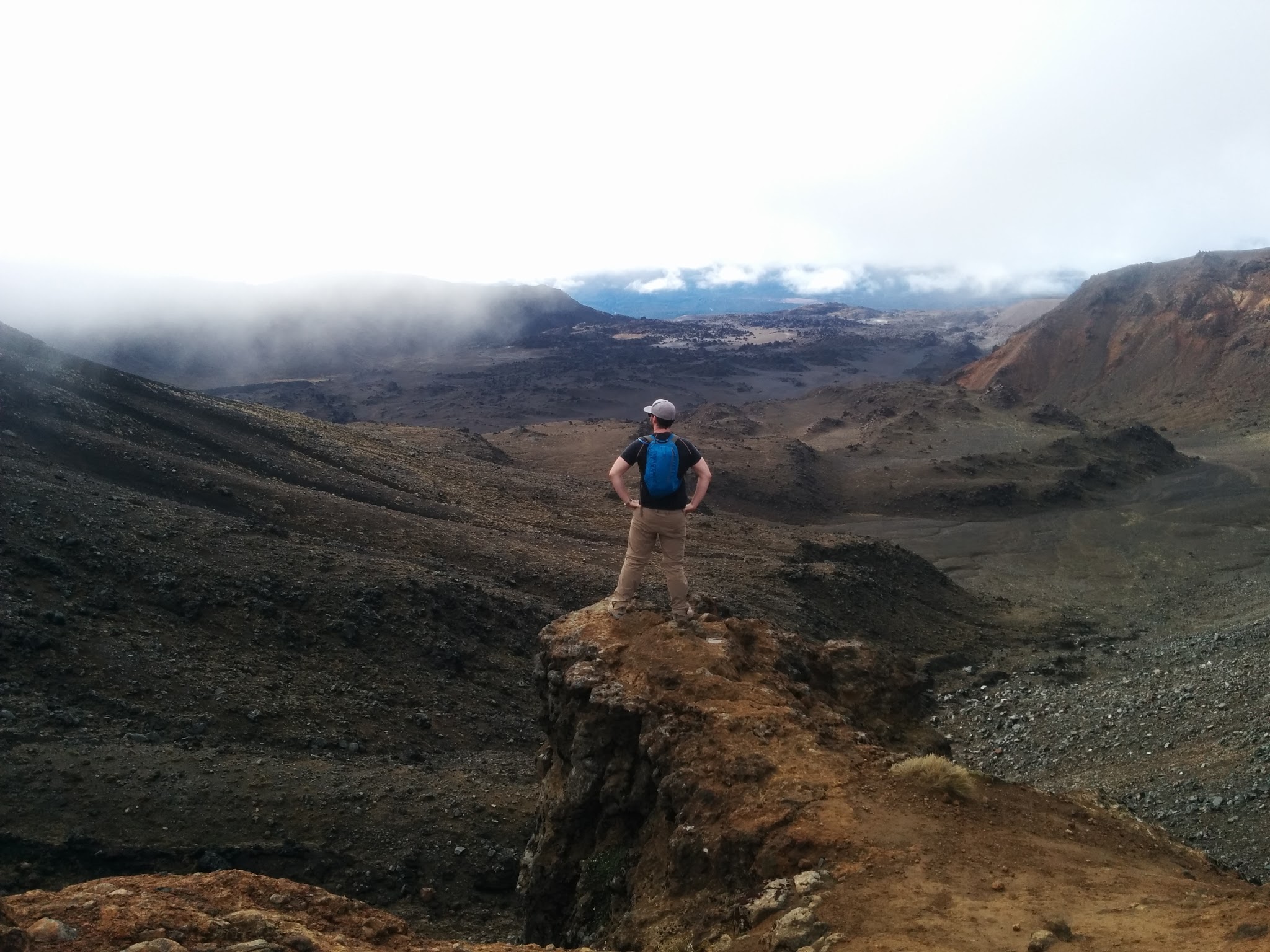 Further up we walk up into the clouds, which spritzes us with just enough water to keep our temperatures comfortable. So far the weather has been overcast, and without the sun beating down I’ve barely had to drink any of my water.

We had a choice to continue on to the peak of Ngauruhoe but decided that the extra two hours wasn’t worth the bragging rights, so we continued up another 100 metres to the aptly named Red Crater as it puffed sulphurous steam from it’s depths. It’s a spectacular view 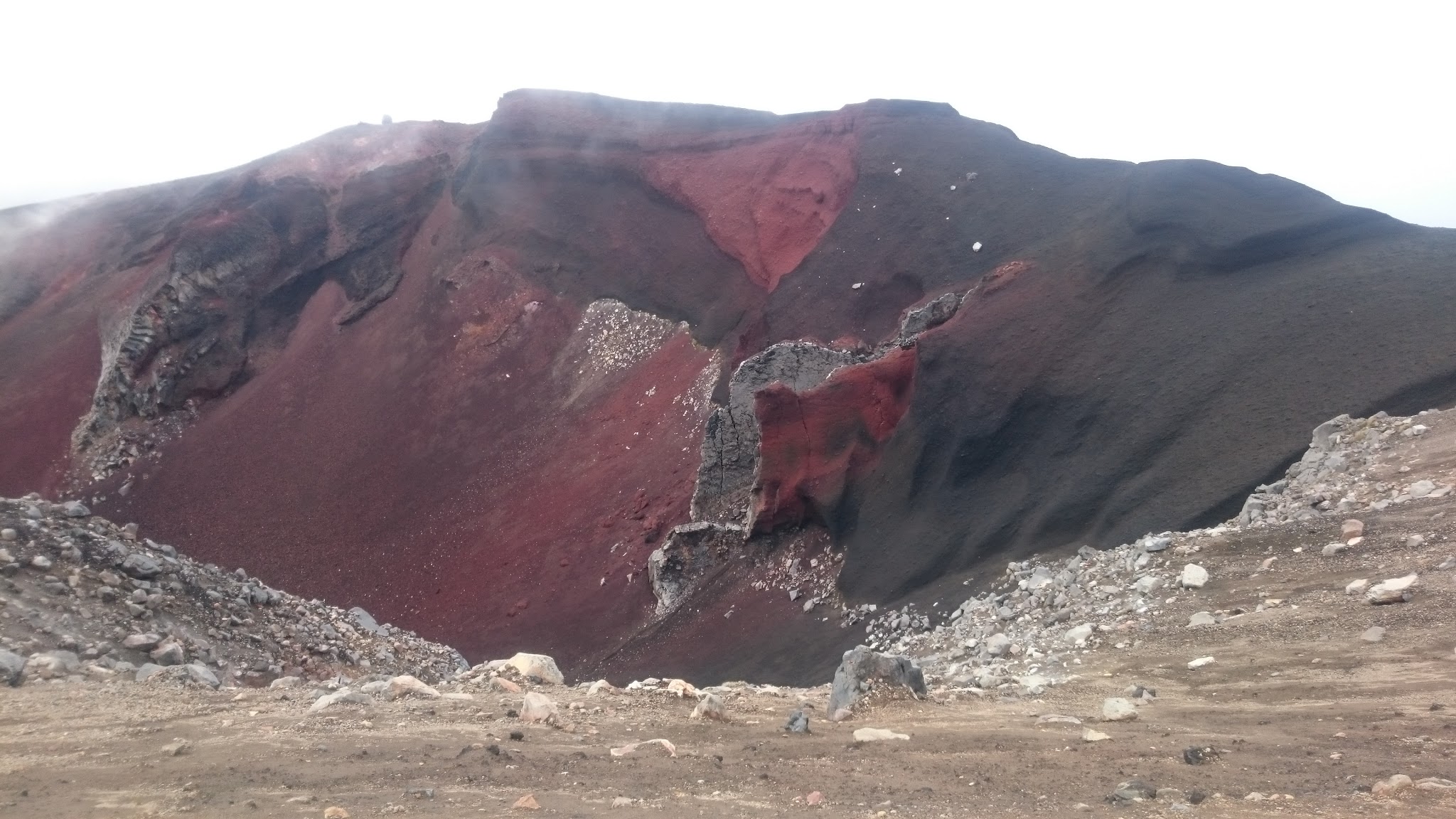 The downhill part came next and is comprised of mulched up grit. Eager tourists sprinted past us only to pinwheel their arms and suddenly introduce their butts to the ground. The bigger guys in our group had trouble with the downhill, while Jeff and I scrambled down toward the three Emerald Lakes. Groups cluster around these crystalline pools and snap selfies like crazy, or spread out and eat lunch before heading out on the next leg.

The lakes are the turn off point for the rest of the northern circuit, which is a three day hike interspersed with cabins. Maybe one day I’ll give it a crack, but not today. 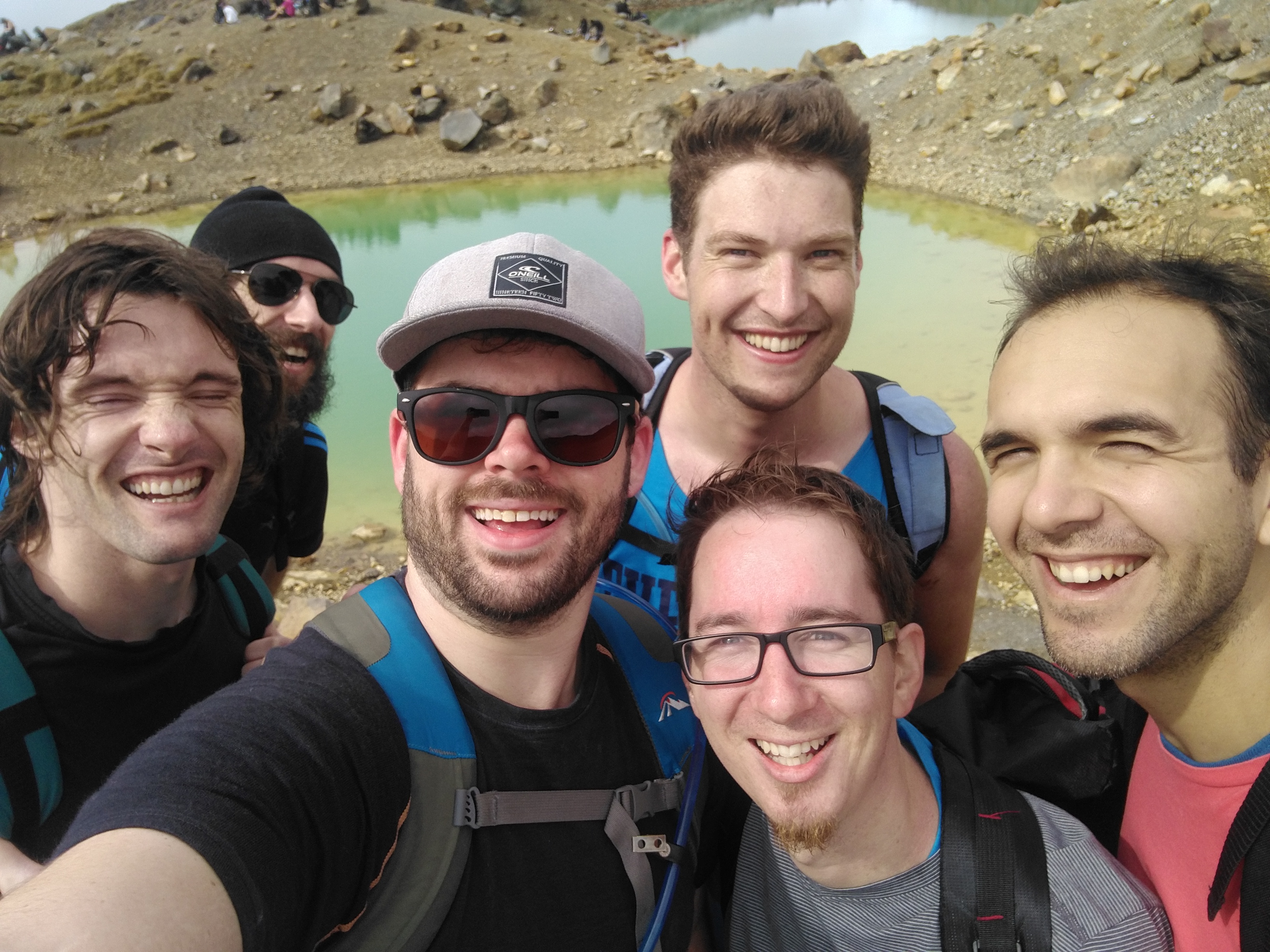 We hit the Blue Lake and turn left into the valley that winds its way to Ketetahi. A cool breeze blew through the valley and tussock start to sprout happily among the volcanic rocks. Prior to this there were precious few signs of life. But as we dropped 300 meters onto the outer slopes of Tongariro life started to literally buzz around us and the native bush slowly emerged around us.

The downhill was a blessing and a curse. By now we had decided there were two sorts of people in this world. Those who got destroyed going uphill, and those with gammy old man knees who couldn’t handle going downhill.

Before hitting the canopy of bush we were treated to a final expansive view north of Lake Rotoaira penned in by farm blocks and pine. Then we were in the bush, and we could have been anywhere in New Zealand. It felt just like I was just up the road from home somewhere in the Waitakere Ranges. 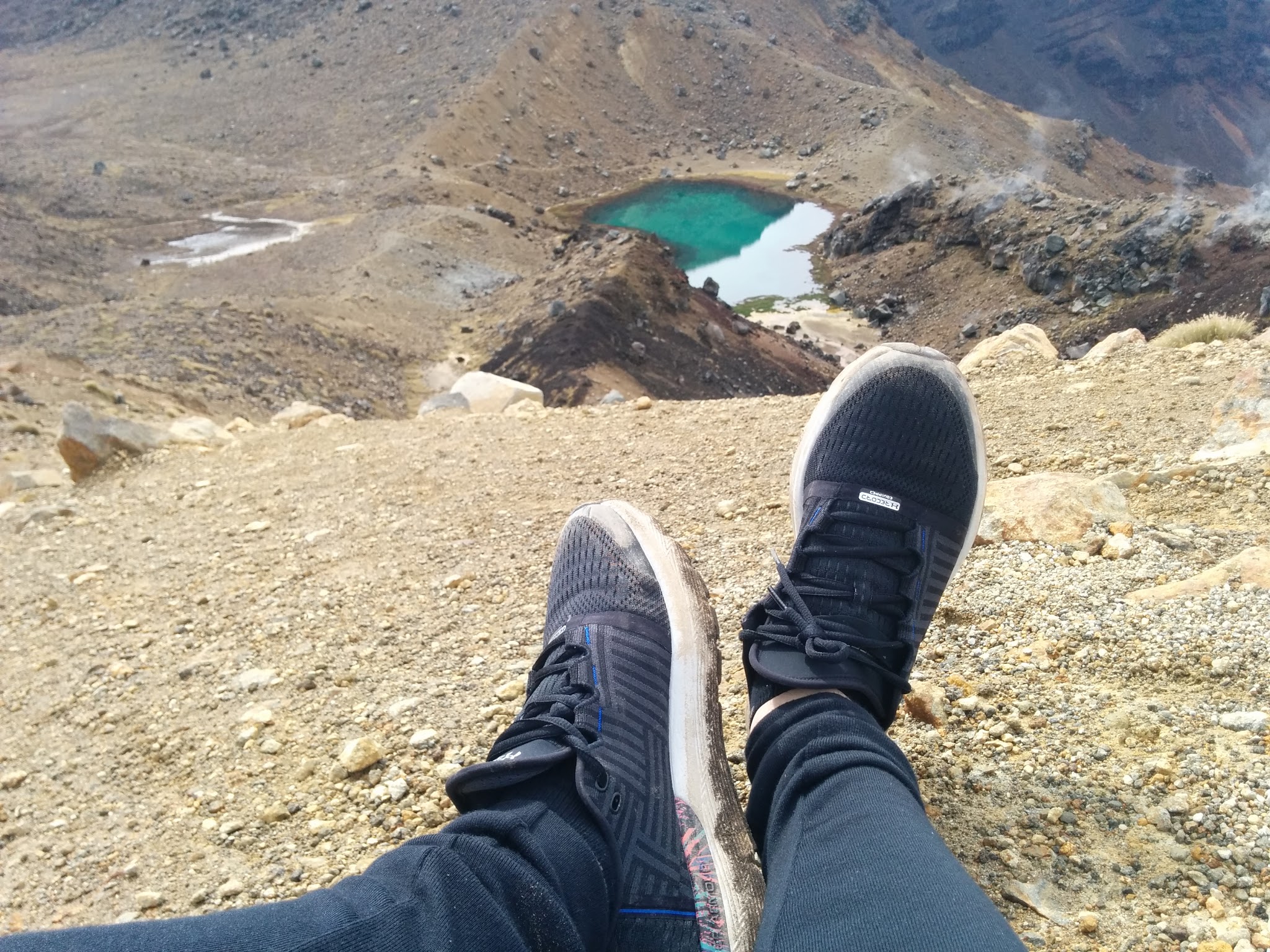 My gear held out well and my Under Armour set of clothes stood me in good stead. My pair of UA Speedform Gemini 3 RE’s were lighter than everyone else’s tramping boots and the only time I felt at a disadvantage was when I copped a shoeful of grit on my way down to the Emerald Lakes. The rest of the time I was impressed by their grip, often walking over slicked wet clay with no fear of natures reprisal.

We got to the end of the walk in about 6 hours, and after syncing my shoes to my phone it told me I had racked up over 30,000 steps in 20km.

Writing this now my muscles have stopped complaining and I’m thinking that I might be keen to give the Northern Circuit a go, but not before updating my firmware.