Blobby: Bear in the Woods
Blobby: Worth My Time
Uncategorised December 4, 2014
Share 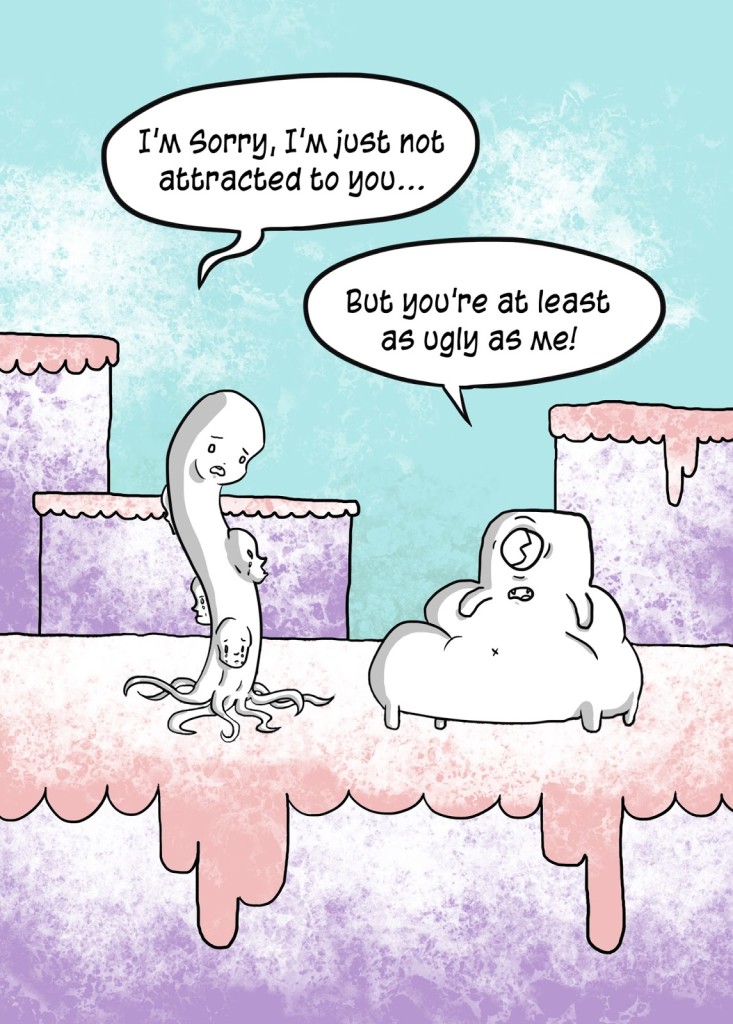 Crud, capital S in Sorry. Oh well. I’ll have to go back and fix that. So the dude on the left is Headtree, a character I made up back at uni during a boring lecture. I wrote his entire little story during the lecture as well. I thought I was so cool. He’s popped up occasionally in the blobby world to freak people out, but he’s harmless really.

So mum just told me a terrifying story just now. Every two weeks her and Dad go to Waiheke to fix up grandmas old place on Waiheke. The house is fairly isolated and backs on to native bush and vines. Randomly one night at about 10 a woman walks into the house. Mum stares at her. Dad stares at her. She stares at everyone else. Mums standing in the doorway to the lounge and says to the lady “Are you ok?” “I will be” the lady responds “when I get past you.”

The lady pushes past and goes through the lounge, round through the toilet for a while, then into the only bedroom and then back into the dining room.
Lets describe the lady a bit. Mid 40s. Nice businessy short hair, classy top. No shoes. No pants. Underwear where it should be. “Shapely legs”

They manage to shoo her out the door somehow and mum locks Dad outside with Pantless. Because apparently mum follows the pirate code or something. Dad was quietly trying to get back in but she was busy calling the neighbours to tell them to lock everything up.

Eventually the philanthropist parents of mine decide you can’t chuck someone outside with no pants on when they clearly have no idea where they are.

So they usher the lady back inside and give her a blanket. She huddles next to the fire. She doesn’t smell of alcohol, but how often do drugs ever smell like a silly thing like that?
Mum ‘n Dad try and pry information out of her bit by bit. The lady said she had a son “whose been 21 for a couple years now.”

Mum was a little nervous and laughed way to much at everything. The lady shot her a look at one point thinking mum was laughing at her and said “It could be worse. I could be totally naked.” which made mum laugh more.

Pantless mentions that she lived at “Number 20.” Which narrows it down to every single road. also someone had dropped her off here & that she had a bright red letterbox.
Apparently Mum ‘n Dad (MnD for short) have great letterbox memories and recalled that there was one up the road.

So they set off with torches in hand tailed by Pantless. They find the letterbox almost right next door. The two driveways look the same at night. Little narrow things on a moderate curve round the hill that cut down the bank & bush.

The next day Mum goes back to the house and the door is ajar, key in lock. No answer.
She went back the day after and Pantless came to the door, she didn’t look as good as she had that first night, hair a mess, dressing gown and pajamas on. Still sort of out of it.
“I’ve just come to pick something up.” mum managed to say.
“Ah yes, the chickens.” Pantless came out with.
“Uh, actually no, a fluffy pink blanket.”
“Right. I’ll go get it.” The lady stomped off before returning with the blanket, giving it to mum.
Then nothing. Pantless provides no explanation, NOTHING. No “I’m sorry I’m addicted to some crazy shit.” Nadda!

Anyway, the only reason mum brought that story up was because our car got rifled through last night. Looks like we left the door on it unlocked. They didn’t nick anything due to the fact the car is completely bare to begin with.
Remember kids, nowhere is safe. Live in fear always. Peace.