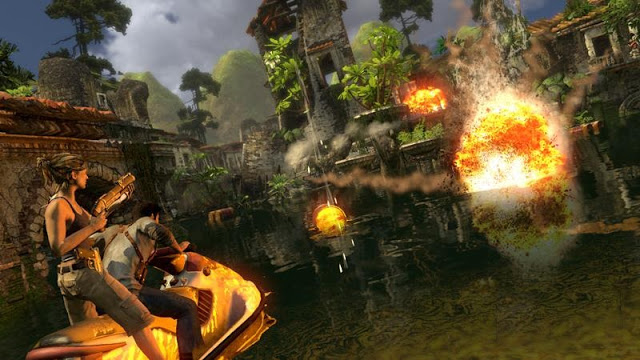 Unfortunately I can’t grab screenshots for these games since I have no idea how to do that sort of thing on PS3, and I have no intention on learning how any time soon. I’ve heard that the PS4 will be built around this one missing feature.

Anyway. Uncharted. Wow. The first game came across pretty standard but picked up quite nicely. I guess that’s what happens when you play a game 6 years after it was considered revolutionary. I have to say, I was rather surprised at how long they waited to spring the ghouly type guys on me. It came as rather a shock actually. Usually a game that decides to have anything like that blows its load early on. So I appreciate that this one waited till you were pretty sure all you’d be fighting would be regular dudes.
For the record, that boat scene pictured was a real bitch and I hated it. 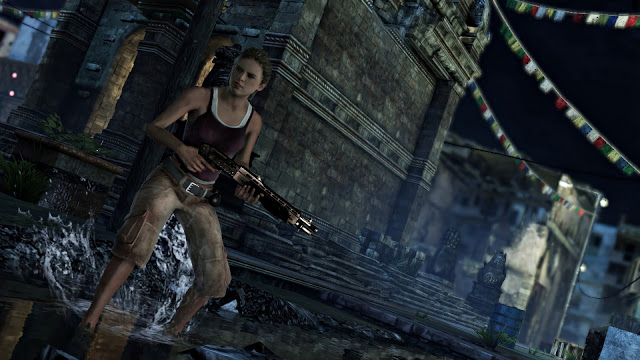 Uncharted 2 feels like it really ramps up the Cinematics, and for most fans this seems to be the big favourite of the series so far. It definitely has the strongest ending out of the three.
I super loved the train fight scene. It was amazingly well done. It’s surprising how they did the scenary wizzing by, at no point in time did it feel like they were looping anything, and you really felt like the train was getting somewhere as you fought your way along it.
The (by this game) obligatory ghouls also had a nice twist as well.
This is the game I remember putting down the most out of frustration. Usually some gay ass fight that I couldn’t do.
That was the one problem with these games. The chases are AMAZING. The puzzles are decent, the climbing around is well done, but the gun fights are boring. I turned the difficulty right down so I could breeze through them. I figured turning the difficulty down wouldn’t affect everything else I liked about the game. And besides, I’m a busy guy who has a life now. I have nothing to prove to anyone.
Putting a helmet on a guy shouldn’t make him impervious either, that’s just stink and unfair.
The second game also put a big emphasis on the love interest thing. Which I really dug. Elena is rad. It’s fine, Becky thinks Drake looks like Nathan Fillion so we all know what that means. 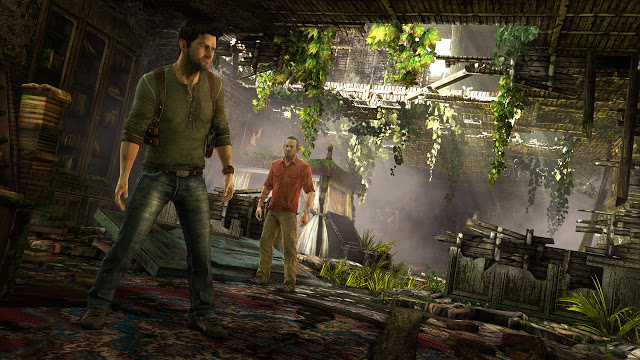 Due to the consequent digging of the Elena, I was rather horrified she wasn’t immediately showing up in the 3rd game. Instead I get lumped with this Australian bitch that appeared in the second game. No thanks. You can go get sacrificed or something. And another thing about Elena, they changed her eyes in this one. They used to go down a bit more at the edges, but they’ve sharpened them up now. Not entirely sure how I feel about that.
This game was awesome, and personally I enjoyed it more than all the others. Playing as young Drake was cool, and the bit with the plane… I might go and play that bit again. It was a great sequence.
And I’m glad that they didn’t make an “obligatory difficult annoying boss fight” because “It’s the end and that’s what you need to do because everyone does it.”
The funny thing about this game was the fact mum sat down a couple times to watch me play and was thoroughly engrossed by the experience. It’s perhaps the first time since Jungle Hunt she’s payed attention to a game before. She was interested in the story line and the visuals, not so much the firefights, which I agreed were pretty boring. By the end of it I actually heard her standing up for games as art, and as an interactive movie experience. “Like a Choose Your Own Adventure Book” she said.
I don’t know if I’d encourage her to watch me play The Last Of Us though. Indiana Jones is one thing, Zombies is another.
All in all. This is an amazing series of games, despite my misgivings with parts of it… Also the multiplayer element is a poo.
But the series as a whole has made my PS3 purchase worthwhile.