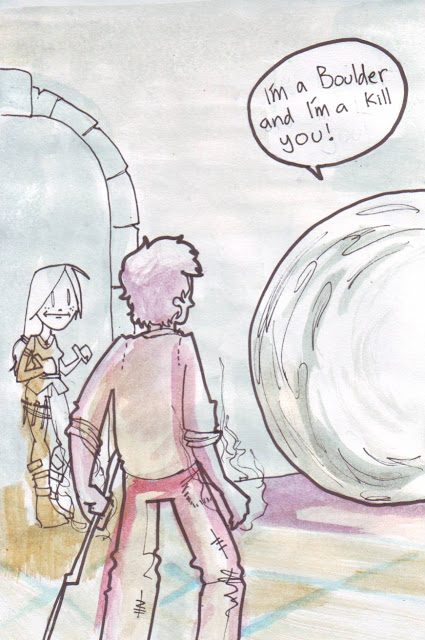 A quick illustration of a trap from a DnD 4th edition encounter entitled “Kobolds Hall”. I ran through it with my players, albeit with a different story line hook. In area 4 there is a bolder, and I stupidly decided to run it, even though I didn’t fully understand it. The boulder had the ability to go round corners somehow and squish all in its path (The squishing was no big deal). But its odd ability to just roll around and around was a bit of a imagination killer. Kobolds, fine, flying drakes, that’s ok as well. A boulder that seemed to be self powered, not so much.
It did provide some drama though. Puddle was stuck to the floor due to a Kobold slinger who could throw glue shots. The boulder was coming ominiously closer, insta-killing the drake and heading straight for Puddle. Greek ducked down the corridor to avoid stoney death, leaving the stuck Puddle to his own devices. He decided the best course of action was to shoot himself with a offensive spell that would push him a square. A square was all he needed. It was epic.