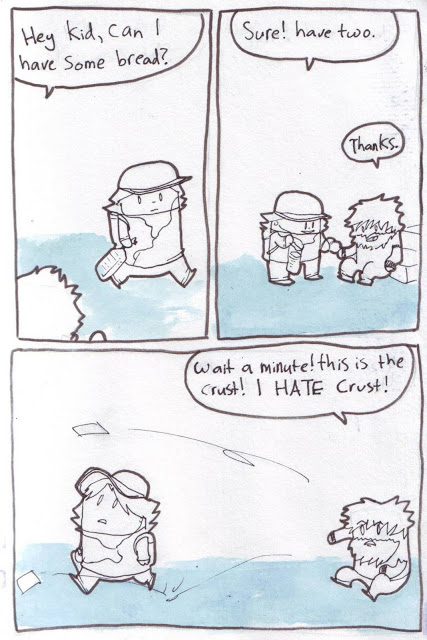 I was walking home with a loaf of bread. I happened to pass some guy that looked homeless (You never know he could be a king dressed as a scabby dirty old man). It got me thinking, thus the creation of this strip. I explained the idea to Becky, who was shocked that I would offer the crust away, rather than wanting to give him a nice soft bit. I was raised with the saying that Beggars can’t be choosers. So as far as I’m concerned the choosing is a job best left to me. And besides. We would have just taken it home, eaten the rest of the loaf, and left the two bits of crust for an obligatory amount of time till either mum caves and throws it out, or someone takes one for the team and eats it.
My posting has become sporadic of late, but rather than offer up a lame excuse and a promise of consistency, I will instead leave you with some more homegrown music to keep you entertained in the meantime. Sola Rosa is one of those projects that has something new to stick on your ear with each album. If you want a slightly more dancey version of this album go check out the Remixes.

0 Thoughts on Nobody Likes Crust