I know that the Japanese aren’t well known for sending dogs into outer space but I wanted to chuck their flag on the capsule as a way of celebrating Hayabusa2 successfully shooting an Asteroid to collect dust samples.

Nile brings us a full review and deep dive into Anthem. I haven’t given it another go since theVIP Weekend left a terrible taste in my mouth, but it looks like they may have cleaned that up a bit now? The question is, will it be enough. 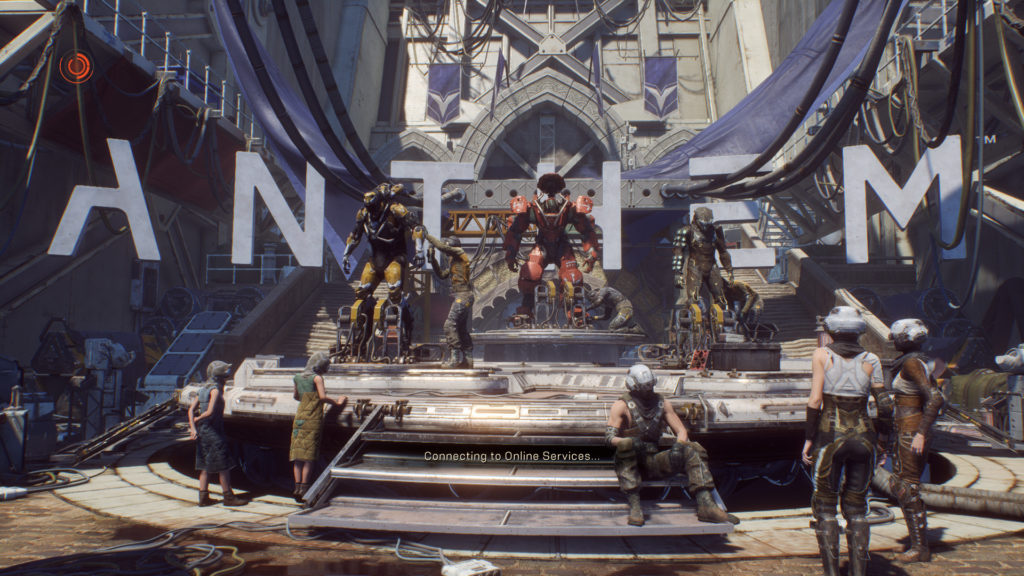 After a rocky VIP weekend and following open beta, Anthem is out in full. Here’s the quick and dirty of it all.

When the betas finished, I reached out to EA to see what state the game was in when we got our shot at it. I read somewhere a while back that one beta (Battlefield 4 perhaps?) used the same code as was on show at E3 several months prior so I wondered if Anthem did the same. I didn’t get a definite answer but the version available now to EA Access members and those who pre-ordered is about 400 per cent better.

It runs better and doesn’t crash nearly as much, which it really should given it runs on a version of Dice’s well-matured Frostbite 3 engine. Despite its ability to produce gorgeous graphics, it has been powering games since 2013’s Battlefield 4. BioWare looks to have worked a bit of their own magic on the engine too, as you’d expect.

Right off the bat, if there’s one part I had to pick from Anthem as my favourite, it would be how the visuals and sound are married. The designers and level developers deserve a raise because this game looks stunning. Every aspect of the visuals has had love and care lavished on it, to get the light refraction just right or the a leaf throwing the right amount of shadow. I could spend hours just exploring, something chief rival Destiny also pulled off well. There will be countless comparisons to Bungie’s sci-fi shooter online so I’ll try and avoid too many.

Then there’s how joyously satisfying the flight system is. Every time you launch off feels fucking brilliant, to be frank. Sprint, jump, boost and fire off into the skies. The crackle and snaps of the rocket systems engaging are enough to drop back to earth simply to launch again. A big part of Anthem’s appeal is the Iron Man role-play and this part, at least, is perfect. That said, overheating engines is annoying. Maybe during a mission it would be okay but during free roam I want to fly everywhere. Give me an afterburner and let that overheat but don’t force me to dive into a puddle or stomp around waiting for my jets to come back online. On the other hand, that means I get to sprint-jump-boost again…

Adding into that is the customisation of your suits. Changing the wear state of my javelin? Fuck yes. Giving me a bunch of textures to spend literally hours dissecting to find the precise right way to replicate various racing liveries? FUCK yes. Not making me pay for colour packs like Warframe but instead introducing an entire NPC to talk up microtransactions for other cosmetics? FU- wait, what? Yeah that’s a thing. Thankfully you can ignore him pretty easily. His name is Prospero, which I assume is what EA hopes to be next quarter.

His name is Prospero, which I assume is what EA hopes to be next quarter.

Broadening the graphics/sound connection is the voice acting and the characters. BioWare is almost always on the ball when it comes to this stuff and Anthem is no exception. It’s been a while since I’ve enjoyed in-game cutscenes like this. Owen, your main assistant at the start of the game, is a great character that injects a little bit of life and soul into the world.

The controls have had a rework since the last time we played, flight and swimming in particular being much more fluid. The first time I flew during the beta was a janky, frankly awful experience until I ditched the mouse entirely and used just the keyboard. Let’s not even discuss swimming. Now the mouse inputs are more fluid and slightly slower which has made flight much easier to control. I did, however, find myself bouncing off rocks and scaffolding during one mission when I was trying to revive a squadmate, unhelped by the darkness we were fighting in. It didn’t feel like a glitch, rather than an issue with me trying to flick the mouse faster, my character turning and the camera not pointing where I wanted it. Probably a fault with me rather than the game but irritating and easily repeatable nonetheless.

I do have a slight issue with the loot. There’s plenty of it, which makes for exciting moments during missions where you wonder what you’re gonna get but so much of it is the same gun with slightly altered stats. If you’re gonna do lots of loot, look at a game like Borderlands 2. There were – what was it – bazillions of guns? Most of them went straight into the garbage but they were all unique in some way. Even if two hand cannons look similar, one might inflict huge amounts of physical damage while the other could be all about the elemental damage. Anthem just needs one more variable in the guns and it would be great. It gets better when you move into rare and legendary loot but even then the guns still stay more or less the same. Right now it’s objectively more fun to bombard the enemy with your abilities and use the guns in the interim. 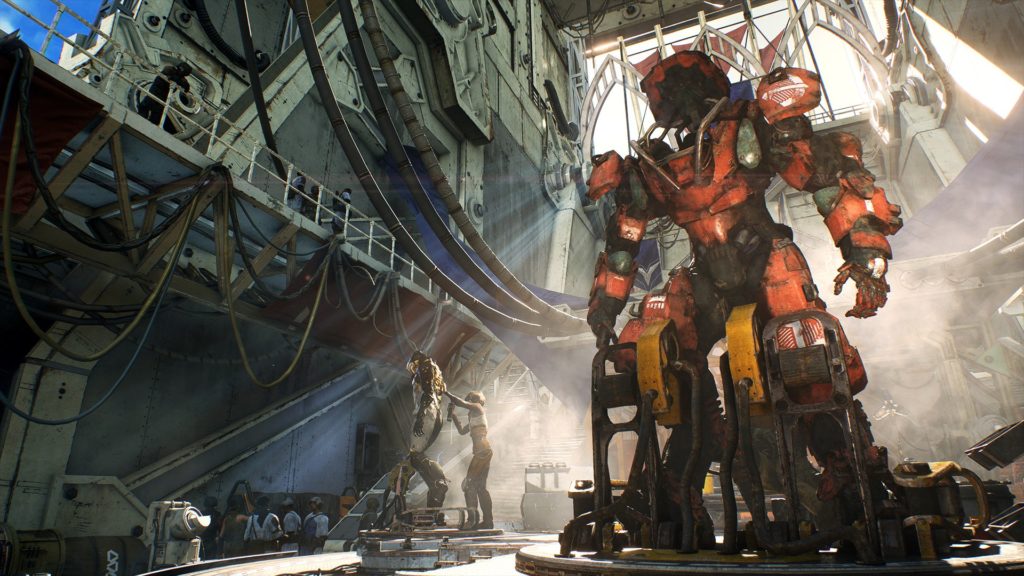 Destiny had a similar problem but at the other end of the scale – I remember grinding for the Mida Multi Tool and Mida Mini Tool in Destiny 2, then not bothering going for new guns for about two years.

I don’t really know what some terms mean though. Sometimes you’ll execute an ability and COMBO will flash up. How did I do that? How do I do it again? Who knows. Perhaps there’s a sub-sub-menu that tells me but I don’t really want to dig through those to find what looks to be a big part of combat.

The big thing, though, is the always-online-shared-shooter aspect. It’s a tough nugget to crack – Bungie took two goes and even Destiny 2 isn’t perfect, requiring a bunch of post-launch DLC to satisfy the critics.

Unfortunately, BioWare hasn’t pulled it off either. The studio is known for creating amazingly diverse universes and blending those stories with matchmaking and lobbies and connections just doesn’t work very well. Sorry. It just feels a bit haphazard in execution.

Then there are the NPCs and the story-bending aspect you’d expect from BioWare. In the past you’d get a conversation wheel that could set off a whole subplot or make a friend an enemy or an enemy a lover. You get the idea, you’ve played Mass Effect before. Right?

In Anthem, though, you sometimes get the chance to pick one of two dialogue options that don’t really seem to do much. I get there are time constraints but this is BioWare!

Missions in Anthem are fairly repetitive too. It usually consists of flying from place to place, kill baddies, scan a thing, go somewhere else, kill a bigger baddie, hope you collected all the loot. It’s fun but I hope BioWare adds some different stuff in the future, like exclusively flight-based missions or missions that require multiple types of Javelins to do well. I bring up that last point because Storm is by far the best Javelin right now. It gets screen-filling magical attacks involving lightning, fire and ice, a longer flight time, and a bonus shield. Ranger gets grenades.

Right before I finalised this review, EA sent me an email detailing a bunch of changes ahead of launch. In light of this I pushed my review back to have a look at the changes. 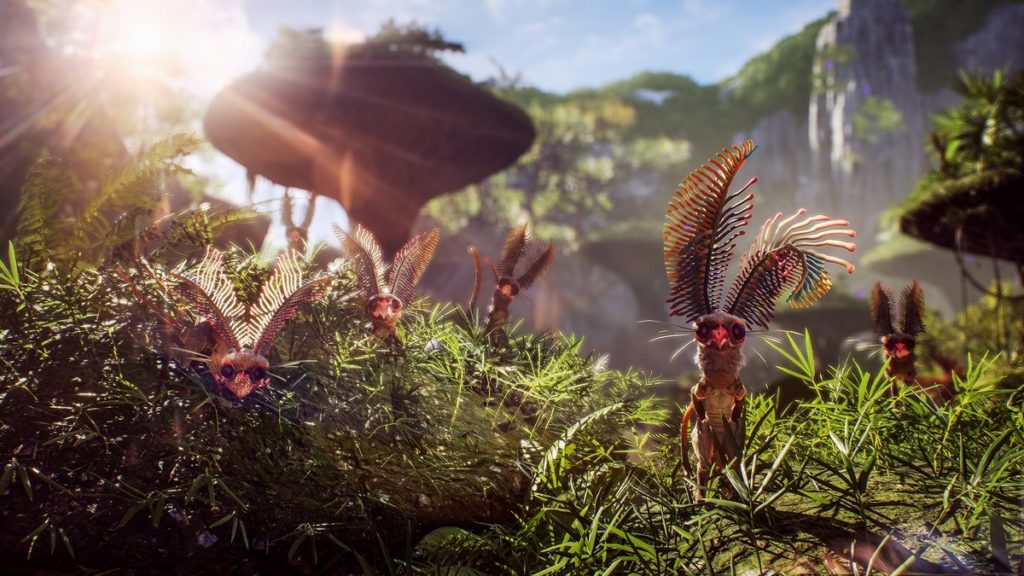 The list of fixes is quite long but two things that stood out were improved loading times and the fixing of many infinite loading screens. I can confirm that while load times are still somewhat slow (albeit on an old mechanical hard drive) they are improved and I haven’t experienced any more infinite load screens. Nice job, team.

However there is one related issue that might just end up being a quirk of the game, and that is load screens. There are far too many individual load screens in Anthem. Any time the game has to change where it is or what it’s doing, it needs to load itself again. Start mission, load mission, complete mission, load end-screen, load where you want to go, remember you have a bunch of new stuff to look at, load the Forge, look at guns, load Fort Tarsis, select mission, rinse and repeat. It’s agony.

But the one overarching problem with Anthem isn’t even to do with Anthem itself. Right now gamers are completely spoilt in terms of quality games. Want hectic first-person-shooter multiplayer? Battlefield or Call of Duty are there. Like a bit of Battle Royale? Apex Legends or Fortnite, step this way. A gripping single player experience? Metro Exodus (review coming soon). And that’s just off the top of my head, not including the zillions of older games that are worth replaying… like Mass Effect 2.

Right now, the biggest enemy of a game is time. There are only so many hours a day we have to actually play these games, so any new release has to be nothing short of amazing to win those hours. For me, Apex Legends is the player to beat. It’s another EA title, so good job EA, and it’s brilliant. Do I have time for a gorgeous, yet flawed sci-fi shooter? I don’t know. On one hand, yes. I love the premise, the flight and the Javelins are awesome, and I’m very excited to see what’s coming up. But I’m less inclined knowing my friends are all playing other games, and social gaming is such a big part of Anthem – and probably what will be its downfall.

0 Thoughts on The Humane Thing to Do