We had a kick ass time at Overload on Saturday! We met up with a lot of cool peeps, including Deadfacecomics who’s absolutely killing it on Insta, Li Chen, and Gregor. I’d tell you to follow their comics, buuuut I think you probably already do. I was a mess on the morning but fortunately Pepper Raccoon carried my sorry ass and helped make the stand look amazing. I should probably stop name dropping, but D.Va was there.

Below I have a new review from Nile for Forza Horizon 4. I didn’t introduce Nile his last review so maybe I should now. He’s a devilishly handsome white guy who looks like an iteration of me. We’ve worked together in a professional sort of way a year or two back… Whenever Pokemon Go was a thing. He sucks at Yugioh aaaand is a motoring editor now I think. I dunno. Maybe I should have asked him what he even does as a day job before bringing him on as a reviewer for IZS. 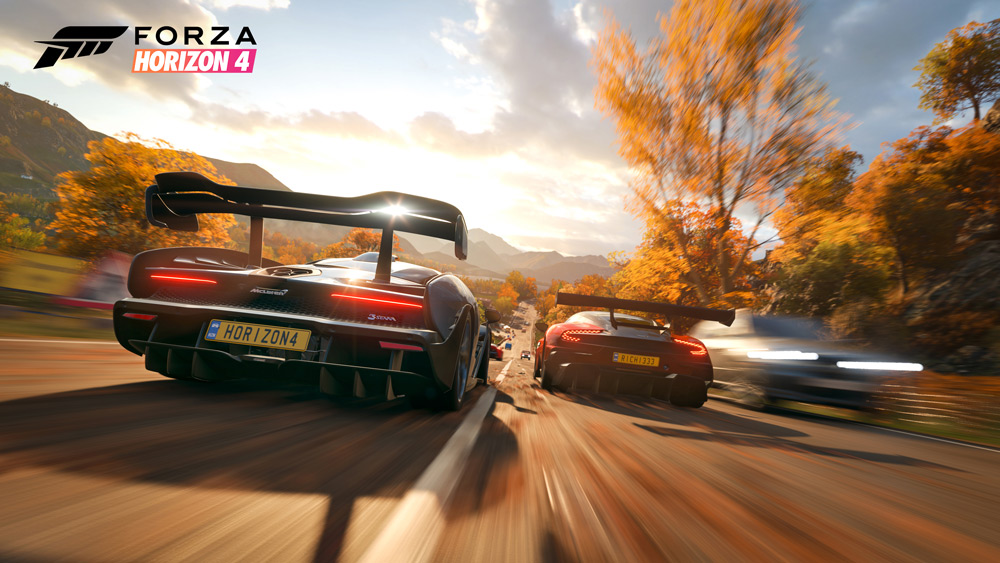 I’m a big fan of racing games. My first console was an original Playstation bundled with Need for Speed 3, and since then racing games have always occupied a place of pride in my games collection. Fast forward to 2016 and I branched into the world of Xbox, and with it, Forza. Specifically, Horizon 3. Yeah, yeah, late to the party, whatever.

I loved it. H3 took every great car-related “if you had ten grand/a hundred grand/infinity money…” question and blended it with beautiful graphics, a driving experience that erred towards arcade handling but with enough simulator-level physics to keep you on your toes, and a massive car selection. So, naturally, Horizon 4 was on my horizon. I’ll see my way out.

On PC, the game is 64 gigs, so it’s not really a “download and play in the same night” title. At least, not for me (VDSL wut wut). Clicking play launches a splash screen followed by the familiar Playground/Turn 10 studio intros, then you’re orbiting a cruising McLaren Senna, arguably one of the most bonkers hypercars to grace this planet. Seasons change around the car, one of the big selling points of the game. While H3 and other Forza titles are undoubtedly pretty, H4 has to deal with four times the amount of prettiness. Hence the big download, presumably. 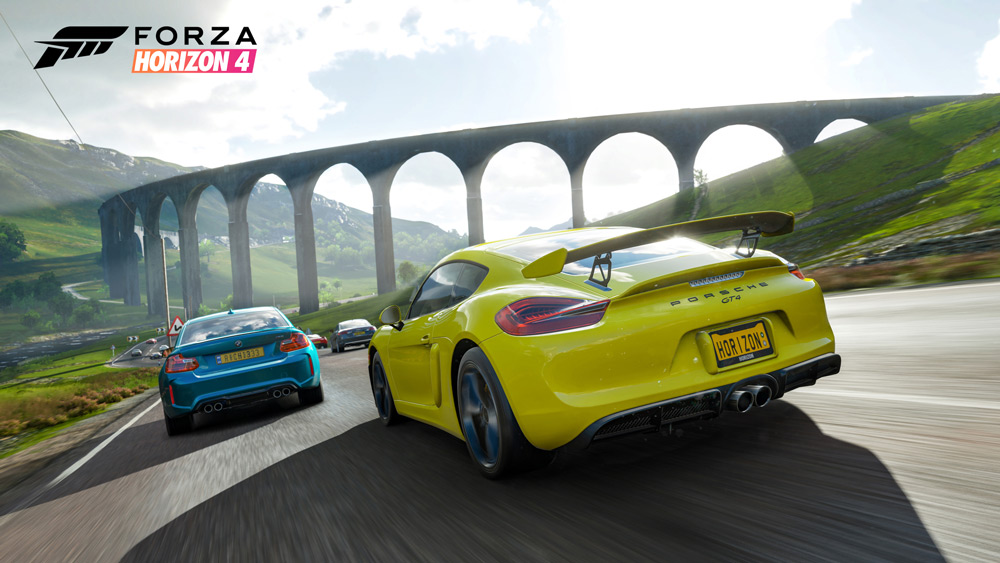 On that, the game doesn’t falter but neither does it really leap forward. From the looks of it, H4 uses the same engine as H3, reskinned. That’s far from a bad thing but it does look ever so slightly dated now. I was running the game on Ultra with its dynamic graphics altering setting enabled, which subtly tweaks fidelity if frames drop too much. So far I’ve lived through summer, autumn, and winter, and autumn definitely looks the best. You all know what autumn looks like, so I don’t need to describe the seven different hues of orange the leaves turn into when flying past in your clapped-out Ferrari.

This also means you have to consider when you do certain races. Each race earns a certain amount of points toward the next season, so if you love your road races, you’ll want to try and time them for the warmer seasons. At the same time, cross country races get a lot more fun in the snow and wet. During Prologue Summer, you are not yet connected to a shared world experience, however once you reach Autumn and complete a race, you will connect to Horizon Life servers and the cloud-controlled Drivatar AI in your world will be replaced with real players.

Gameplay is largely the same as 3, with the goal to expand the Horizon Festival across the patch of Britain the game is set on. You’ve got myriad options of racing, including road, dirt and cross country, each requiring a different car and a slightly different skillset. However, I don’t think the Horizon series is about clocking the campaign. It’s about harnessing the inner car nerd and letting it free, allowing to explore those wonderful ‘what if’ scenarios. 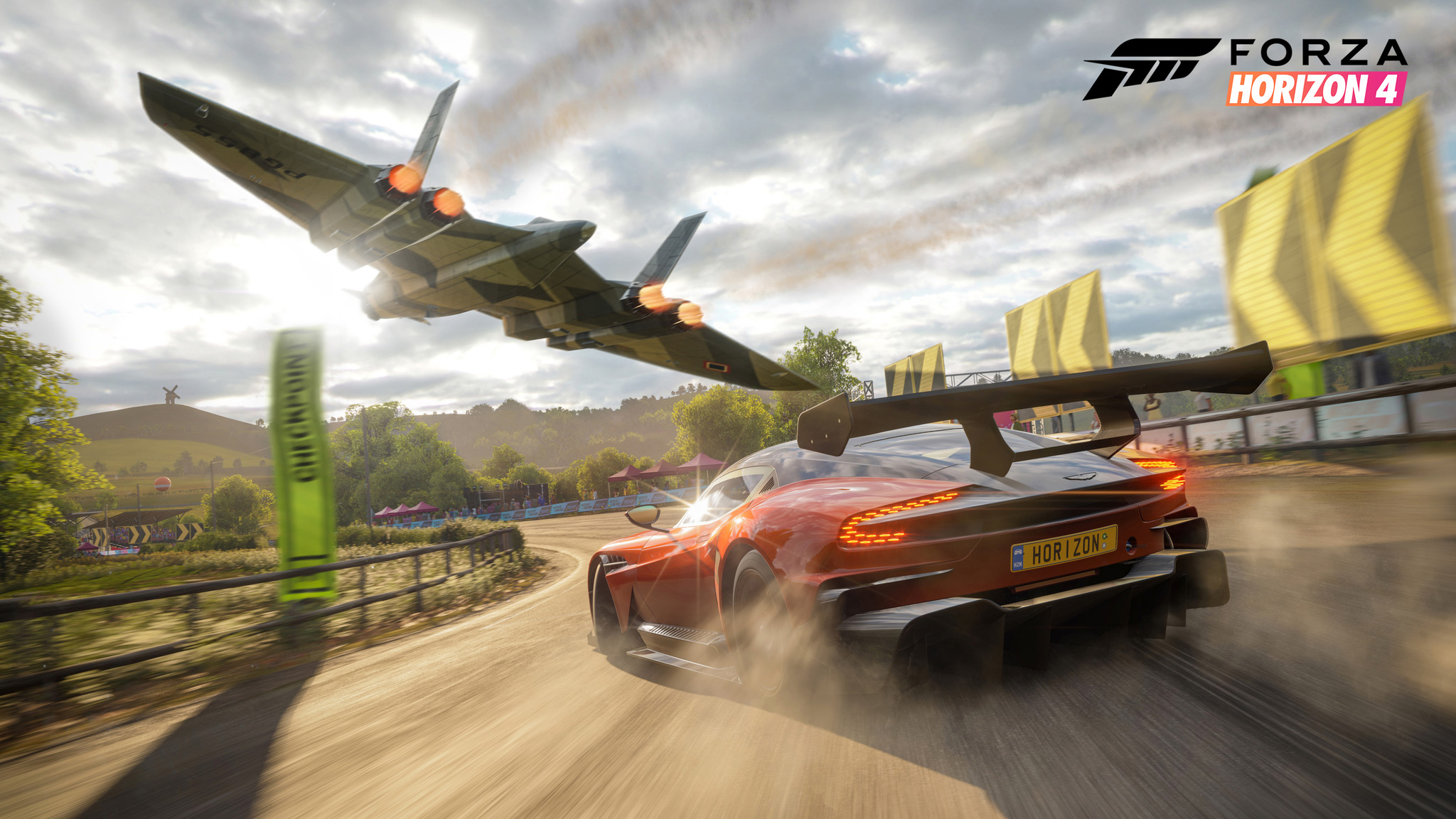 There are different car classes relating to how fast the car is, from D to S1. While it’s tempting to just slap the best upgrade on your car and call it a day, chances are you’ll be hitting more trees than apexes. I’ve found more fun in building cars to a certain class, then diving into Horizon’s extensive tuning settings.

However, that’s a Horizon thing, not a Horizon 4 thing. After a solid afternoon playing, the game just feels like more Horizon. As I mentioned earlier, that isn’t a bad thing but close to two years of development would suggest more. I have also encountered a few major bugs, namely crashing during startup. That said, I’m playing an early access version with a day one patch scheduled.

Overall? Well, it’s Horizon. It’s a festival, a celebration, a party with over 450 cars attending. It’s a brilliant formula, and despite similarities with earlier entries into the franchise, it hasn’t gone stale yet. Far from it.

0 Thoughts on My Heart