Juliet Starling - Lollipop Chainsaw
Hitomi - Dead Or Alive 5
Uncategorised June 1, 2014
Share
So it’s Amiga Day today apparently. I was wondering where these arbitrary days came from, and I guess we now know. It was International Hamburger day last week and I celebrated that as well.
The 31 of May is Jay Miner’s birthday. He’s attributed as being the chip designer and father of the Amiga. He’s also responsible for the Atari 2600, which he did prior to ditching Atari and doing his own thing with a bunch of other ex-Atari people.
Amiga itself was a project codenamed Lorraine, later renamed to Amiga, the female version of Amigo. Unfortunately there were funding issues and ghosts of Atari holding them back so they did what you do when you want to piss off Atari, get bought out by Commodore. Some found this just as bad.
Amiga sounds like the sort of thing I’d use if I was rocking around back in the day. It was popular for creative software and came at a price people could actually afford. The sound chip on it blew other PC sound cards out of the water for its time. A lot of Pokemon Gold & Silvers music was created using one. 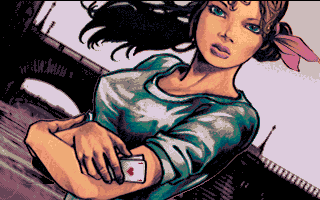 Anyway lets get to the girls of Amiga. There weren’t a lot from the cursory glance I made but lets start with Teenage Queen. This is probably the most attractive pixel art I’ve seen from this period. As you’l see from the pictures that follow, this ones relatively human. It’s basically strip poker. Not even basically, actually. it seemed to be a genre that really pervaded all the gaming systems. When you win the game she takes off her skin and reveals her robot anatomy. I’m not even kidding. The colours look pretty damn good on the Amiga. They look positively gross on everything else. The artist was Jocelyn Valais who hasn’t really done anything else of note since. Kinda sad really. 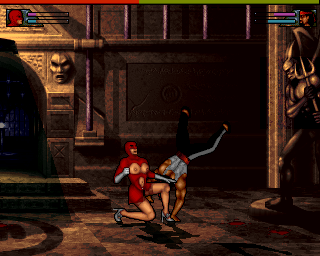 Next up is Capital Punishment. A gross looking Mortal Kombat sort of game. The fighting moves have been described as “frankly bizarre” and the entire game as the “WORST beat’em up ever..”
The game was developed by a team from Belgrade called ClickBOOM. They’d be more well known for porting MYST and Quake for the Amiga. I’m kind of suprised the company is still around. Good on them I guess. The character pictured is called Demona. She’s about to sucker punch the goofball doing a handstand. She almost looks like the Daredevil in drag. 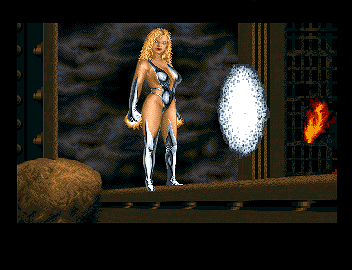 This game here is Entity. I could show you a picture of Anthemis (for that is her name) looking more normal. But I think her tiny little legs are hilarious. This game seems to universally have problems with her proportions. The best part of the game seems to be the cover art, which features her shooting a T-Rex with her laser hands. I found this goofy old review of the game which is all kinds of strange. “I had to fight the monsters controlled by the Entity wearing less foil than your mother wraps around the Christmas Turkey!” =S. I’m just gonna leave this one. It’s too odd. 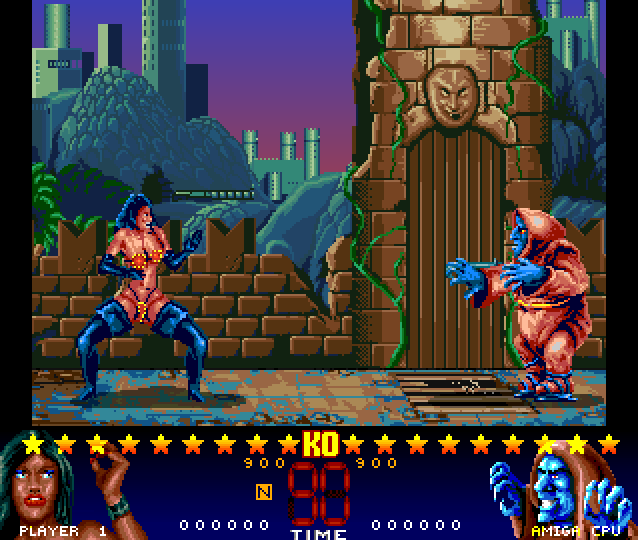 Last up is Dangerous Streets. Look at those teeth. Look at those teeth. And that profile in the bottom left. I think the streets are dangerous because people are fighting in them. Street Fighting. It’s like they’re all Street Fighters. This game might actually be worse than Capital Punishment if this review is to be believed. It’s like Zero Punctuation before the internet existed. 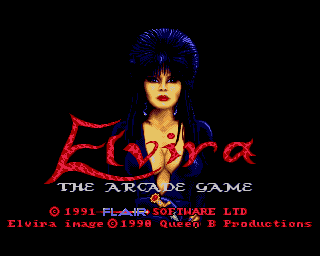 Elvira: Mistress of the Dark is gonna get a special mention, I consider it more of a TV tie in than an original game concept.
I don’t know if I celebrated Omega or just sort of sullied it by dragging out these skeletons. I can’t find any characters that should be added to the pantheon of 8Bit Girls. If you know of any please drop a comment.