There are two figures which walk the Silent Wheatfields. One is tall, lithe and graceful, and carries an ice rimed scythe. You know this one already.

The other is the Shovelman.

He carries a large sack over his left shoulder and hunches as if under a burden, though the sack wafts airily in the dry breeze. In his right hand, of course, he holds a shovel.

The Reaper wields her scythe with the casual care of an old lover, leaving once proud wheat lying low in its wake. Close behind follows the Shovelman, scooping the wheat into his ever wafting sack. This is the way it always is. But one time it wasn’t.

One time, the wheat refused to fall. The Shovelman watched in dismay as the scythe swung harmless through the stalks; as, with each sweep, the Reaper’s granitic face shifted minutely to harbour an awesome, quiet rage. Then she stopped, standing perfectly still.

And with one, two steps she receded into the distance and was gone. 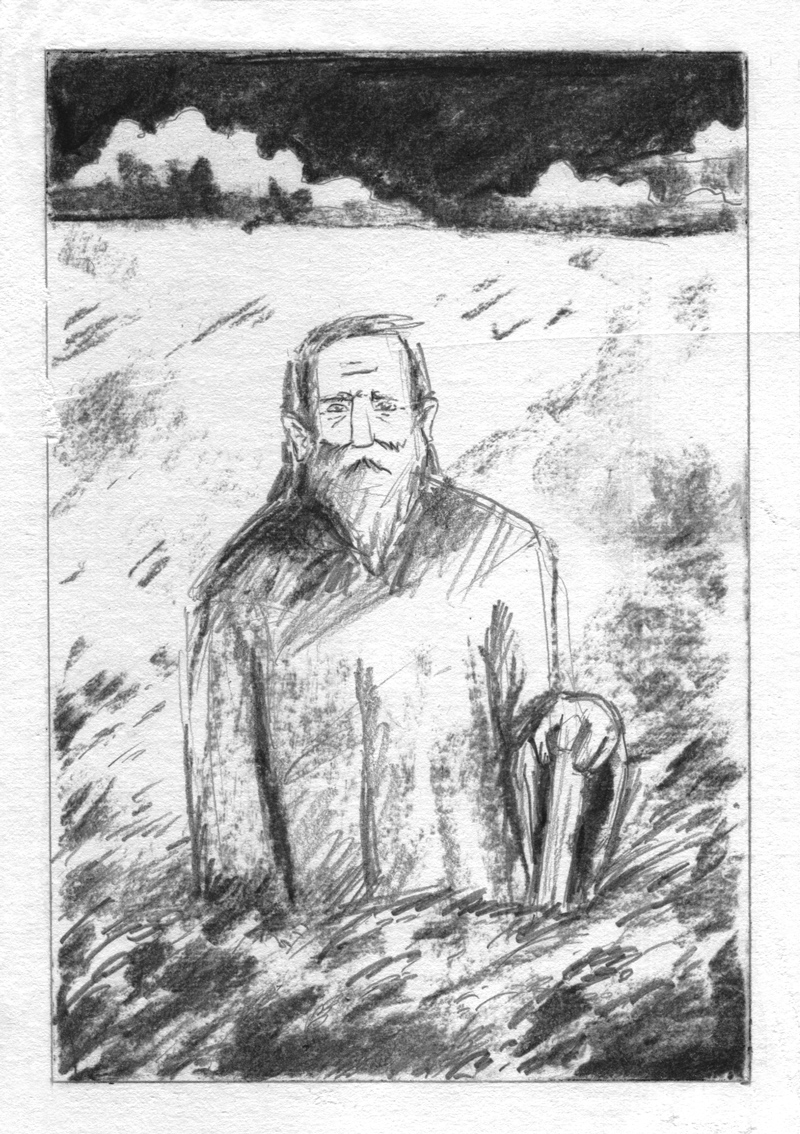 For the first time, the Shovelman was alone, and without purpose. There was no more wheat to gather, so he walked to the edge of the fields, lay his head down on the half full sack and slept as was his custom. Whenever the Shovelman slept, he would cry till his tears soaked the sack and dissolved all the wheat of the day, for he loved the Reaper more than his shovel and sack and the endless black sky, but she did not love him.

When the Shovelman rose from his sleep, the Reaper was not there. He went to the fields and looked out over the waving wheat. He wished the stalks to fall, he wished a scythe instead of his dull shovel but most of all he wished the Reaper to return. The Shovelman stood, small under the empty sky, forever and again but still the wheat waved, his shovel kept its shape and the Reaper did not appear. Springing suddenly forward he swung at the stalks with his shovel and as they bowed away he struck harder and faster in a frenzy. When at last he stilled, the fields wafted unchanged before him, as if he had never been there. 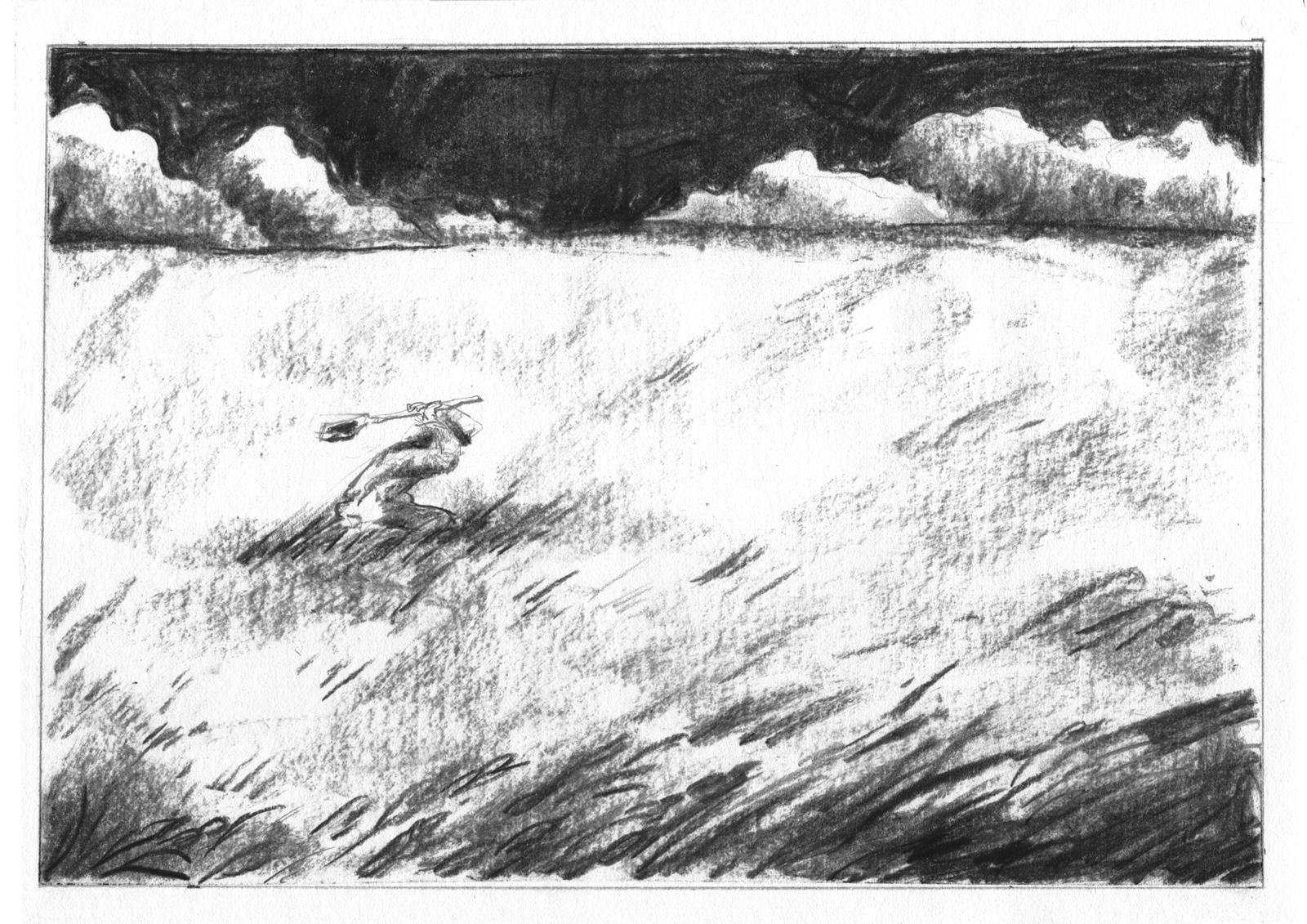 At this, the Shovelman began to weep, great gouts of water pouring from his face and filling the fields. The tears rose first to his ankles, floating the empty sack, then to his waist, half sinking the shovel, then to his heart, spreading a deadweight cold. But just when he thought the tears would cover his head and stop his sorrow forever, he saw movement across the waters. And with one, two steps she passed through the flood to his side.

“Do you know what you have done, Shovelman? A god tried to end my work for his perfect garden and I could do nothing to stop him. The world turned bright and brittle, ready to snap, but still he wouldn’t listen. Then one day creatures started to rot alive, decaying without death. Only then did the god relent, giving up his garden.” 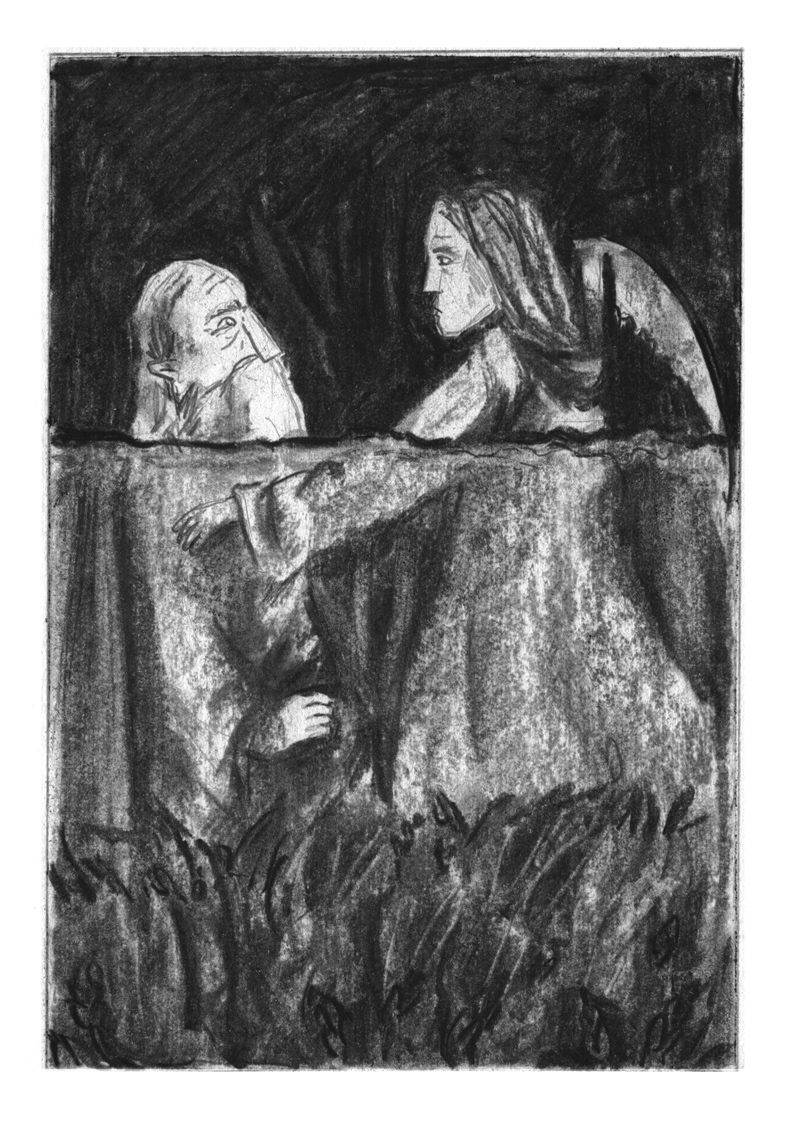 The Shovelman looked around at the tears already receding, and as he looked he saw that the wheat had begun to dissolve, fading away in the water. And the Reaper looked at him and smiled for the first time in forever and again.

So stalks fell once more in the Silent Wheatfields as the Reaper swung and the Shovelman scooped. And, as was his custom, the Shovelman would walk to the edge of the wheatfields, lay his head on the sack and sleep. His tears still soaked the sack, dissolving the wheat of the day, but as the water fell a smile would light his lips.

And the soil remembered the Shovelman’s flood and held his tears as sacred. This is why, to this day, we grow old before death and weep when we’re alone.